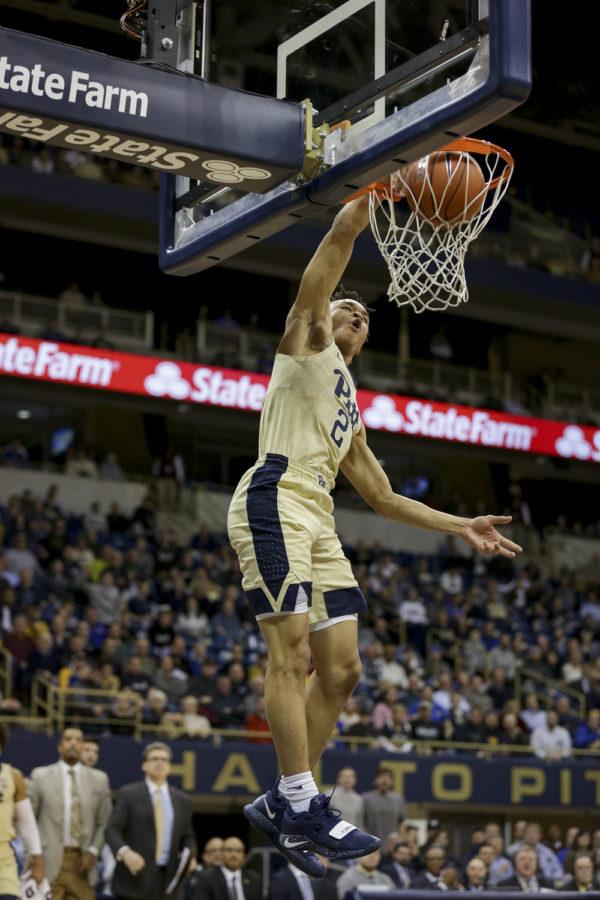 At the end of the second half before going into overtime, head coach Jeff Capel told his players to keep a strong face. They took that advice and ran with it, ultimately beating Louisville 89-86, ending an ACC losing streak that had lasted 690 days and beating the Cardinals for the first time since 2010.

Tied with 45 seconds left in overtime, Louisville’s redshirt junior Ryan McMahon took and missed a 3-point attempt that would have given the Cardinals the lead. First-year Trey McGowens got the rebound and took it to the basket, making a layup to make the score 88-86, giving Pitt its final lead of the game. First-year Xavier Johnson stepped to the line 22 seconds later, making one of his two foul shots, sealing Pitt’s victory.

McGowens led both teams with 33 points in the Panther’s win at the Petersen Events Center Wednesday night. Johnson was just behind him with 20 points.

“First of all, I’m really proud of my team,” Capel said. “And I’m really happy for them. I thought we were incredibly tough tonight against a really good basketball team … For us to play as hard as we did, as tough as we did, especially mentally and sort of big-time performances by just about everyone … these guys are fighting.”

With 26 seconds left in regulation, Louisville got the ball under its basket and made an inbound play, giving redshirt junior Dwayne Sutton the opportunity to tie the game and send it into overtime.

“I thought we generated some open looks,” Louisville coach Chris Mack said. “I thought we were aggressive and we got out of transition a few times and got to the rim … when we went on a little run we finally got a few stops, nothing to write home about, but we actually got some defensive stops in a row and that’s what allows you to get back in games on the road.”

In the last four minutes and 28 seconds of the second half, the Cardinals scored 14 points while holding Pitt to just two.

Seven of Louisville’s 12 points came from redshirt junior Steven Enoch, who finished the game with 14 points.

Louisville’s momentum was evident during the second half. The Cardinals outshot Pitt in free throws and in the field. Louisville shot 67.9 percent from the field and 81.8 percent from the line, while Pitt shot 61.5 percent and 42.9 percent in the same categories, respectively.

Part of the Panthers’ second-half troubles came from defense. While they did force 18 turnovers, Pitt also committed 26 fouls, including seven during the first 10 minutes left in the second half. The foul troubles forced Pitt to switch into a zone defense.

Louisville was 17-23, shooting 73.9 percent from the line. Christen Cunningham was 3-3 on line and led Louisville with 27 points. The Cardinals finished with 24 fouls, but Pitt was 16-33 from the line, shooting 48.5 percent.

“We have to make free throws,” Capel said. “We’ve been a really good free-throw-making team all year, tonight was weird. And so we will do a better job there, but we showed a lot of growth, and more importantly, we showed a lot of toughness tonight.”

After falling behind to start the game, the Panthers finished strong in the first half — led by McGowens, who scored 20 points, including eight in less than a minute. Pitt’s defense held the Cardinals to 9-29 from the field and 2-11 from three, shooting 31.0 percent and 18.2 percent in the first half, respectively.

“They came out and they played a lot harder than we did,” Mack said.

After leaving the game early due to an apparent ankle injury, McGowens came back and broke the record for the most points in a game by a first-year in Pitt history. The previous record was 29 points, set by Clyde Vaughn in 1980.

“I thought McGowens was incredible,” Capel said. “Especially in the first half and the start of the second and then he picked his spots from there.”

The Panthers will look to win their first back-to-back ACC win since Feb. 11, 2017, this Saturday at NC State. Tip-off is scheduled for noon.