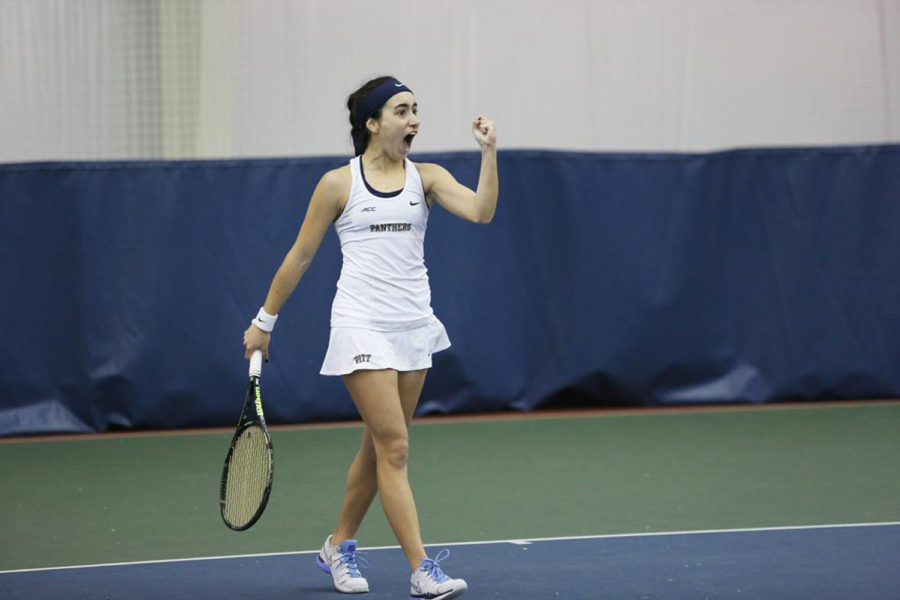 Gabriela Rezende is one of four seniors on the Pitt women's tennis team, which will play its last season this spring.

The Pitt athletic community received some tough news earlier this morning, as athletic director Heather Lyke announced that the University will be discontinuing its women’s tennis program after the upcoming spring season.

“This was an extremely difficult decision that was reached only after considerable research and evaluation,” Lyke said in a statement. “We have a responsibility to provide our student-athletes with the finest opportunities to compete and achieve at the highest levels. That, unfortunately, has not been the case with our women’s tennis program.”

The team has no on-campus tennis facility, instead commuting to Oxford Athletic Club in Wexford — about 30 minutes away — as its home venue.

“Our analysis concluded this is a hard but necessary decision to ensure the best student-athlete opportunities for growth and success in the future,” Lyke continued. “I have personally pledged to each member of our tennis program that they will have our University’s full support and assistance as they consider their future academic, athletic and personal pursuits.”

Head coach Alex Santos’ unit has struggled to make noise in the ACC since joining in 2013, notching a 1-69 conference record over the past five seasons. Overall, the program is a more respectable 23-79 in that time. Santos will remain in his role through the conclusion of this season.

Pitt’s roster — one of the most culturally diverse sports teams on campus — is currently composed of four seniors and three underclassmen. Each of the underclassmen will have the opportunity to stay on scholarship at Pitt, as long as they maintain academic eligibility. Should they wish to transfer, the University has offered to assist them in their academic and athletic pursuits elsewhere.

In accordance with Title IX regulations, the termination of the tennis program will usher in the beginning of the women’s lacrosse team, which Lyke announced will become a varsity sport starting in 2021-22.

Chancellor Patrick Gallagher expressed that although the decision was a hard one, he believes it is in the best interest of the University moving forward.

“These decisions are never taken lightly. They are also very difficult,” he said. “We are attempting to balance what is best for the women in our tennis program with what is best for our University as a whole. And we’ve come to realize that continuing this program undermines our commitment to future student-athletes who should be receiving the highest quality opportunities to compete and win.”