What are the odds: Bet on Foles, Rivers in NFL playoffs 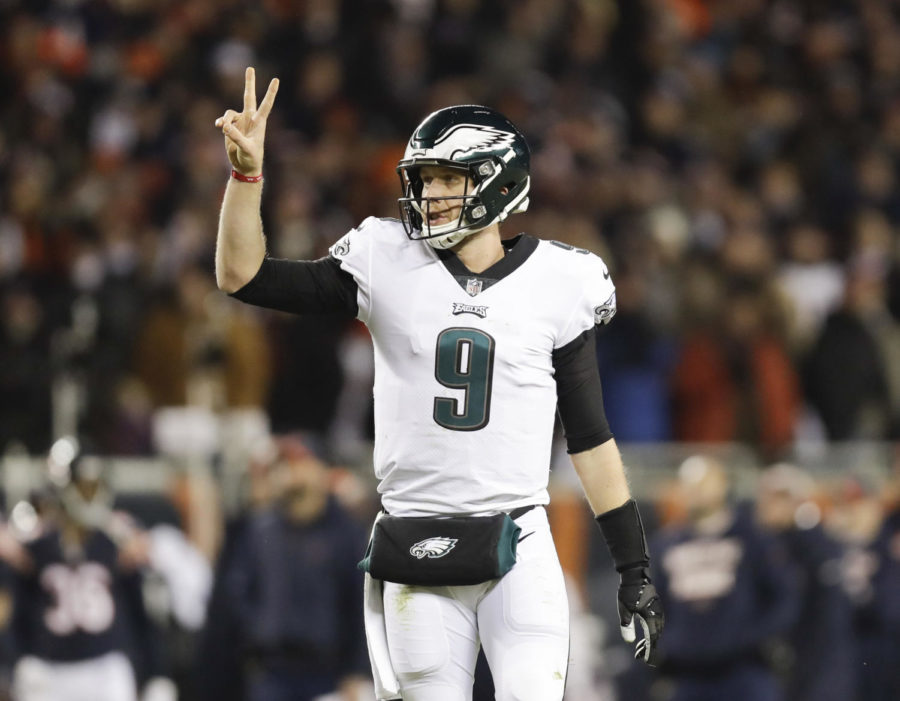 Eagles quarterback Nick Foles raises his fingers for a two-point conversion attempt against the Chicago Bears.

A new year means a whole new record for betting. Think of it as the beginning of a new season — everyone is 0-0 and can aspire to have a great gambling year. During the fall semester, my betting record was slightly above .500 after going 37-35. I’ll look to improve this season, with the goal to never have a losing record during the week.

The NFL postseason is heating up, as only eight playoff teams remain. On Saturday, the No. 1 seed Kansas City Chiefs will host the Indianapolis Colts with a trip to the conference title game on the line. Later that night, the Dallas Cowboys will travel to play the Los Angeles Rams in the NFC Divisional game. On the other side of the AFC playoff picture, the New England Patriots will face the Los Angeles Chargers Sunday afternoon. And the final game of the weekend will feature the defending Super Bowl Champion Philadelphia Eagles against the NFC’s No. 1 seed New Orleans Saints.

(Never bet before? Here’s two quick definitions. The spread is a figure oddsmakers set that predicts by how much a team is expected to win or lose. The over/under is a prediction of the final combined score of both teams.)

Analysis: After two straight win-or-go-home games, the Colts have been playing great football when it matters. They beat the Tennessee Titans in Week 17 of the regular season to clinch a playoff berth, then the Houston Texans last week in the wildcard round of the playoffs. If Andrew Luck continues to play at the high level we’ve seen this season, then another upset victory is in the Colts’ future. Running back Marlon Mack and tight end Eric Ebron will also need to continue their stellar play.

Chiefs’ quarterback Patrick Mahomes — the favorite to win MVP — has been like a video game cheat code all season long. He’ll make his playoff debut at home this Saturday afternoon, and it should definitely be one to remember. Kansas City’s high-powered offense will look to score as often as possible, forcing the Colts to try and keep up. The Chiefs have faced extreme adversity this season, cutting star running back Kareem Hunt following a domestic abuse incident. Luckily, the team is led by veteran head coach Andy Reid. He coached the Philadelphia Eagles from 1999-2012, including a Super Bowl appearance in 2004. Reid’s playoff experience should help calm the team’s 23-year-old quarterback and lead them to victory.

Bet: Kansas City should cover the spread and take the over.

Analysis: After a very successful regular season, the LA Rams are ready to start their playoff journey. Hopes are high in Los Angeles for a Super Bowl appearance, and their first step toward Atlanta is beating the Dallas Cowboys. LA running back Todd Gurley is ready to come back from injury and play like the Pro Bowler he is. Rams head coach Sean McVay has been an offensive genius all season and will look to continue his success.

Somehow, head coach Jason Garrett turned things around just in time for the Cowboys to sneak into the playoffs. They won the NFC North, which reassured Garrett would return next season as head coach. Behind a strong performance by quarterback Dak Prescott and running back Ezekiel Elliott, the Cowboys beat the Seattle Seahawks 24-22 last week. The Cowboys will need both stars to play well or it could be a blowout in LA — I’m predicting they’ll at least stay within seven points.

Bet: The Cowboys cover the spread and bet the under.

Analysis: The system for determining home-field advantage is one of the biggest flaws of the NFL playoff system. The top four seeds consist of division winners, with the remaining two teams given wildcard berths. What the NFL doesn’t account for is two teams from the same division that happen to have the best records in the conference. The Chiefs won the AFC West after going 12-4 and were awarded the No. 1 seed. Now, if we are going by AFC record standings, the Chargers had the second best record after going 12-4 also. But because they didn’t win the division, they got the five seed and now have to travel to New England instead of playing a home game.

For the game itself, the Patriots are nearly impossible to beat at home in the playoffs. Led by head coach Bill Belichick and 41-year-old future Hall of Fame quarterback Tom Brady, the Patriots could be on their last playoff run together. The Patriots and Chargers have a history of facing each other when it matters most — but the Chargers’ quarterback Philip Rivers is 0-7 versus Brady and the Patriots. I’m confident that this will be the one win that Rivers finally earns. The Chargers have one of the best offenses in the NFL, and it’s time for Rivers to have that offense click in the playoffs.

Bet: The Chargers will cover the spread and bet the over.

Analysis: How could anyone bet against Eagles quarterback Nick Foles in the playoffs? Last week, Philly came back and beat the Chicago Bears on the road thanks to a tipped field goal as time expired. That win put Foles and the Eagles’ current postseason streak at four straight victories dating back to last season. The offense struggled for most of the game last week, until Foles led the team downfield to score and take the lead with a touchdown pass to receiver Golden Tate. But all good things eventually come to an end — and it looks like Philly’s impressive run may wrap up in New Orleans on Sunday night.

The Saints have been dominant the past two seasons behind veteran quarterback Drew Brees and dynamic running backs Alvin Kamara and Mark Ingram. Their passing offense will look to dismantle a Philly defense that has dealt with injuries all season long. Brees will show that he’s just a bit too much for the Eagles to handle, and lead the Saints to victory.

Bet: Philly covers the spread and bet the over.

All odds taken from https://www.oddsshark.com/nfl.