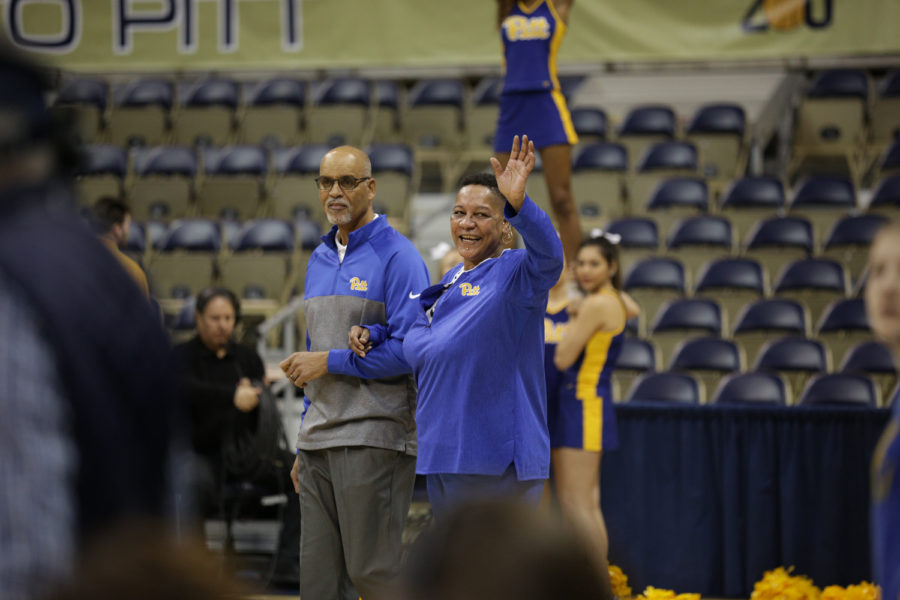 Lorri Johnson became the first woman in Pitt basketball history to have her jersey retired.

While the Pitt women’s basketball team played a more competitive match than in its first two ACC games, the Panthers still couldn’t get the win against Boston College and fell in a close 59-55 contest Sunday afternoon at the Petersen Events Center.

The Panthers (9-8 overall, 0-3 ACC) scored more than 50 points in conference play for the first time this season. But a few missed shots on offense — especially from the foul line, where they shot just 50 percent — cost them a chance to end their lengthy ACC losing streak at 10 games.

Pitt looked like the better team out of the gate, quickly taking a 10-3 lead in the first quarter. Seniors Cassidy Walsh and Kauai Bradley were Pitt’s initial contributors, scoring four points each during the run.

Junior guard Taylor Ortlepp’s 3-pointer put a stop to the Panthers’ run, and a basket in the paint from junior forward Emma Guy got the Eagles back in the game cutting the lead to two. Pitt countered with a 3-pointer from junior guard Jasmine Whitney and a mid-range jumper from senior forward Danielle Garven to end the first quarter with a 15-8 lead.

The second quarter saw a resurgence from Boston College, with the Eagles eventually taking the lead entering halftime. After both teams traded opening baskets, Boston College scored six unanswered points to take a 20-19 lead with 5:35 to go in the quarter.

The rest of the quarter was split almost even, with the Eagles having a 9-8 advantage and going into the half with a 29-27 lead. Whitney converted an and-one layup which briefly gave the Panthers the lead, although Boston College responded with a bucket from Guy and a 3-pointer from sophomore guard Milan Bolden-Morris.

The highlight of the half came just before the buzzer sounded. With time ticking down, Whitney was forced to take a contested shot from just beyond half court. It somehow banked in, cutting Pitt’s deficit to two points at halftime.

Pitt retired the No. 24 jersey of former player Lorri Johnson during halftime, making her the fifth basketball player — and first woman — in program history to have their jersey retired. Johnson scored a school-record 2,312 career points from 1987-1992. Head coach Lance White was excited to see a female player finally gain the recognition of having a jersey retired.

“I think there have been really great players at Pitt that need that honor, so now that we can continue that as the players have someone to look up to,” White said. “So I’m extremely excited for Lorri and our administration for honoring her, and I think that it’s a huge step in our program to have someone up there.”

The third quarter saw the Eagles gradually extend their lead. Guy continued to be their star contributor, showing why she’s the ACC leader in field goal percentage by shooting 3-4 in the quarter and bringing down three rebounds.

The Panthers, meanwhile, shot an ugly 5-16 from the field in the third. Even worse, they made just one of their seven free throws. While the poor shooting hurt them, Pitt’s stellar defense kept them in the game, as both Bradley and Whitney had three steals each in the quarter, and forced Boston College to make 10 turnovers.

The Panthers forced 15 steals in the game, which was the third time this season they’ve had at least 15 steals in a game. Whitney, who led with six in the game, talked about how the team as a whole has been making defense a big part of their game.

“For us a big emphasis has been put on communication and just outworking the other team,” Whitney said. “I think it’s important for us offensively to get stops on defense and that helps generate our offense a little bit more. So we’ve been trying to put a big emphasis on defense.”

After entering the fourth quarter up 44-39, the Eagles jumped out to their biggest lead of the game at 52-42 with 6:04 remaining. First-year guard Makayla Dickens started the quarter with a 3-pointer to put them up by eight, but Garven made a free throw and a layup to cut the lead back. Boston College got the lead up to on a 3-pointer by Bolden-Morris and a layup from first-year forward Taylor Soule.

The Panthers spent the rest of the quarter trying to cut into the lead. Whitney made a free throw and Walsh made a 3-pointer to bring the lead down to six. The margin remained that way with 50 seconds left in the game.

Pitt failed to take advantage of Boston College’s missed free throws, as Walsh missed a reverse layup with 35 seconds left and Nelson missed a 3-pointer with 27 seconds left. Both Whitney and Nelson hit big 3-pointers with in the final minute of play, but Soule made all four of her free throws with 18 and 13 seconds left to keep the Panthers at bay.

With Boston College leading by four, Lowery missed both of her foul shots, but a 3-pointer from Whitney with five seconds left was no good, giving Pitt another ACC loss.

Even though it seemed hopeless for the Panthers to make a comeback in the game, Bradley said that the team kept a winning energy until the final seconds.

“One thing we always talk about is energy,” Bradley said. “So I think that was a big part of it and then we were so amped up because we wanted it and we were working so hard. So that contributes to us playing with so much passion and heart.”

Pitt will play the second game of its four-game homestand, and look to get its first ACC win of the season, on Thursday against No. 12 Syracuse at 7 p.m.