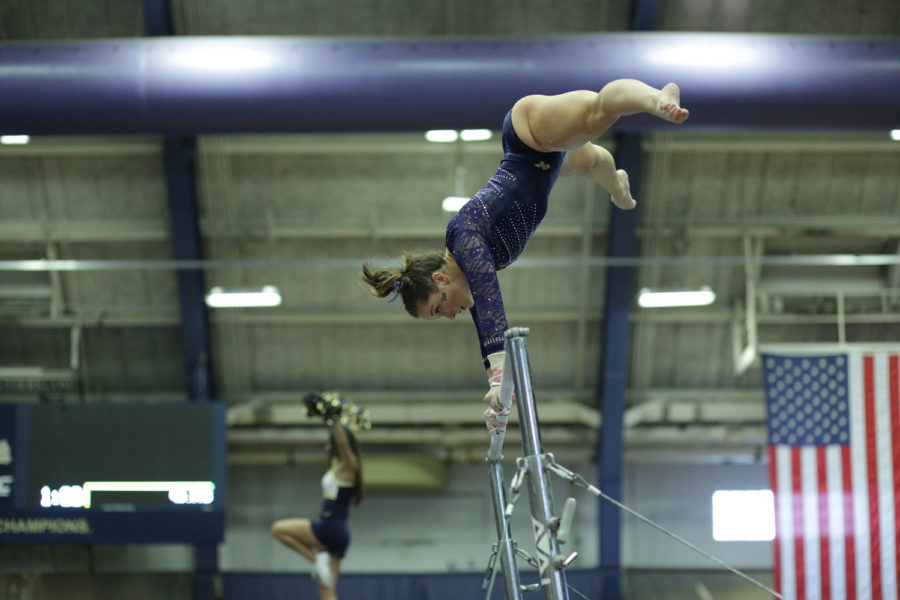 Sophomore Haley Brechwald, pictured here at a Jan. 20, 2018, meet vs. New Hampshire, received a score of 9.850 on vault. This score tied her career high for a fifth time.

By Kate Hall and Trent Leonard

Several of Pitt’s athletic teams put on a strong showing over weekend, with the gymnastics team breaking multiple program records and the wrestling team continuing its dominant start to the season. In addition, several athletes on the track and field team took home individual victories.

Pitt gymnastics started its season Saturday by hosting a quad meet at the Fitzgerald Field House. The Panthers finished second out of four total squads, with their team score of 194.750 setting a new program record for a season opener. Two Panthers also earned individual titles.

Pitt’s best performances came on the beam, where three Panthers placed in the top five. West’s first-place score of 9.800 was especially remarkable, considering this was her first meet since 2017 after missing last season with an injury. She was followed by senior Lucy Brett, who finished second with a 9.725 and Miller, who tied for fourth with a 9.700. Pitt won the event with a team score of 48.575.

Miller went on to post scores of 9.800 on vault and bars and 9.750 on floor, giving her a total score of 39.050. That was good enough to win the individual all-around competition for the day.

On vault, Pitt had six gymnasts compete with only one placing in the top three. In a three-way tie for third place, sophomore Haley Brechwald received a score of 9.850 — tying her career-high for a fifth time. West Virginia swept the top two in the category with senior Kirah Koshinski receiving a 9.925 and senior Jaquie Tun with a 9.900. The Panthers finished the event with a team score of 48.950.

The Panthers placed two girls in the top five on the uneven parallel bars. In a three-way tie for second place, Miller and Brett finished with 9.800 points each, tying with first-year Esperanza Abarca from West Virginia.

On the floor exercise, Pitt had just one gymnast crack the top five. Senior Charli Spivey tied for fourth with sophomore McKenna Linnen from West Virginia at 9.850 points — a career high for Spivey. In the last event of the day, Pitt closed out the meet with a 48.375 total on floor.

The Panthers’ final score of 194.750 edged out the previous home opener record from 2018, 194.125. The crowd level at the Field House also broke records, as it was the highest turnout in Pitt gymnastics home opener history with 1,249 fans in attendance.

Up next, Pitt will head to New Hampshire this Friday, Jan. 18, for the New Hampshire quad meet. The team will face fellow EAGL squad and host team New Hampshire, as well as Bridgeport and Temple.

Pitt improved to 7-0 for the first time since the 1986-87 season with a win against the Bison, avenging last year’s 28-11 loss with a 22-11 victory. After getting down 11-9, the Panthers stormed back to take the final four matches in the 174-pound, 184-pound, 197-pound and heavyweight divisions. No. 13 heavyweight junior Demetrius Thomas continued his impressive season with a resounding 14-5 victory in the final bout.

First-year Brendon Fenton contributed the team’s biggest victory of the day, dominating his 149-pound bout by a 14-0 margin.

The win extended Pitt’s undefeated streak to 8-0 on the season, while dropping the struggling Jackrabbits to 1-5.

Next up, the Panthers will look to stay undefeated when they take on Oklahoma State at home Saturday beginning at 1 p.m.

In its first meet since Dec. 7, the Pitt track and field team continued its indoor season by traveling to Penn State to participate in the Nittany Lion Challenge. Although there were no team standings, the Panthers took first in three events while placing well in several others.

The women’s team shone especially in the 400m race. Sophomore Nikki Scherer finished first in a time of 56.23, followed by first-year Flora Ahiarakwe in third and junior Aysha Muhammad in seventh.

Pitt’s other top-three finishes included junior Shyheim Wright finishing the men’s 60m hurdles in 8.07 seconds to take third, first-year Sydni Townsend taking second in the 800m run with a personal-best time of 2:13.70, and the women’s 4×400 relay team taking second with a time of 3:46.48.

The Panthers will travel to Blacksburg, Virginia, next weekend to participate in the Hokie Invitational on Jan. 18 and 19.