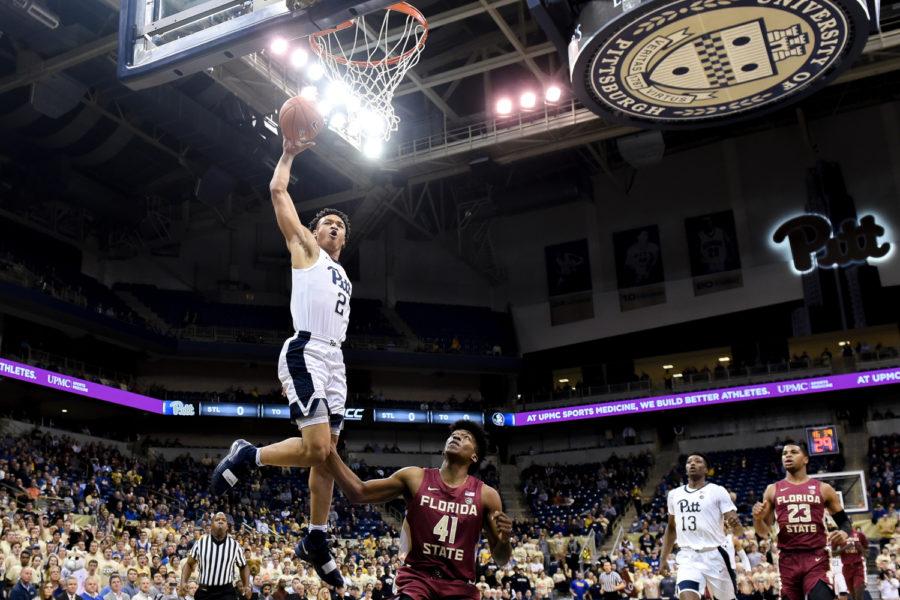 Pitt won its second ACC game this season when it upset No. 11 Florida State 75-62 at the Petersen Events Center Monday night. The Seminoles (13-4, 1-3) were the second of back-to-back ranked opponents for Pitt (12-5, 2-2), which entered the contest coming off a tough six-point loss at the hands of North Carolina State.

“We fought, we were together, we showed toughness and it was a big time win for us,” Pitt coach Jeff Capel said. “For our guys to respond after a very emotional loss on Saturday with only one day of preparation and come back like this is big-time.”

Pitt initially struggled from the outside to start the game, missing its first four shots, three of which came from behind the 3-point line.

Florida State’s aggressive defense did it no favors, preventing Pitt from penetrating the interior. First-year guard Xavier Johnson finally found his way inside after Pitt was down 6-0 with 17 minutes and 16 seconds left in the first half.

After getting down early, Pitt managed to keep its head in the game. First-year Trey McGowens described the game as “fearless.” Capel also used the term to describe his players.

“We weren’t afraid in any of those situations. Doesn’t mean we always played great,” Capel said. “I don’t think these guys have been afraid from day one.”

Johnson, who finished with 18 points, was fouled on his attempt to score inside and made both shots, making the score 6-2.

Meanwhile, Florida State’s defense continued to stifle the Pitt offense, taking away passing lanes and preventing penetration in the first half of the game. The Seminoles were able to keep Pitt from scoring a field goal for more than five minutes to start the game until Johnson found his way inside with 14:50 to play.

Florida State answered quickly, as Seminole senior center Christ Koumadje rebounded a block from Pitt’s sophomore forward Terrell Brown and put it back in the hoop.

Pitt finally found its groove 11:28 into the first half when McGowens made a 3-pointer to give the Panthers a 13-12 lead, their first of the game.

McGowens led both teams with 30 points, making this his second 30-point game in five days.

Free throws were key to the Panthers’ win. Pitt was 38-46 from the line, shooting 82.6 percent. The Panthers made their first eight free throws during the game, continuing their hot streak from the NC State game, where they were 24-28.

Both teams turned the ball over 12 times, but Pitt managed to get the Seminoles off pace in the first half of the game, forcing five turnovers in the first eight minutes of the game. The Panthers also took better advantage of Florida State’s miscues, scoring 11 points off turnovers compared to the Seminole’s seven.

Despite shooting just 34.78 percent from the field in the first half, Pitt went into the locker room with a 36-34 lead.

A key to the first half was the turnover battle, Pitt turned the ball over just four times while forcing eight turnovers. In a game where Pitt was outmatched in terms of length and therefore outrebounded, it was crucial for it to create extra possessions and turn defense into offense.

Florida State ended a two-minute scoring drought to start the second half when redshirt senior forward Phil Cofer made a jump shot to tie the game 36-36.

Florida State took its first lead of the half with 12:06 left to play when junior guard Trent Forrest, who led the Seminoles with 19 points, made a pair of free throws.

McGowens responded by taking the ball to the basket, getting another foul call and making both free throws to get Pitt’s lead back, making the score 46-45. McGowens, a 75-percent free-throw shooter, went 18-19 from the line Monday night.

Johnson also put together an impressive performance from the free-throw line, converting on all 10 of his opportunities.

Brown helped the Panthers put the game away with 7:10 left to play when he dunked to give a 10-point lead and make the score 60-50.

Florida State went on a 5-0 run and got within five points with 4:25 left to play. But that’s as close as it would get, as Pitt outscored the Seminoles 15-7 in the final minutes.

“I think the people in Pittsburgh should be very happy that they have a guy in Jeff [Capel] who has come in and brought their swagger back that Pitt has been accustomed to for a number of years,” FSU coach Leonard Hamilton said. “He deserves to be congratulated.”

The Panthers will be looking to get their first ACC road win of the season on Saturday when they tip off against Syracuse at 2 p.m.