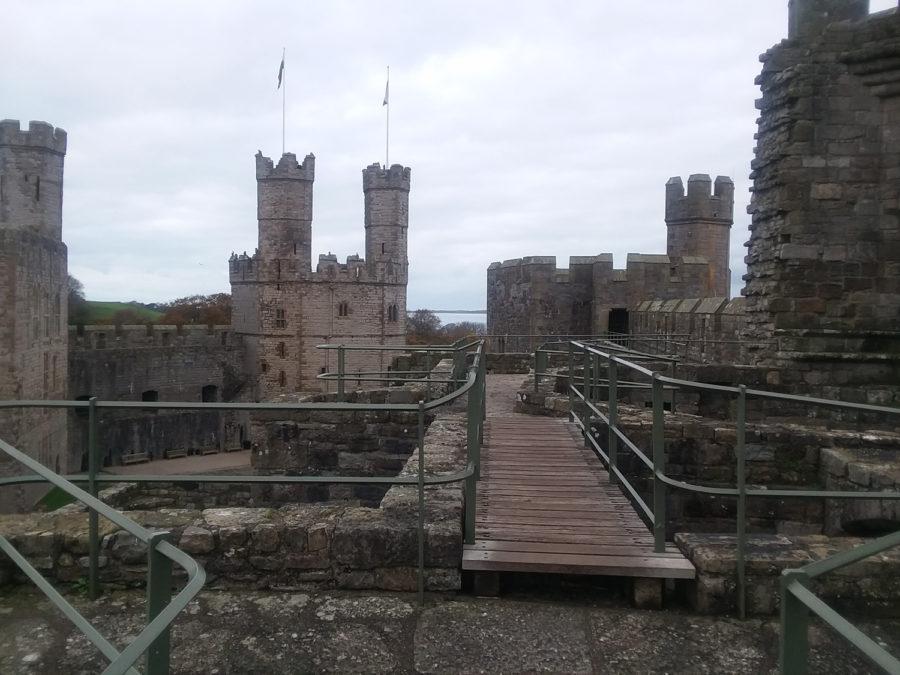 Visitors can climb the towers of Caernarfon castle that sit atop the medieval fortress located in north-west Wales.

I have harbored a deep love and appreciation for the U.K. since I was a child. I developed a passion for Arthurian myths and legends, and British film, television and book series like Peter Pan, Sherlock Holmes, Harry Potter and The Chronicles of Narnia.

Besides my love for the U.K. and the many captivating fictional narratives it’s home to, a driving factor in my decision to study abroad was hearing from all of the seniors and alum who said their one regret was not taking the opportunity to travel. I didn’t want to have the same regret, especially when I knew I had the ability to study abroad.

Pent up inside me was a burning desire to experience the wonder of this culture that I had only ever seen and imagined through fiction. Even though at first the thought of being so far away from home was scary, I knew I wanted to go more than anything.

So I planned to study abroad the fall term of my junior year through the English department’s Pitt in London program. They partner with CAPA — a global education network stationed in various cities around the world. I applied, attended several informational meetings and discussed my plans with my adviser before I left for my program at the end of August.

My mom flew with me to London a week and a half before the program started to get me settled in the city. Early in the morning of Sept. 5, we shared a tearful goodbye at Heathrow Airport and she gave me her cross necklace to wear before she flew back home. I spent the rest of the day repacking and going over my schedule for what was to come. I was nervous to be on my own, but I felt excited to spend the next three months in London.

I wanted to make the most out of my experience by giving myself time to explore and have fun, so I scheduled classes Monday through Thursday, assuring I would have free time on Friday. Every Friday morning I went to work out at Psycle, an indoor cycling studio, and after I would get breakfast and explore some part of London by foot. Sometimes I shopped for souvenirs or visited the many museums throughout the city — nearly all of which are free to the public.

I took five classes at CAPA that centered around various aspects and idiosyncrasies of British literature, history and culture. Each of my classes took various field trips throughout the city, including trips to Abbey Road, Camden Market and the iconic London Eye.

But perhaps one of the most memorable trips was to the South Bank with my Writing the City class. To engage with the city with all our senses, our professor instructed us to spend three hours walking from one end of the south bank of the Thames to the other. While we walked, we watched various artists begin and complete elaborate sand sculptures, marking the time gone by.

The sand artists set up buckets below the railing for people to throw in money. I stopped and stared. The talent and dedication this took without promise of compensation was awe inspiring.

There were a few excursions students could go on throughout the semester. One of them went to Stratford-upon-Avon and Oxford. Stratford-upon-Avon is Shakespeare’s birthplace, and Oxford, aside from being a famed and historic university, is where many movies and television shows are filmed, including “Harry Potter,” “X-Men: First Class” and “A Discovery of Witches.”

Actually being in the place that I had only seen through the lens of film and television was like a dream to me, and in mid-October, I went on a Warner Bros. Studio Tour London that consisted of sightseeing places shot in the Harry Potter films along with some of the sets.

It also included me being a huge nerd. I loved every second of the tour, and being at the studio was like stepping into a world full of childhood wonder. I’ll admit, several times during the tour I couldn’t hold back tears.

Because I grew up loving Arthurian myths and legends, one of my favorite television shows is BBC’s “Merlin.” The two main cast members — Bradley James (Arthur) and Colin Morgan (Merlin) — went on a trip across Wales to see various locales related to the legend. Their trip inspired me to go on one of my own during our week-long fall break. I planned a four-day itinerary to travel north from Newport to Bangor all by myself, traveling both by train and bus in between each stop.

On the first day, I went to Caerleon — a Roman town that was said to be one of the many possible sites of Camelot. Legend says that after the Romans left Britain, Arthur set up court at Caerleon and that a thousand of Arthur’s soldiers are sleeping underground waiting for when Wales is in need of them. The next day I visited Carmarthen — supposedly Merlin’s birthplace. According to Arthurian lore, Merlin was born there by a human mother and a spirit. In the main town square, a carved wooden statue of Merlin stands to greet pedestrians.

The third day was filled with typical tourist activities as I stopped at the Corris Craft Centre in Snowdonia National Park to see King Arthur’s Labyrinth — a story tour that went beneath the surrounding mountains and through narrow winding caverns telling Welsh tales, including Arthur’s time as king, through staged sets within the cavern. While this was not a site of fictional or historical relevance, experiencing these stories in this new and interactive way was something truly memorable for me.

My plan from there was to take buses up to Dinas Emrys — an important site in legend where young Merlin foretold of the red and white dragons battling beneath the hill. Unfortunately, I got caught an hour behind — thanks to daylight saving time — and it got pitch black at about 4:30 p.m. I made the difficult decision to go to my Airbnb in the next town, Caernarfon, and skip Dinas Emrys for the time being. While that upset me, the next day I discovered the amazing Caernarfon Castle and gleefully spent the morning scouring every inch of it, climbing every one of its towers.

I could rant forever about everywhere I went and everything I loved about my time abroad. I really did love everything, even the stressful and frustrating parts. It was truly a life-changing experience because traveling alone to places I always dreamed of fostered my sense of self-confidence and independence, and it was one of the greatest highlights of my time in college as well.