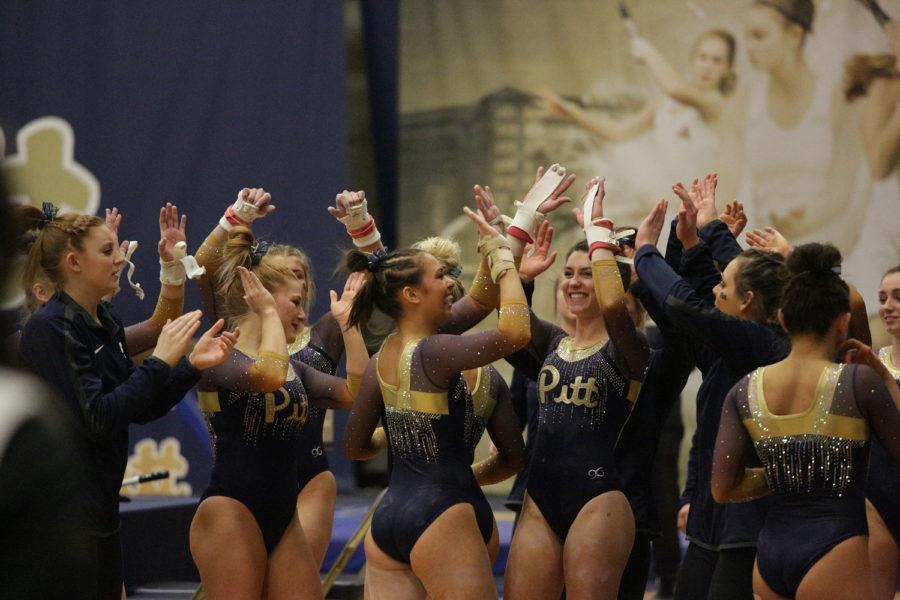 One of the major differences between college and club gymnastics is that in college gymnastics, gymnasts compete for a team rather than individually.

For a lot of college-bound athletes, being the center of attention on their high school team usually guarantees recruitment offers from multiple schools. But gymnasts who want to make it to the NCAA should stay away from high school teams.

In fact, a lot of high schools don’t even have a competitive gymnastics program. In the gymnastics world, the path to success lies in joining a club team.

For Pitt gymnastics head coach Sam Snider, the best place to recruit potential collegiate gymnasts is at the Junior Olympic National Championships in the spring. This meet hosts the best Level 10 athletes — the highest level of competition in non-Olympic gymnastics — from the country’s eight regions.

But winning nationals doesn’t automatically mean you’ll get invited to compete for your dream college.

Attitude assessment is crucial for determining if an athlete can fit in with a gymnastics team and Snider prioritizes a positive and hard-working attitude as much as having a high skill level. There isn’t any room for slackers or troublemakers.

Gymnastics demands not only technical skills, but also mental and emotional strength, and superb time management. All of this starts at a very young age for gymnasts, since it takes a long time for people make it to Level 10 by their high school years.

Olivia Miller, a first-year who competes in the all-around for Pitt gymnastics, said she is very thankful for her club coach, Ryan Schulz of Pittsburgh-based Gymkhana, for helping guide her through all the ups and downs of club gymnastics.

“She made me mentally and physically tough,” Miller said. “It requires a lot to start out young and then go all the way through high school with gymnastics, and she really helped me with the whole recruiting process.”

Young gymnasts only compete in a few meets each year, and have fewer chances to get noticed by colleges than athletes from sports like basketball or baseball. Because of that, gymnasts looking to be noticed by recruiters need to focus most on their individual performances — a significant difference from the environment of college gymnastics.

Senior Charli Spivey competes on vault, beam and floor for Pitt, and trained in high school with Alabama Elite Gymnastics Academy, a club with a long-standing reputation for producing collegiate-level athletes. College gymnastics was always Spivey’s dream, and to get there, she focused on herself.

The difficulty in transitioning from the mindset of individual to team success depends on multiple factors, according to Snider, like how long an athlete has trained with their club coach, how much they trust their new college coach and how quickly they “buy in” to the program they’ve entered.

“We do a lot of team building, a lot of things outside the gym to get to know each other, with our athletes amongst each other, and then also us as coaches,” she said.

For athletes like Spivey, though, buying into the Pitt gymnastics environment after her club experience was easy.

“It’s such an easy transition because all of a sudden you’re brought into this family, you’re in this team atmosphere, and it’s so much more fun because the purpose is so much different,” she said. “All of a sudden, your goal is to fight for something that’s more than yourself, and I love this atmosphere. I love that when I go out there and compete, it’s not about me anymore — it’s about pushing toward goals for our team. And doing that is just so much more rewarding.”

Miller also transitioned easily to the family atmosphere at Pitt. She said Gymkhana’s competitive team is small, which made the competition and team aspects have interesting dynamics. But that experience ultimately helped her when she joined Pitt gymnastics.

“You want to be the best, and you don’t wish bad on anybody, but it’s definitely a competitive nature,” she said. “So being on a small team, you become really close and really support each other … yet I’m also competitive with them and we push each other to be our best.”

While “best” in gymnastics is pretty objective — scores on each event are out of 10 points and the highest score wins — scores aren’t the most important indication of fitting into a college gymnastics program.

“We call ourselves a ‘teaching program,’ meaning we want to continue to push new skills, teach new skills, train new things, and our goal is to have you at your very best by the time you graduate,” Snider said. “We don’t want you to have peaked before you got here.”