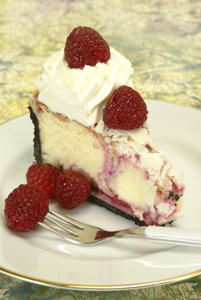 Now that cocktail hour starts while it’s light outside, summer is the perfect time to stop sipping on stodgy drinks meant for dark bars and start enjoying the lively taste of fruit. Even if you’re not one for the cloying sweetness of watermelon or peach, there are recipes available for both adventurous and more reserved palates.

The benefits of buying seasonally are myriad. Buyers are more likely to get produce locally, which means it’s been plucked off the vine or picked from the tree — however it’s harvested — later than if it were transported a long distance. This translates to more ripe and succulent produce. Essentially, the taste and texture will be better.

Of course, eating seasonally and locally means there won’t be strawberries all year, but that just means you’ll appreciate them more when you can get them.

From July through September, peaches are in season in Pennsylvania, conveniently in the same season as raspberries. This makes them deliciously compatible partners for nibbling on as snacks.

Obviously a green peach isn’t ready, but redness doesn’t necessarily mean ripeness. Look for a peach that smells sweet with a little give when you press it lightly.

As for raspberries, make sure they are red and firm — you don’t want them to be soft and shapeless. Also, make sure there’s no mold in their container, as it will spread easily.

Mix wine and sugar and stir until sugar is dissolved. Add brandy, peaches and lemons to the wine-sugar mixture. Cover and refrigerate for several hours. Before serving, add in club soda or ginger ale. Add raspberries and ice to glasses, pour sangria over top and serve.

Watermelons start bounding into ripeness around August and last until October in Pennsylvania, so that’s when you’ll find the tastiest locally grown varieties.

To ensure a ripe watermelon, look for the flat part that laid on the ground to be yellowish in color, or seek out one with a duller skin color. Finally, pick it up — you’ll want it to feel a little weightier than you’d expect for its size.

Freeze one cup of watermelon into cubes to use as garnish. Blend the remaining four cups of watermelon and strain into pitcher. Combine gin, ginger ale and lime juice. Add the frozen watermelon to four glasses and divide the drink evenly between them. Garnish cocktails with a slice of lime.

Cucumber season lasts from July through October, so there’s plenty of time to sip on this not-too-sweet cocktail.

Look for dark green cucumbers that aren’t yellow in color. Look for one that isn’t particularly fatter in the middle toward the end, as it will be less flavorful. And cucumbers should be firm to the touch; soft spots indicate it’s too ripe.

Muddle together the mint, lemon and sugar. Add in cucumber and let sit for 30 minutes. Mix in vodka, juice and water, stirring until sugar dissolves. Chill 30 minutes before pouring over ice and serving. Top with seltzer water for a spritzer.

Blackberries last from July through August, so now is a great time to sip on this adventurous and spicy libation. Look for blackberries that have a firm, fat shape and aren’t overripe enough to be deflated. They should be shiny.

Jalapenos will be ripe at the same time, though their season lasts longer. They should be green, smooth and firm with no soft spots. The lines that sometimes appear on them aren’t blemishes: They’re signs of the heat and age.

4 to 8 jalapeno strips, depending on desired spiciness

Blackberries and limes, sliced for garnish

Combine jalapeno (4 to 8 strips depending on how spicy you want the drink), blackberries, lime juice and lime halves and mix together. Add tequila and agave and then shake until well-combined. Strain and pour over ice into four glasses. Garnish with blackberries and lime wedges.