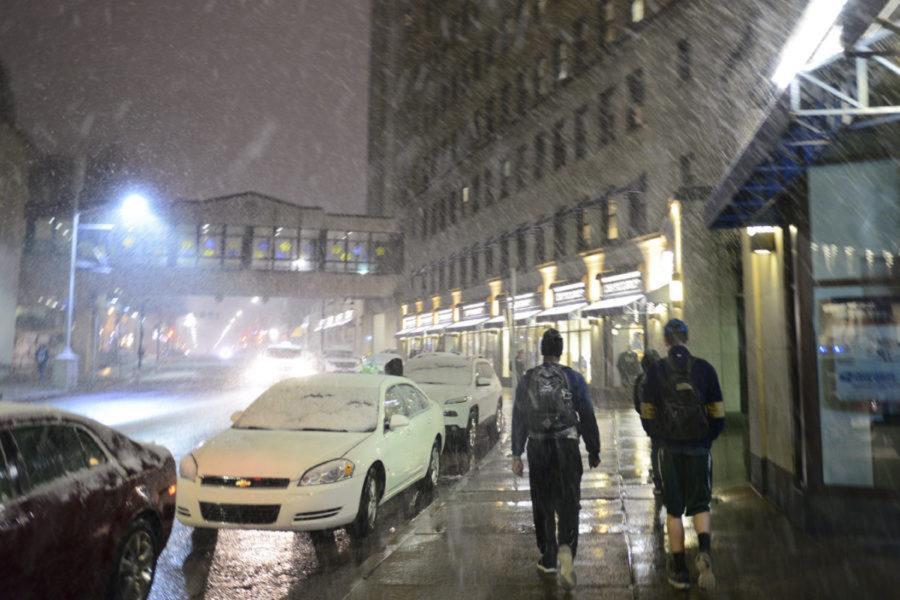 This spring semester had a hot start. Jan. 8, the day after classes started, saw a high of 58 degrees. But the next day, the temperature dropped more than 30 degrees to a low of 22.

Pittsburgh weather is notoriously mercurial. Last year was the wettest year on record, breaking the previous record of 57.41 inches on the last day of the year. Temperatures vary drastically as well, with summer highs topping 90 degrees and winter lows bottoming below zero.

Pittsburgh set a new precipitation record in 2018 with a total accumulation of 57.41 inches. Graphic by Shane Raible | For The Pitt News

But there’s order in the chaos of Pittsburgh weather. Temperature drops such as those at the beginning of this semester occur often. According to data from Penn State’s College of Earth Sciences, there were 10 examples of such temperature drops during the winters of 2017 and 2018 alone, including one from Jan. 19-20, 2018, when the temperature dropped from a high of 58 to a low of 8.

Weather patterns that produce these temperature-drop events follow general trends that accurate forecasting software can predict, according to Kristin Emery, a meteorologist for KDKA.

“During winter months, Pittsburgh and the rest of Pennsylvania experience large fluctuations in temperatures as a result of the passage of warm and cold fronts as part of large-scale weather systems,” Emery said in an email. “Often, a large system will contain a warm sector first bringing mild temperatures and even rain followed hours or a day later by a trailing cold front, turning the precipitation into snow and dropping temperatures by 20 or more degrees.”

Individual weather systems in Pittsburgh typically originate in the Pacific Northwest and traverse the country, Emery said, but cold spells come from colder areas like Canada and the Arctic. The overall character of a winter season is dictated by global climate patterns that affect large swathes of the United States.

“Large-scale patterns can greatly influence our winter weather, such as El Nino or La Nina,” she said, referring to Pacific Ocean temperature patterns that control weather across the United States. “These can last a few months or even longer leading to big changes in the amount of snow versus rain over the course of a winter and greatly affecting our daily high temperatures.”

Extreme temperature events in Pittsburgh tell a complicated story, according to Yuchuan Lai, a second-year graduate student in civil and environmental engineering at Carnegie Mellon University. He said all measures of extreme temperature — highest maxima and lowest minima — have actually decreased in Pittsburgh since the beginning of historical records in the 1870s, despite the warming planet.

Pittsburgh experiences several extreme drops in temperature during a normal year. Graphic by Shane Raible | For The Pitt News

There are many reasons why extremes could have decreased, Lai said. One explanation is that the measurement location moved twice, from downtown Pittsburgh to Allegheny County Airport and then to Pittsburgh International Airport, which could potentially affect the continuity of records.

Lai said rapid changes in temperature can pose problems, particularly to electricity distribution systems, as they will need to rapidly adjust to different heating demands.

“You will cause the energy supply problems,” Lai said. “The heating system [and] the electricity depend on what the temperature is outside.”

Temperature drops can also affect day-to-day travel. When temperatures dip below 32 degrees, any water on roads can freeze and make commutes dangerous. And when temperatures cross the freezing barrier frequently, any snow on the ground can melt and refreeze, increasing the likelihood of icy conditions.

But the City of Pittsburgh is accustomed to dealing with the variable winter weather. Michelle Schoenhardt, an administrator in the Street Maintenance Bureau at the Pittsburgh Department of Public Works, said the City has game plans in place for all types of winter weather.

“We get information from a national weather center that gives us daily reports as well as upcoming reports,” she said. “Depending on the temperature, we will apply different things to the street.”

The type and severity of winter weather can drastically change the street treatment plan. The most common salt the City uses is regular rock salt, or sodium chloride, but this salt has its limitations.

“It only works to a certain temperature,” Schoenhardt said — 15 degrees, according to the State of Minnesota. “Once it gets below that temperature, it doesn’t work.”

Schoenhardt said the City is able to adapt to different winter weather scenarios by using various types of salt that function at different temperatures. Among these is liquid calcium chloride, a de-icer that functions down to -25 degrees, below the coldest temperature ever recorded in Pittsburgh. Another is Fire Rock, a blue-tinted salt composed of magnesium chloride and sodium chloride. Due to the different chemical properties of this salt, it functions at lower temperatures and sticks to the road better.

Though the high variability of Pittsburgh winter weather makes commuting and travel more unpredictable, it provides excitement to those who are passionate about weather.

“I remember one advertisement for a weather forecast position in San Diego that I read years ago asking for someone who could make sunny and 72 degrees sound exciting year-round,” Emery said. “Part of what makes forecasting winters and year-round weather in Pittsburgh so interesting is the changing seasons and varying weather patterns.”