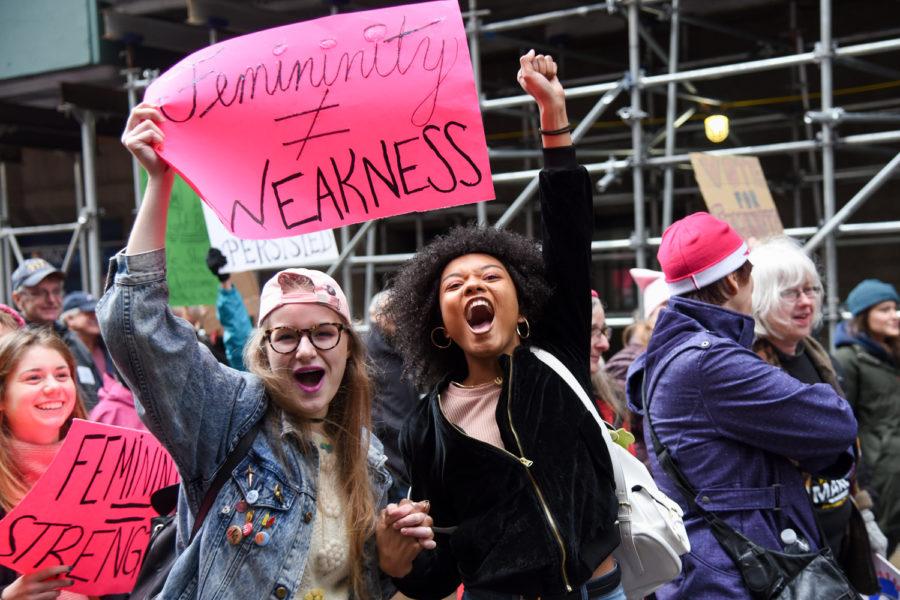 Two marchers cheer while passing through downtown Pittsburgh during the 2018 Women’s March.

Pittsburgh’s third annual Women’s March will take place Downtown this Saturday from 11 a.m. to 2 p.m., one day shy of the two-year anniversary of Trump’s inauguration. According to head organizer Tracy Baton, this year’s march promises to attract the same energy and turnout as last year.

“Pittsburgh really shows up,” Baton said. “Last year we had the same turnout as Philadelphia, a city five times bigger than ours.”

Baton credited Pittsburgh’s unity for drawing such a massive gathering. She said the organizing team carefully crafts a theme for each year’s march — one that combines current political issues and setbacks women have always faced.

Between the government shutdown and Trump’s continued push for what Baton called a “racist border wall,” she said marchers have plenty of new things to protest — and not just women’s issues.

“This year’s theme is called ‘Building Bridges: Stronger Than Hate’ because not only do we care about problems specifically affecting women, we care about injustices plaguing all identities,” Baton said.

The march’s national leadership has been accused of anti-Semitism, and past marches have faced accusations of prioritizing issues that affect straight, white, cisgender women.

But Baton said organizers of the Pittsburgh march have worked hard to represent the LGBTQ+ community and people of color.

The goals of the march have expanded since its first year, Baton added.

“The 2017 march was very simple,” she said. “Hear our voice, hear what women have to say, listen to our grievances because we are not happy with the current cultural climate or the administration.”

While 2017’s march in Washington was organized as a response to Trump’s inauguration, Baton insists this was not the main theme of Pittsburgh’s chapter.

“If you looked at the signs, only a handful of them were anti-Trump,” Baton said. “Many of them were pro-choice, pro-black, pro-LGBTQ+ or simply pro-woman.”

In Pittsburgh’s 2018 march, the same progressive, anti-patriarchal chants enlivened the crowd and the same pink hats dotted the parade, but the central focus was different — it was a call to vote. Speckled in between the “resist” and pro-choice posters were signs endorsing political candidates and telling women to go to the polls in November.

According to Dena Stanley, the director of a trans advocacy group called Trans YOUniting and one of the speakers at the 2019 march, these are the kind of pointed political statements that will make a real difference in government.

“I will fight tooth and nail to tell politicians that if they don’t want us to be equals across the board, we will get someone in there who will,” Stanley said.

Stanley is one of six speakers who will headline the event. Among the others are Michelle Kenney, whose son, Antwon Rose Jr., was fatally shot by Pittsburgh police in June, state Rep. Summer Lee and Zohra Lasania, the program director of the Council on American-Islamic Relations-Pittsburgh.

“When I marched in Philly, there were rainbow and trans flags everywhere. There were women of color marching all around me,” Lombardi said. “I hope it’ll be the same in Pittsburgh.”

Baton said Pittsburgh’s organizing team made a concerted effort to include minority women in all stages of the march, from planners to actual speakers at the event. A majority of the organizers and speakers are women of color, which Stanley said she believes is a great educational opportunity for the audience.

“There are gonna be thousands of people there who have never seen a black trans woman speak in person,” Stanley said. “I want to educate them as much as possible so they can then go and educate those around them.”

Lombardi thinks the march will be an enlightening experience for young people in general, who she said should get more involved with political movements like the Women’s March.

“Young people usually talk about their issues on social media, with their friends or in clubs on campus that are working toward a better cause,” Lombardi said. “This march is a great way to take that youthful energy and mobilize young people to fight for the causes they believe in.”

While Lombardi thinks turnout in past years has been “awe-inspiring,” she wants even more people to get involved, a call echoed by Baton.

“Instead of sitting at home and wishing we’d done more, I want all women to put their hands and feet behind the issues they care about,” Baton said. “And what better way to stick up for women’s issues than to attend the Women’s March?”