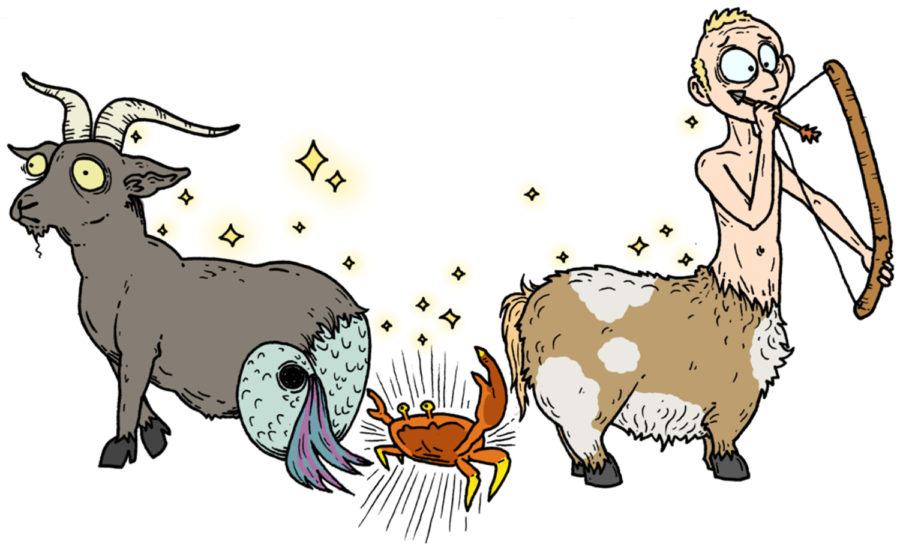 Aquarius (Jan. 20-Feb. 18): Do you use Apple Music? Do you enjoy it? Do you like to pop, and lock, and jam, and break?  Reconsider this stance, Aquarius. Apple Music is the streaming service of the new bourgeois. Instead, try waiting for that one self-driving Uber that has the guy who plays classical clarinet and his car radio at the same time. I’ve heard he’s really good.

Pisces (Feb. 19-Mar. 20): An inspirational quote probably from Alexander Hamilton to Thomas Jefferson, Aaron Burr and James Madison: “‘Federalist Paper No.1: General Introduction’ was supposed to just be my suck-it list, addressed to all of y’all, detailing exactly how, when and why you can eat my breeches, but George Washington told me not to. But if he hadn’t, let me just say, you’d all be feeling really stupid right now and you can take that to the bank. My bank. The one I made. You know, for the government.” Think about it, Pisces.

Aries (March 21-April 19): Do you ever think about Dennis Rodman, Aries? Consider this man. He played basketball, had to live with the nickname “The Worm,” competed on “Celebrity Apprentice” and now spends his time hanging out with Kim Jong-un and saying his own name the same way theatre kids say “Broadway.” How does a person of this combination of experiences exist in our world? How does a person with your combination of experiences exist, Aries? No matter how, be proud that you exist as you do. After all, you could exist as “The Worm.”

Gemini (May 21-June 20): Hello, Gemini. Friendly reminder that your television can hear you. Your phone can hear you. The sidewalk and the grass and the ghost of the Qdoba on Forbes Avenue can hear you. So can J.K. Rowling, and the minute you mentioned Ron Weasley in conversation, she decided that she always saw him as a Hufflepuff, despite writing him as a Gryffindor for seven books and eight movies. The stars can also hear you to and they think you should consider shutting up more.

Cancer (June 21-July 22): Confidence is important, you splendid, saucy crab. To unlock your most confident self, consider developing a personalized “power stance,” a move you can perform to feel centered. I suggest beginning by planting your feet flat on the ground and leaning back as far as possible, as though you’re playing a fun game of limbo. But this is not a fun game. Power stances are serious. Continue to lean back, arching your stomach, until your hands also reach the ground. You are now in the perfect position to crab-walk. Look behind you at the silly, insecure mortals walking about on two feet. Stare at them. You are the alpha now.

Virgo (Aug. 23-Sep. 22): Picture a lizard, Virgo. Place that lizard in a desert environment. Hold that image in your mind. Hold it in your heart. Now picture that lizard, but without little lizard legs or little lizard feet, which may or may not be webbed, depending on how you see your lizard. Imagine your lizard moving about its desert environment, possibly toward a food source or water. Possibly toward you. One may consider this limbless creature to now be a snake, but remember, though your lizard now has the skill and shape of a snake, it is not a snake to you so long as you remember it as a lizard, Virgo.

The Two Men Who Sit on the Benches on Oakland Avenue, Surrounded by at Least 18 Pigeons

The beasts eat the bread

Scorpio (Oct. 23-Nov. 21): Sometimes the sky shudders and moves. Sometimes heat looks like it’s waving, like a laminated piece of paper flapping about. Sometimes the sky is dark, starless, vast. That one’s normal, and probably caused by pollution. But the previous two observations are terrifying. They are a glitch in the system. Do not stare at them, Scorpio. I repeat, do not — oh, no, I’ve said too much. Run.

Sagittarius (Nov. 22-Dec. 21): A problem for the Sagittarius: Daniel is hosting a barbeque for all his friends from the lab. Because Daniel knows his friends are obsessed with watermelon and he refuses to make any other barbeque foods, he’s buying each friend two watermelons. If each watermelon costs $5.99 at Giant Eagle and it takes Daniel 25 minutes to drive to Giant Eagle and back, and gas is $2.39 per gallon, when is the best time to tell Daniel that his friends are the rats he works on, and that they don’t want watermelon. They want to not be injected with chemicals. They’re rats and you guys aren’t even friends, Daniel.

Capricorn (Dec. 22-Jan. 19): Think about your favorite punctuation mark, Capricorn. You got it? Good, keep thinking of it. Is it the period, the full stop, the line of demarcation between sentences? How about the question mark? You may be confused or just open ended, allowing answers to be presented to you for your approval. Whatever it is, consider instead embracing the exclamation point. Take it for a spin. Yell everything you write or say with excitement and emotion this week. If you don’t like it, at least you can sleep soundly knowing that no one else liked it either.