Syracuse uses strong second half to push past Pitt, 82-50 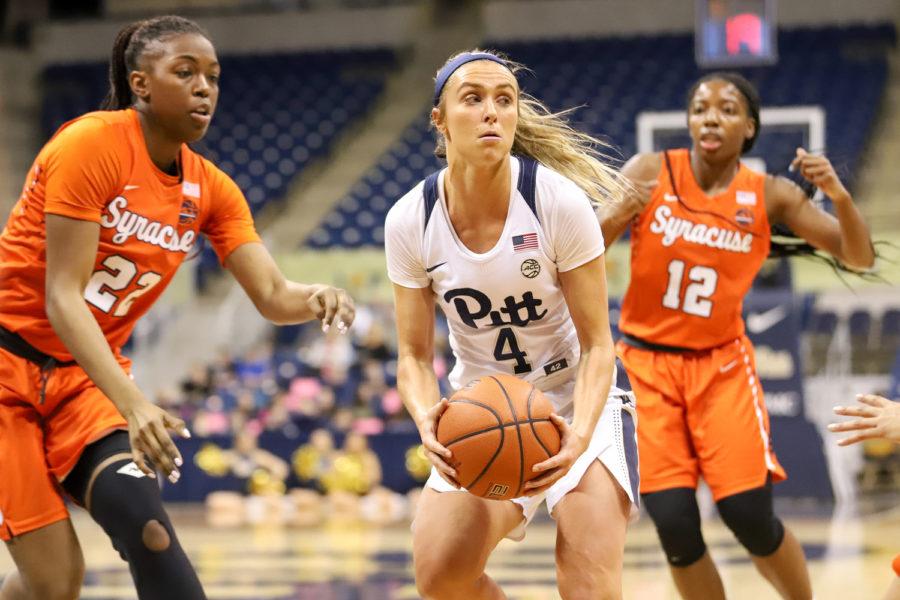 In a rivalry game that was competitive early on, the Pitt women’s basketball team saw a six-point halftime deficit grow to 32 by the end, falling to No. 12 Syracuse 82-50.

With the loss, Pitt dropped to 9-9 overall and 0-4 in the ACC this season. The team has now lost 10 straight ACC games dating back to last season, and this was the third ACC loss this year by more than 25 points.

“I think tonight we proved we could play a half with a really good basketball team, but we just can’t sustain for as long as we have to against really good opponents,” head coach Lance White said. “Second half, third quarter was just us falling apart and not being able to make the plays we gotta make … It’s another great team in the ACC that you gotta go and try to make plays, and luckily we get another chance Sunday to play someone else.”

The first quarter began with Syracuse taking control and looking to run away with it, as the Orange took a 14-7 lead with 4:19 remaining. Crucial early on were junior guard Gabrielle Cooper, who made a 3-pointer, and junior guard Tiana Mangakahia, who converted an and-one opportunity and made four assists.

But Pitt came roaring back with a 9-0 run to take a 16-14 lead. Junior guard Jasmine Whitney started the scoring with a jumper. Then after a steal from first-year guard Jahsyni Knight, senior forward Danielle Garven made a jumper as well. A couple minutes later, senior forward Kauai Bradley hit a 3-pointer to give the Panthers the lead with 2:39 left in the first quarter.

Pitt scored the first five points of the quarter to tie the game at 21 apiece, thanks to a made free throw by Knight, two free throws from Garven and a layup from senior guard Cassidy Walsh.

Then the Orange went on 10-3 run to take back the lead and the control of the game. Sophomore forward Digna Strautmane hit two timely 3-pointers to spur her team back ahead. All the Panthers could respond with was a free throw from Judkins and jumper by Whitney on the fast break.

Pitt edged out Syracuse with an 8-7 advantage to end the half. Walsh made all eight points for the Panthers with two 3-pointers and a jumper at the buzzer, while the Orange got another 3-pointer from Strautmane.

At the half, it appeared to be a fairly even battle — Pitt had similar numbers to Syracuse in shooting percentage (40-48), turnovers (8-7) and free throw percentage (50-50).

Syracuse also heavily outrebounded Pitt in the quarter, coming down with 17 boards compared to five for the Panthers.

Mangakahia, who finished the game with 14 points and eight assists, has established herself as one of the best guards in the country — her 8.0 assists per game are third nationally. Afterward, Walsh spoke about how the team did a good job on her in the first half, limiting her impact.

“She’s just someone that you have to keep in front of you,” Walsh said. “She’s a scorer, she’s a great distributor. I think we did a really good job on her in the first half … She’s a great player and she got a little more comfortable in the second half, but overall our guards did a good job on her.”

The fourth quarter was almost exactly like the third, with Pitt getting outscored and also shooting poorly. The Panthers shot 3-13, or 23.1 percent, in the quarter, while Syracuse shot 7-20 for 35 percent.

The Orange went on another big run to start the quarter, outscoring Pitt 16-6 until three minutes remained. Lewis lead the team with seven points in the quarter on 3-5 shooting and a made free throw, finishing the game with 11 points and six rebounds.

Walsh and Nelson both made 3-pointers, while first-year guard Ismini Prapa contributed a bucket, but Pitt had a difficult time against the suffocating press from Syracuse.
“It’s shooting open shots,” White said on the big difference in play between the two halves. “I think we turned down a lot … if [Walsh] and [Whitney] and Danielle get open shots, they have to shoot it. Our offense dictated our defense. We’re not good enough to be able to do that.”

The Panthers will continue the latter half of their four-game homestand against the Clemson Tigers Sunday at 2 p.m., where they will continue to look for their first ACC win.