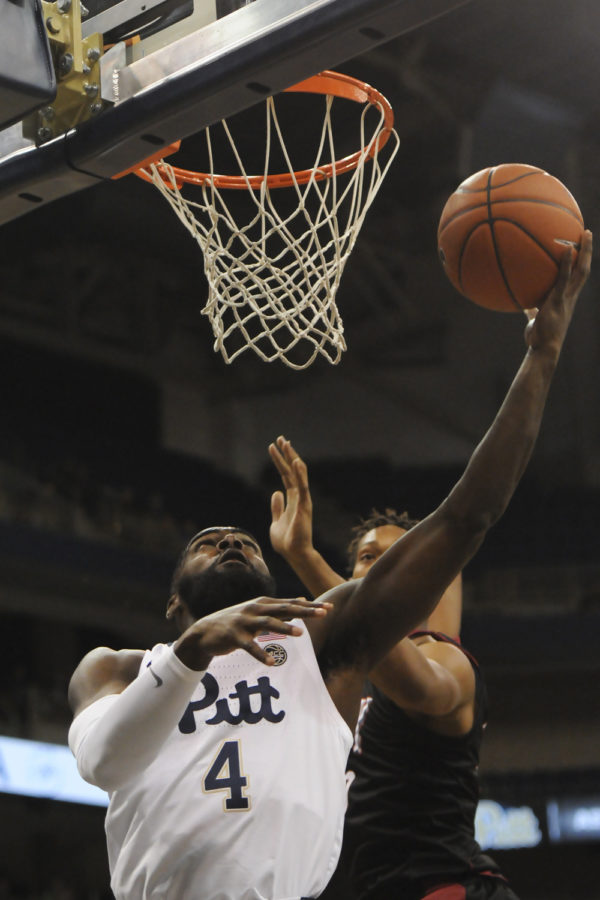 Senior guard and forward Jared Wilson-Frame, pictured here against Troy, led the Panthers with 19 points in a loss to Syracuse.

Pitt men’s basketball traveled to upstate New York Saturday afternoon for its 114th all-time meeting with traditional rival Syracuse. After being down by as many as 20 in the second half, the Panthers clawed back to make it a single digit game before ultimately falling 74-63.

Heading into Saturday’s contest at the Carrier Dome, one would be hard-pressed to find two teams playing with more confidence than Syracuse and Pitt. Fresh off of a road upset of No. 1 Duke, the Orange welcomed the Panthers, whose predicted long rebuild is progressing faster than expected following a win over No. 11 Florida State at home Monday night.

A physical, defensive battle between the two former Big East powers saw the Panthers turn in one of their worst offensive showings of the season. The Panthers scored only 63 points on 33 percent shooting from the field.

Syracuse opened the game with a 3-pointer from junior forward Elijah Hughes — the first of a dozen 3-pointers for the Orange on 26 attempts, good for 46 percent from distance.

On the ensuing Panthers’ possession, sophomore forward Terrell Brown would respond with his first 3-point basket of the year. Despite Brown’s early success, the 3-pointer would not yield much success for the Panthers as they misfired on nine of their first 12 attempts from beyond the arc.

Despite Pitt’s shooting deficiencies, the team was able to keep pace with the Orange largely due to the strength of their offensive rebounding. The Panthers were held off the offensive boards for more than 10 minutes to start the game, but finished by doubling up the Orange 18-9.

Senior guard Jared Wilson-Frame was relegated from a starting role following multiple poor shooting performances against NC State and Florida State. Coming off of the bench proved useful for Pitt’s most seasoned veteran as Wilson-Frame regained some of the effective shooting he showcased during the non-conference schedule.

Wilson-Frame subbed in with 13:53 left in the first half and immediately hit a 3-pointer. He finished with a team-leading 19 points to go with eight rebounds, and shot 39 percent from three point range.

Following Wilson-Frame’s loud entrance, Syracuse sophomore guard Oshae Brissett answered with a three of his own and added a driving layup to give Syracuse a 12-11 lead that they wouldn’t relinquish for the rest of the game.

With 10:06 left in the first half, first-year guard Trey McGowens was forced to return to the locker room after a collision with a Syracuse defender. McGowens would eventually return to the game with a bandage underneath his left eye.

The combination of poor shooting and turnovers from Pitt allowed Syracuse to open up a 12-point lead. The vaunted Syracuse 2-3 zone defense lived up to its reputation in the first half, as the young Panthers were unable to open up the middle of the defense to generate layups and free throws.

However, the Panthers eventually showed the type of resiliency that has come to be expected of them. First-year guard Xavier Johnson shot Pitt’s first free throws with 2:41 left in the half, which led to a 9-0 run of fast, up-and-down basketball that cut the Orange lead to three.

Syracuse junior guard Tyus Battle, who finished with 22 points, three rebounds and two blocks, opened the second half scoring with a 3-pointer to halt an 11-0 Pitt run that stretched back to the closing minutes of the first half.

Battle continued to affect the game from all angles for the Orange, passing and scoring to expand the Syracuse lead to 13 with 12:18 left in the game and force Pitt head coach Jeff Capel to call timeout.

A little more than two minutes later, Capel would call for a full-court press to try and generate a faster pace, but Syracuse was able to break the press with ease and find easy baskets. Capel was forced to expend another timeout with 9:45 left to play and the Orange leading by 15.

Following the timeout the Panthers began to show signs of life, rattling off five straight points thanks to baskets from McGowens and Johnson. The Panthers used their third timeout of the half to try and regroup before making another push.

But Pitt again failed to build off that momentum and found themselves in a 15 point hole thanks to some hot shooting from Syracuse first-year guard Buddy Boeheim, who finished with 13 points on 4-5 shooting from three.

The Panthers mounted one more run to cut the lead to nine with 3:21 left, but that’s as close as it would get. The Orange kept the Panthers at bay for the remainder to secure their fourth conference win in five games. Syracuse welcomes Miami to the Carrier Dome on Thursday in its next contest.

Other notable performers included Johnson, who finished with 17 points and seven rebounds for Pitt. For Syracuse, Brissett tallied 11 points to go along with five rebounds and four assists.

The Panthers fall to 12-6 overall and 2-3 in the ACC. They will return home to welcome the Duke Blue Devils and their trio of outstanding first-year players Monday night in Pittsburgh.