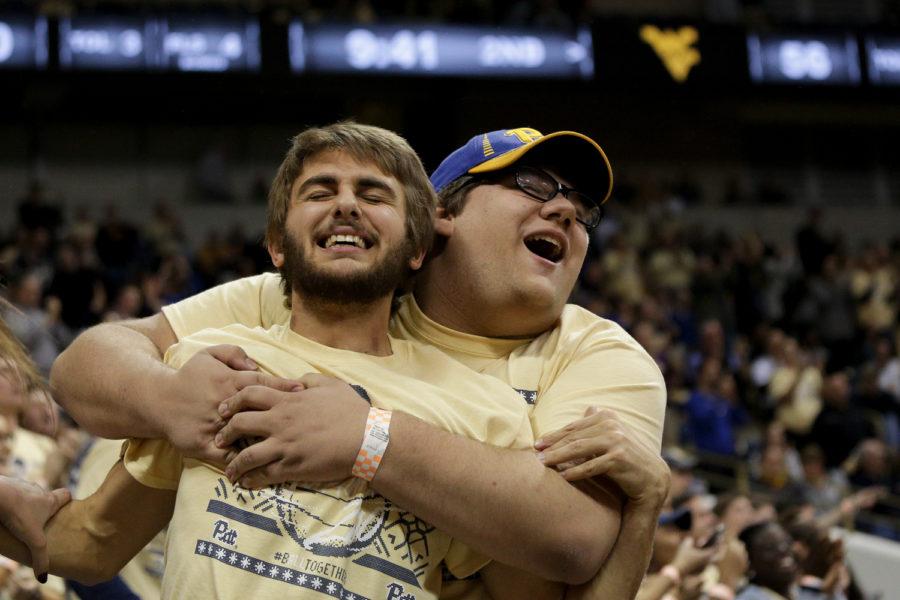 Fans celebrate in the student section during the 2017 Backyard Brawl.

As the clock expired at the Pitt men’s basketball game on Jan. 14, members of Pitt’s student cheering section, the Oakland Zoo, threw their hands in the air along with the rest of the crowd, screaming in celebration.

Yet despite seeing Pitt notch its first win over a ranked team in more than two years, every single fan stayed in his or her seat. Not one student ran onto the court to celebrate with the team.

“We honestly didn’t think about it until people started tweeting at us and they were like, ‘The announcers are saying the students should storm the court,’” Oakland Zoo President Derek Sellers said. “It’s not something that goes through our mind when we were about to win that game.”

Storming the court has become common in college athletics as a way for fans to celebrate their team’s big win, usually over a rival or a team ranked above them.

The first time the Oakland Zoo ever made a court appearance at a men’s basketball game was on Jan. 13, 2001, when the Panthers upset No. 15 Seton Hall.  To celebrate, Oakland Zoo founder Matt Cohn and eight of his friends rushed onto the paint at the Fitzgerald Field House.

“We beat them, so we stormed the court,” Cohn said. “It was the saddest court-storming of all time, like there were maybe 20 people and the players on the court.”

It was the first time the Oakland Zoo ever stormed the court, something that has only happened twice in the history of the Zoo. The second and last time was when Pitt upset Syracuse later that same year.

It’s been 18 years since Pitt’s students have stepped foot on the court after a basketball game — and it’s something that has never happened at the Petersen Events Center.

But it’s not because the athletic department doesn’t let them.

The reason the Oakland Zoo doesn’t storm the court is because the founders knew the basketball team was expected to and should win at home. Pitt was ranked in the top 10 for the first years of the Zoo with no upsets at home, giving the Zoo no reason to storm the court. While that is no longer the case, the tradition has still stuck.

In its first season at the Pete, the men’s basketball team went 15-2 at home and advanced to the Sweet 16 round of the NCAA Tournament.

The only time storming the court was talked about during Cohn’s time at Pitt was when he was a fifth-year senior, when Pitt was unranked and playing No. 1 UConn at home. If the Panthers won, Cohn said he would have stormed the court.

But Pitt lost and with it went the opportunity to storm the court at the Pete for the first time.

Not everyone agrees with the Zoo’s unwritten tradition. If former player Ashton Gibbs could change anything about his time at Pitt, it would be that. After he hit a game-winning 3-pointer, he was expecting to get swarmed, but it never happened.

“I definitely wish they were able to storm the court because it brings even more of a connection between the students and players,” Gibbs said. “I shot a buzzer-beater against Providence in the 2010 season that I wish could’ve been redone, mainly because the students didn’t storm the court. A buzzer-beater is one of the best feelings you can have as a player. Enjoying the feeling with the fans makes it even better.”

Managing editor for The Athletic and CBS broadcaster Seth Davis, however, appreciates the Zoo’s mindset. Davis has been outspoken against storming the court for three main reasons. The first reason is safety. There is a great possibility for people to get hurt when large numbers of fans rush onto a space. The second reason is fights, which have occurred between opposing teams and fans.

“The players and the referees, they’ve earned the right to be on the court,” Davis said. “That’s a sacred space … and I understand that fans are excited and they want to celebrate, but I think if you can’t have fun and can’t celebrate in the stands, then you probably shouldn’t be at the game in the first place.”

Davis also believes storming the court is the highest compliment you can give to the opposing team because it shows you didn’t expect your team to beat them. And while he sees no reason for fans to ever storm the court, if there was a fan base that should want to storm the court, it should be that of the team who hasn’t won a conference game in a while — say, 690 days.

“The fact that the Pitt Students have taken the stand, I’m extremely impressed by that. That’s very impressive to me, they’re my new favorite student section,” Davis said. “It’s very cool, like, ‘Yo, we expected to beat you. We lost 20 in a row and won 10 games last year, but we expected to beat you.’ I like it. I’m impressed, it gives me hope for the future of America.”

Current player sophomore Khameron Davis also respects the Zoo’s decision not to storm the court, since he knows regardless they still support the team.

“I personally love the Oakland Zoo,” Khameron Davis said. “They are already amazing, if they want to storm the court, they can storm the court. If they don’t, then it’s cool, I know they love us and we love them back and that’s all that really matters to me.”

The Oakland Zoo doesn’t have any plans to storm the court Tuesday, when Pitt plays against No. 2 Duke. But that could change if the Panthers upset the Blue Devils, as Vice President Hope Gast said it’s unlikely they can stop 1,000 excited student fans. But Sellers doesn’t expect any court-storming to happen.

“I wouldn’t plan on it,” Sellers said. “If people decide they want to, they can try, certainly, but we aren’t going to plan anything. We expect to win.”

If Pitt wins and the Oakland Zoo does storm the court for the first time at the Pete, they have Cohen’s blessing.

“If we beat Duke on Tuesday night, to announce we are back, then I absolutely would condone storming the court because that happens when it’s total euphoria,” Cohen said.