Weekend Recap: Swimming and Diving gets only team win of long week 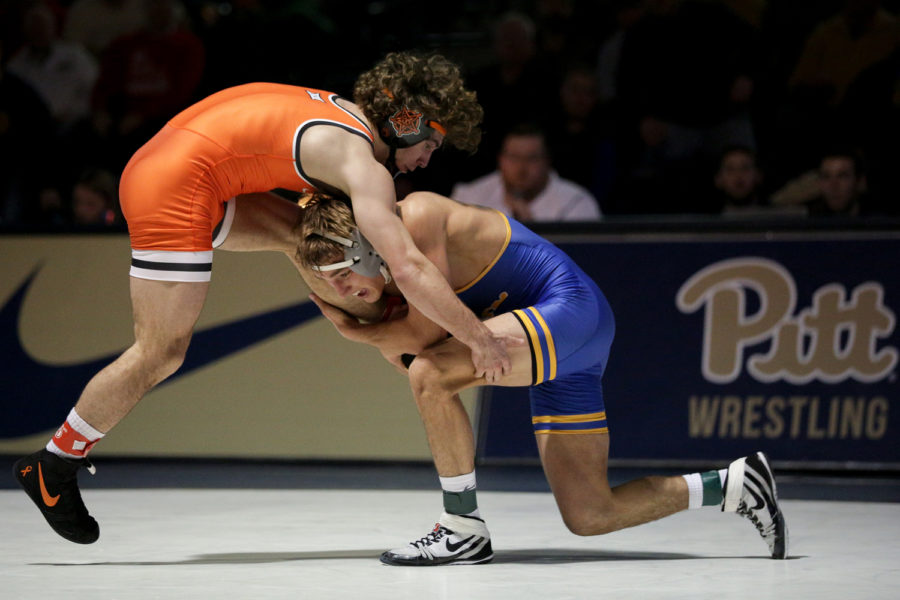 Pitt’s swimming and diving team picked up Pitt Athletics’ only win over the long, chilly weekend. The track and field and gymnastics teams both saw their members obtain individual successes, though, with each team seeing at least one athlete come in first place in an event.

The women’s basketball team lost its fifth-straight ACC game, and while the wrestling team is no longer undefeated, it had the moment of the week when Micky Phillippi upset the No. 2 ranked wrestler in his weight class.

Redshirt freshman Micky Phillippi was the lone bright spot of Pitt’s 36-9 loss to No. 3 Oklahoma State this weekend. Phillippi upset the No. 2 ranked 133-pound wrestler in the country, Daton Fix, leading to the latter’s first collegiate loss. Phillippi is now 6-1 against ranked opponents.

Pitt’s only other win came from redshirt sophomore Jake Wentzel in the 165-pound division, when Wentzel pinned Andrew Shomers in one minute and 48 seconds to get his win and Pitt’s second win of the day.

Oklahoma State took an early 5-0 lead before Phillippi upset Fix. After the upset, the Cowboys responded by extending their lead to 17-3. Wentzel’s pin ended Oklahoma State’s streak, but wasn’t enough to put Pitt ahead.

After dominating for much of this season, Thomas fell to No. 2 Derek White. Thomas fought and tied the match 8-8 with 10 seconds to go, but White had riding time recorded and came away with the victory.

The Panthers will be back on the mat when they open ACC Competition on Friday at No. 13 Virginia Tech.

The women’s basketball team allowed a 12-point second-half lead get away from it Sunday afternoon, ultimately losing to Clemson 65-59 at the Petersen Events Center, despite having three players score in double digits.

Pitt had a 33-28 lead going into half time, but was outscored 22-14 in the third quarter and 15-12 in the fourth quarter, relinquishing its lead.

Clemson dominated in the paint, scoring 30 points from inside while the Panthers only obtained 16. Clemson’s bench also helped the Tigers, coming up with 29 points compared to Pitt’s 6.

The Panthers finished the game with a 36.2 shooting percent and 34.6 percent from three. They were also 8-13 from the free-throw line. The Tigers shot 43.1 percent, 33.3 percent from the line and were 16-21 from the line.
Pitt will look to win its first ACC game on Thursday at home against Virginia.

Pitt swimming and diving picks up two wins against Denison

After a long bus ride to Granville, Ohio, both the men’s and women’s swimming and diving teams picked up wins against reigning Division III National Champions Denison on Friday.

The Panthers won 29 of 32 events during the meet. Four of those wins came from the divers and 25 came on the swimming side, with the men’s team winning every event it competed in.

Sophomore Blaise Vera set the record for the fastest 50-yard freestyle at the Trumbull Aquatics Center. He swam the event in 19.98 seconds, becoming the first swimmer to ever swim the 50 free in less than 20 seconds in the Aquatics Center’s seven-year history.

The swimming and diving team will be back at Trees Pool this weekend when Pitt hosts the Western PA Invitational.

Junior Dante Watson earned Pitt’s only individual victory at the Hokie Invitational this past weekend, finishing the 600-meter run with a time of one minute and 19.55 seconds.
Pitt’s only other victory of the weekend came from the women’s 4×400 meter relay. The team, made up of first-year Flora Ahiarakwe, sophomore Nikki Scherer, sophomore Breanna Phillips and first-year Sydni Townsend, finished with a season best time of 3:43.92.

Senior Miranda Salvo and junior Sarah Frick both earned second-place finishes in the 800-meter and 5,000-meter runs, respectively. In addition to Salvo and Frick, three other athletes on the women’s team finished in the top 10 of their respective events.

On the men’s team, five athletes earned top-five finishes in their events, including two third-place finishes from fifth-year Nate Sloan in the 800-meter run and first-year Tyler Rollins in the 5,000-meter run.

Sophomore Greg Lauray was the only field athlete to finish in the top five, coming in second place in the high jump.

The track and field team will travel to State College this weekend to compete in the Penn State National Open on Friday and Saturday.

Women’s tennis loses its first match of its final season

The women’s tennis team lost its first game of its final season this weekend. The Panthers traveled to State College, where they lost to Penn State 6-1.

The Nittany Lions won the first doubles match and then won three straight singles matches to clinch their victory.

Pitt won two games during the match, one in doubles and one in singles. Senior Natsumi Okamoto and senior Luisa Varon defeated Penn State’s Chelsea Sawyer and Frederikke Svarre 6-1 to earn the Panthers their only doubles win.

The Panthers’ second match of the weekend against Akron was cancelled due to bad weather.

Pitt will play its first home meet of the season on Friday against Youngstown.

Sophomore Haley Brechwald and junior Alecia Petrikis tied for first place on vault, finishing with a score of 9.800. The finishes were Pitt’s first individual titles of the season. Pitt finished with a team score of 48.775 on the event overall.

On bars, Pitt finished with a team score of 48.075. Junior Rachel Dugan and senior Lucy Brett finished in a five-way tie for third place with a score of 9.750, leading the Panthers. The score was a season-high for Pitt.

Four Pitt athletes earned career- or season-bests on the balance beam. Brett, first-year Kiley Robatin and senior Brittany West all finished with a score of 9.875 for the event. For Robatin and West, it was a career-high. As a team, Pitt had a score of 48.625.

Senior Charli Spivey led Pitt on the floor, coming in third place with a score of 9.825. Spivey’s score helped the Panthers finish with an overall score of 48.775.

The Panthers next meet will be at home when they host George Washington on Saturday at the Fitzgerald Field House.