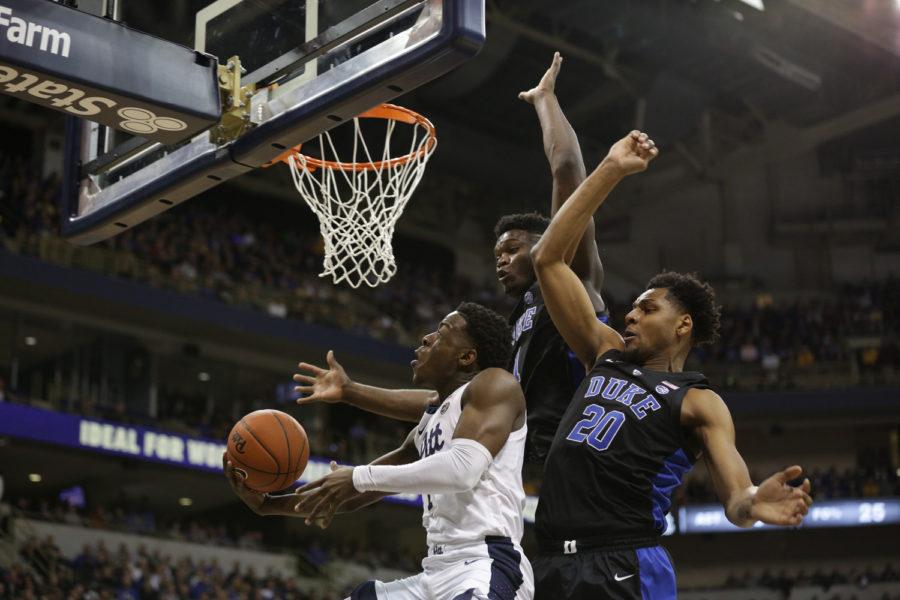 First-year guard Xavier Johnson (1), pictured here vs. Duke, was held to single-digit points for the second straight game against Louisville.

Three of Jeff Capel’s most well-known recruits from the past year were the leading scorers in Tuesday night’s matchup versus No. 2 Duke. Unfortunately for Pitt, two of those players were on the opposing team and scored a combined 51 of Duke’s 79 points in its 79-64 win at the Petersen Events Center.

It’s no secret that Capel, now in his first season as the head coach of Pitt men’s basketball, had prior ties to the opposing Blue Devils. He played under head coach Mike Krzyzewski from 1994-1997, then served as an assistant coach for the team from 2011-2018. There, he helped recruit two of the top players in this year’s class — first-year phenoms RJ Barrett and Zion Williamson — before taking the Pitt job. The duo came back to haunt Capel’s Panthers Tuesday night, scoring a game-high 26 and 25 points, respectively.

“They have two guys who are very very different, and that’s why I think it’s the premier program in the country,” Capel said. “Obviously they are well-coached, they play hard, they’re a really good team.”

For Pitt, one of Capel’s more recent recruits — first-year guard Trey McGowens — flashed his talent by scoring a team-leading 14 points. But fellow first-year standout guard Xavier Johnson was silent, as Duke’s lengthy zone defense held him to single-digit points (8) for the first time in his college career.

“They had those small lineups out there, they would have just picked us apart and got us into foul trouble,” Krzyzewski said. “So I thought the zone was good. The best thing for us was it kept McGowens and Johnson off the free throw line.”

That it did — for the first time all season, neither McGowens nor Johnson made a single free throw, going a combined 0-1.

The two teams actually battled like equals for the opening duration of the first half. Despite being undersized by Duke’s standards, sophomore center Terrell Brown showed his fearlessness on the boards by making a putback dunk over the 285-pound Williamson to make the score 7-4 Duke. Williamson returned the favor with a putback slam of his own, but the exchange sent an early message that Pitt came to play.

The Panthers would get down 11-6 but clawed back to draw even. First-year guard Trey McGowens showed his penchant for getting to the free throw line with an aggressive and-one layup, although he would miss the free throw. Shortly after, senior forward Jared Wilson-Frame stepped up to the 3-point line and nailed a jumper to tie the score at the 15:31 mark.

Two minutes later, Wilson-Frame hit another 3-pointer — this time on an impressive stepback that shook his defender and got the home crowd on its feet — to earn Pitt’s first lead of the game, 16-15. With 13:04 remaining in the first half, the matchup was looking less and less like David versus Goliath.

As if on cue, the Blue Devils snapped out of their funk and started to play like one of the best teams in the country. The duo of Williamson and Barrett — presumed to be the first and second picks in next year’s NBA draft — embarked on a two-man tear over the next five minutes, scoring 12 unanswered Duke points. By the time the dust cleared, the Blue Devils cracked open their first double-digit lead of the game, 27-16.

Wilson-Frame finally ended Pitt’s drought with a putback layup at the 7:54 mark. The basket seemed to give the Panthers some offensive momentum, as first-year guard Xavier Johnson scored eight points on four straight aggressive drives into the paint. But Pitt lacked a defensive answer for Duke’s superstar talent — especially Williamson, who made all nine of his first-half field goal attempts to lead both teams with 19 points at the break.

After drawing within 10 points to make it 34-24 at the 4:52 mark, the Panthers were again plagued by a stretch of poor play. They scored just one point for the remainder of the half while conceding 10 to the Blue Devils, including four to Williamson and three to Barrett. The 12,881 fans — which was seventh-most in venue history and included rapper Jay-Z — who flocked to the Pete looking for a win like Louisville were instead treated to a game similar to North Carolina, when the Panthers went on a lengthy scoring drought and trailed 45-23 by halftime.

“We stopped being sharp, we stopped playing as hard,” Wilson-Frame said. “Once they started making a couple plays it was like we took a punch and we didn’t want to punch back.”

It was more of the same in the second half, with Williamson stealing the ball from Pitt junior Malik Ellison and throwing down one of his patented, highlight-reel fast break dunks to put Duke up 50-27. Another dunk by Barrett made the score 54-33 with 15:19 remaining. At that point, Williamson and Barrett’s 38 combined points were more than Pitt’s team total.

The two teams traded baskets for the next five minutes with the scoring margin remaining roughly the same and the energy within the Pete slowly dwindling. Pitt showed some signs of life around the 10-minute mark, embarking on a 6-0 run that brought the Panthers within 16 points and caused Krzyzewski to burn a timeout.

In a last-ditch effort to limit Duke’s damage in the paint and trim the deficit to single digits, Pitt made the decision to switch to a 2-3 defense. It worked to an extent, but the Blue Devils simply found other ways to score. Barrett drained two 3-pointers, while Williamson knocked down two free throws and a fast-break layup to keep the Panthers at bay.

With 3:10 remaining, McGowens committed his fifth and final foul while trying to swipe the ball from Reddish. He exited the game as Pitt’s leading scorer with 14 points, while most fans began to exit the Pete en masse. Reddish’s ensuing free throws put Duke up 77-57.

The Panthers tacked on some bonus free throws in junk time, courtesy of Wilson-Frame and Terrell Brown, to make the final losing margin a more palatable 15 points, with Duke winning 79-64.

“I like that we kept fighting, but again it wasn’t enough today,” Capel said. “So hopefully we can learn some things from it and move on to the next.”

With the result, Duke moves to 16-2 overall and 5-1 in the ACC, while Pitt slides to 12-7 overall and 2-4 in the ACC. The Panthers will travel to Louisville Saturday to try and earn their second win over the Cardinals this season. Tip-off is scheduled for 2 p.m.