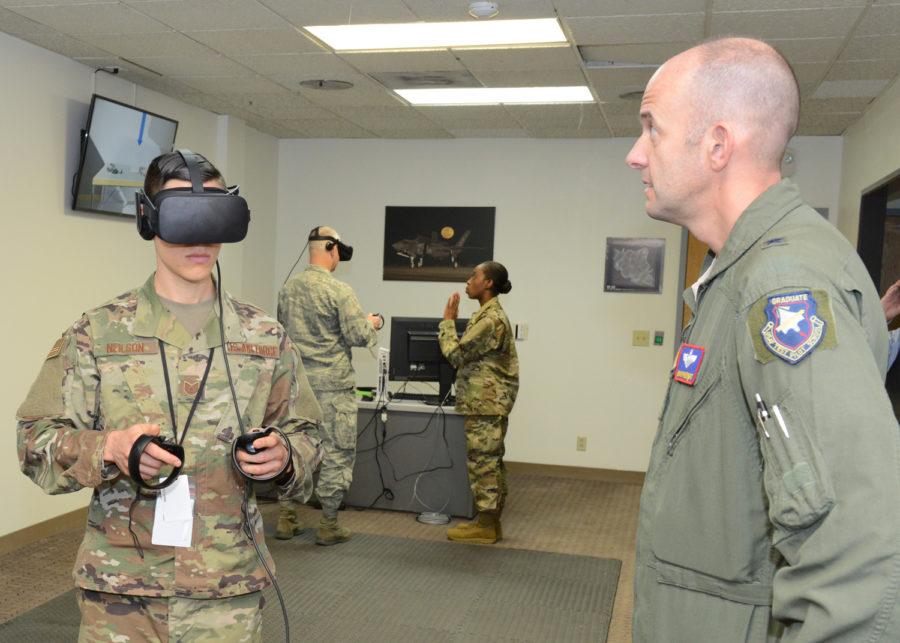 Virtual reality can be used to visualize mathematical and physical models that would otherwise be difficult to view in a classroom setting.

By Griffin Lynch, For The Pitt News

Virtual reality is a technology that allows a tech-savvy user to visit the Bahamas, watch a movie playing all around them or experience an event they never would have seen in real life. But it also has vast educational potential, which a group of students in Air Force ROTC Detachment 730 is exploring using a grant from the University’s Institute for Cyber Law, Policy, and Security, leveraging VR to allow students to visualize complex STEM concepts in real time.

The fairly new technology uses small, high-definition screens and lenses embedded in a headset that looks a bit like high-tech scuba goggles to create a 360-degree interactive experience. It does this by showing two separate videos, offset from each other to trick the user’s brain into thinking it’s really seeing what’s displayed on screen.

The earliest uses of VR technology were developed around video gaming, though the technology’s usefulness has begun to make itself clear in other disciplines as well, such as education and research.

The group of students, headed by Lt. Col. Diana Bishop, was awarded $5,000 through the Pitt Cyber Accelerator Grant, whose purpose is to “advance projects that establish and extend key intellectual infrastructures,” including AI, projects using blockchain technology and projects preventing the spread of online disinformation. The ROTC group’s funds have been used to buy three VR headsets, including two major competing brands, HTC Vive Pro and Samsung Mixed Reality, in addition to a computer powerful enough to support both of them.

The purpose of the innovation is to bolster the detachment’s mentorship program, where older ROTC cadets help their fellow students learn and grow. Using VR technology, the older students will be able to demonstrate concepts, like 3-D models, multivariable functions or vector field diagrams, that would be much more difficult to show and visualize on paper or on a computer screen. Graphs of multidimensional objects like these on a computer screen can only do so much to help visualize what’s really going on, so a demonstration of what these look like in a 3-D world can clarify their function in a tangible setting.

According to senior and project lead William Stephenson, this project is especially targeted toward STEM majors because classes in those fields tend to have ideas that are harder to visualize when one is starting out.

“The application itself is going to allow students to view an object, a mathematical model or physical model [in VR],” said Stephenson. “Especially in STEM majors, there’s a lot of tough classes when you’re young, especially coming in freshman and sophomore year … it would help educate the younger cadets with classes like Physics 2 and Calc 2, to a certain extent.”

The immediate purpose for the VR system is to use programs that can demonstrate math and physics concepts in real time, but senior Daniel Liszka hopes that future efforts by younger cadets will strengthen the program’s impact and effectiveness.

“[The system] could be used for more tutoring. In fact, that’d be awesome, I’d love for that to happen,” Liszka said.

A smaller group of computer engineering majors within the detachment will also continue to improve the system as part of their senior design project. Senior Kelby McWherter, along with Stephenson and Liszka, plans to design and build a handheld controller, compatible with each of the VR headsets, that will allow more refined interaction with the programs displaying the math and physics demonstrations.

The group is designing its own controller because the original controllers the headsets ship with were meant to be highly multipurpose. Working on a controller for only a few programs means they can customize every aspect, leaving out unnecessary features and building in special buttons and reactions that are specialized to their requirements. This will increase students’ ability to better interact with the simulations they’re seeing, giving them more immediate and tactile feedback.

“We’re actually going to be creating a tool to manipulate the object in space, something that’s more intuitive for slight manipulations and rotating what you have in your hand,” McWherter said.

A priority regarding the financial side of their endeavor was making sure the money they spent was used as effectively as possible. Although the headsets were a fixed cost, the group knew they could save money by buying the parts of the computer individually and putting it together themselves.

“You’re going to get a lot better deal on hardware building it yourself. With pre-built computers a lot of the time, you’re paying for the logo on it,” McWherter said.

Virtual reality can visualize mathematical and physics models in ways that might be impossible otherwise. This group of cadets wants to bring that powerful ability to aid future Air Force ROTC students. Lt. Col. Bishop said this project would not only be helpful to the students, but also could prove vital in developing the abilities of future Air Force recruits.

“The amount of folks we have studying STEM in colleges and then going out into the workforce is significantly low, and we see that reflected in the military as well,” Bishop said. “So in the Air Force, we appreciate the University of Pittsburgh working with us and investing in our cadets and what they can do.”