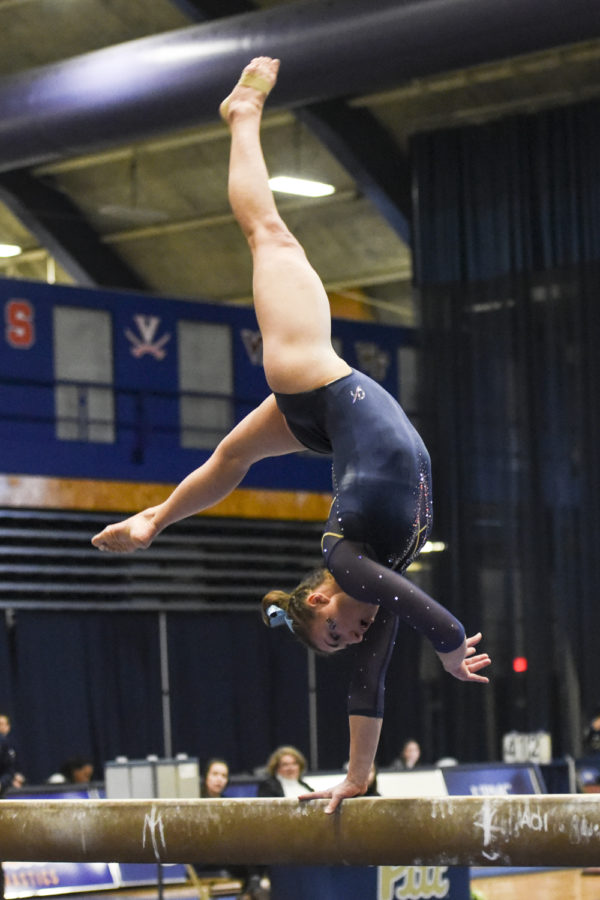 Pitt athletics had a weekend of ups and downs, with dramatic victories in tennis and gymnastics as well as gut-punching losses in wrestling and women’s basketball. In the pool, Pitt’s seniors dominated their last home meet, while the track team put several Panthers on the podium at Penn State.

The men’s and women’s swimming and diving teams had a successful Senior ight Saturday at Trees Pool, dominating the Western Pennsylvania Invitational by winning all 32 events and setting several school records in the process.

Sophomore Blaise Vera broke his own school record for the 50-yard freestyle twice, first in the individual race and then again as the first leg of the men’s 200m relay with a time of 19.55 seconds.

The aforementioned relay team, made up of Vera as well as sophomores Ellis Cannon, Armin Remenyi and Alec Hoch set another school record, finishing their relay in 1:19.52.

Junior Madelyn Shaffer set the lone school record of the day for the women’s team, finishing her 200m butterfly race in a blazing 1:58.14. First-year Dakota Elliott starred for the team as well, garnering three gold medals in the 100m and 200m breaststroke as well as the 200m IM race.

“With so many fans and alumni here today, it was great to see Blaise, Maddie and the men’s 200-free relay make Pitt swimming history,” head coach John Hargis said. “It’s also a tremendously exciting sign of what’s to come for our team at the ACC Championships next month. We have so much more to offer in so many events.”

The Panthers will travel to Ohio State for their next meet on Friday, Feb. 1.

Both the men’s and women’s teams had a strong showing at the Penn State National Open, with top finishes in several events. Friday saw Junior Aysha Muhammad win the women’s 60m hurdles, finishing in 8.53 seconds, while first-year Eddita Pessima completed the event in 8.55 seconds, good enough for the bronze medal and a podium finish.

On the second day of the meet, sophomore Greg Lauray won the high jump, making a 2.06m jump to secure the gold. Fifth-year Nate Sloan had another of the day’s highlights, cementing his legacy with the Panthers by placing seventh on the school’s all-time indoor leaderboard for the 800m run with a time of 1:51.02.

The women’s 4x400m relay tandem of sophomore Nikki Scherer, first-year Flora Ahiarakwe, junior Nina Crawford and first-year Sydni Townsend also continued its strong start to the season with another first-place finish, winning the event with a season-best time of 3:41.79.

The Panthers will travel to Michigan University next weekend for the Power Five Invitational, a prestigious meet that will put the team to a test.

Pitt’s No. 13 wrestling team began ACC play with a whimper over the weekend, traveling to Blacksburg to take on No. 12 Virginia Tech. The Panthers lost to the Hokies 7-26 in a lopsided decision.

No. 11 redshirt junior Taleb Rahmani was one of two Panthers to win their individual matchup, taking down his opponent 7-4 in the 157-pound bout. The other was No. 13 junior heavyweight Demetrius Thomas, a transfer student from Williams Baptist College, who won 11-7 for his team-leading 21st victory of the season.

Despite the lopsided finish, head coach Keith Gavin hinted that the match was closer than it seemed.

“We lost some close matches where we just didn’t bite down and make it happen,” he said.

The Panthers will face the unranked North Carolina Tar Heels at home on Feb. 2 in what should be an easier matchup following consecutive top-15 opponents.

The team is now 5-2 on the season, and next up is a tri-meet Feb. 1 against the Temple Owls and North Carolina Tar Heels at the Fitzgerald Field House.

The women’s tennis team — which the University announced will be discontinued after this season — split its two opening home matches at nearby Oxford Athletic Club over the weekend, defeating Youngstown State on Friday before falling to Notre Dame on Sunday.

The Panthers earned their first win of the season over Youngstown State, 5-2, behind a clutch performance from senior Gabriela Rezende, who won her doubles match with sophomore Claudia Bartolome 6-1 before clinching the match for the Panthers with her singles performance, storming back to take the second and third sets after being swept 6-0 in the first.

The match against Notre Dame wasn’t quite as close, as Pitt was beaten soundly, 6-1, in its first ACC match of the season. Bartolome recorded the lone victory for the Panthers in singles. Pitt’s next match will be at home against Delaware on Saturday, Feb. 2.