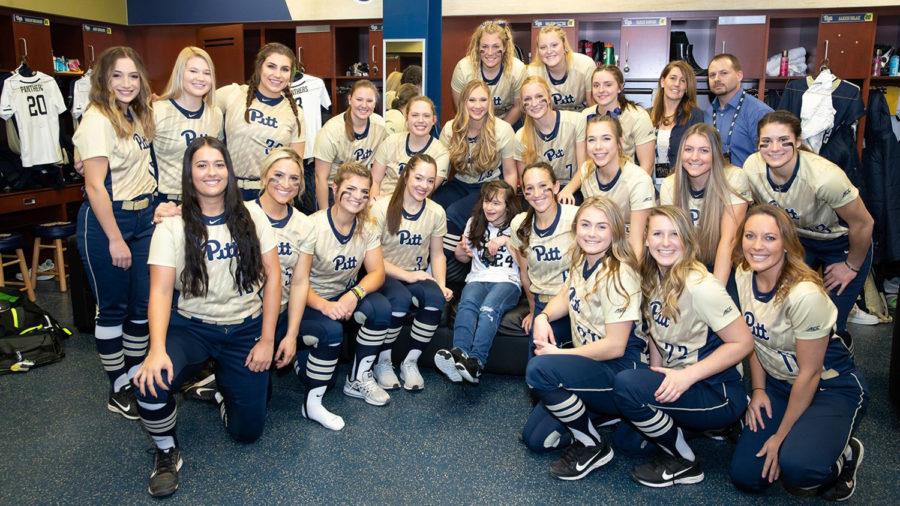 With the start of the season just a week away, Pitt softball head coach Jodi Hermanek added a home-run recruit — but not in the way you might expect.

As a child, DiTullio was diagnosed with cerebral palsy, a neurological disorder that affects movement, motor skills and muscle tone. Her relationship with Pitt is happening with the help of Team IMPACT, a national nonprofit organization that connects children with serious or chronic illnesses with college athletic teams, like the Panthers, in hopes to form lifelong bonds and life-changing outcomes.

“Blessings come in many ways and the trick to allowing blessings to be bestowed is to capture it and live through it. Rylee, we are grateful for the blessings of your impact that you’ve already had on these softball athletes and the coaching staff and will continue to have on the softball family,” Hermanek said. “Welcome to the sisterhood that bonds us forever and welcome to the Panther family.”

This is not the first time that Pitt Athletics and Team IMPACT have united. Pitt’s soccer team was paired with Mario Norro, a then 11-year-old from Gibsonia in 2015. Mario was diagnosed with acute lymphoblastic leukemia, the most common form of blood cancer found in children, in 2011, but was cancer free by 2014. Similar to DiTullio, Norro got to attend several team events, such as practices, games and dinners.

Joining DiTullio at the podium were Hermanek, senior infielder Olivia Gray and DiTullio’s parents, Lisa and Greg. Among the crowd to honor her accomplishment were family, friends, the softball team, the coaching staff and, of course, Roc the Panther.

“Today is about Rylee,” Hermanek said. “This amazing young teenager is being drafted into a championship program with these amazing young women. It’s a perfect match, if you ask me.”

Hermanek is entering her first season as Pitt’s softball head coach after previously coaching at the University of Ohio for 10 years, winning two MAC conference tournament championships. She voiced excitement for the opportunity to have DiTullio as part of the team.

“Rylee possesses many qualities that our coaching staff looks for when we recruit our athletes,” Hermanek said. “A big heart, an amazing family and willingness to be part of a culture that will mold you and impact your life forever, and nothing beats that glowing smile on her face.”

Gray, entering her senior season and recently voted to the preseason All-ACC team, talked about the team’s excitement upon finding out about the addition of DiTullio to the Panther family.

“I kind of kept it on the down-low a little bit because I didn’t want to get [my teammates] too excited about it in case it potentially didn’t work out,” Gray said. “But as soon as I told one person, it spread like wildfire.”

Prior to becoming a Panther, DiTullio played baseball for 10 years in The Miracle League, an organization whose mission statement is to provide opportunities for children with disabilities to play organized sports, regardless of their abilities. Upon being asked by one player what this day meant to her, she expressed elation for her new journey.

“I can’t explain how much this means to me,” DiTullio said. “I never thought I’d have this opportunity. I’m excited to be your teammate and I cannot wait to see the team dominate the ACC.”

DiTullio’s father, Greg, elaborated on what she can bring to the team.

“When you’re having a bad day and you walk in, or if you guys have a bad game, or a bad practice, and you walk in and she’s smiling, all of a sudden, you realize, it could be a lot worse,” Greg said. “For you guys to open up your hearts, she’s going to open up our hearts to yours and I cannot thank you enough.”

Following the press conference, DiTullio, the players and Roc the Panther had a dance party on the court at the Pete, which featured DJ Mikal Outcalt. One player asked DiTullio what her favorite Pitt slogan was, to which she answered:

The Panthers begin their season next Friday, Feb. 8, against Purdue in the College of Charleston Tournament in South Carolina.