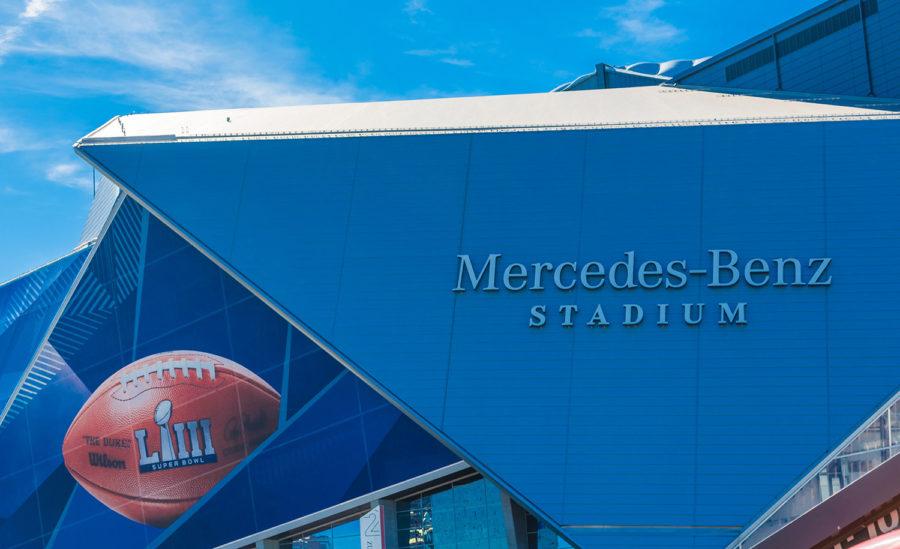 Super Bowl LIII will be played at Atlanta’s Mercedes-Benz Stadium on Sunday between the New England Patriots and the Los Angeles Rams.

In the lead-up to this year’s Super Bowl between the New England Patriots and St. Louis Rams, former Pitt News sports writer Randy Lieberman reached out to us to provide an up-close angle at the event. Lieberman, a 2010 graduate with degrees in English writing and communication, currently serves on the Atlanta Super Bowl LIII Host Committee.

During his time at The Pitt News, Lieberman was best known for contributing weekly columns, where he voiced forward-thinking opinions such as Pitt football making better use of its throwback uniforms and that the victory lights should turn on for the basketball team in addition to the football team.

In our conversation, Lieberman talked about his journey to Atlanta, what makes the city a perfect sports destination and how the host committee helped make up for the NFL’s snubbing of Atlanta’s rich music culture, among other things.

TPN: How did you come to get this position?

RL: It was timing and connections, to be kind of frank with you. My background is in college sports. After Pitt, I went to grad school at Georgia State University down in Atlanta, and I did a graduate assistantship where I basically worked as a full-time member of the communication department … So, got my Master’s at Georgia State, I loved Atlanta, so I got a job after that in the conference office. I started in the Sun Belt Conference, then worked to the Big Ten Conference.

Then, my wife and I decided to move back down to Atlanta, where she’s from, she’s got a job with the Atlanta Braves, and so we moved down here in June and this position opened up in the beginning of July. Someone I knew while working for the Sun Belt connected me with this position and said, ‘Hey, this is a really good opportunity for you and I think you’d be a good fit.’ So I applied and basically got the job and then here we are, a couple days before kickoff.

TPN: What are the responsibilities of the local host committee?

RL: In summary, we are the liaison between the city of Atlanta and the NFL. So we handle just a lot of things between us, that the NFL wants, that the city wants. We’re kind of that middle group that negotiates with the NFL and gets stuff done between the two entities, because in reality, the city is running the city and the NFL is running the NFL. So there has to be someone that kind of pushes the organization of an event of this caliber, so that’s why this host committee exists. So we take care of a lot of things that need to get done for the event itself, and we kind of oscillate between negotiating with both entities to make sure those things get done.

TPN: Will you be at the Super Bowl?

RL: Yeah, so fortunately, with our host committee roles, we were afforded a chance to have a ticket to the Super Bowl. So yes, we will be there … that’s kind of a dream come true, to be honest. I think when I first set out in sports PR I kind of set a goal that I want to work a Super Bowl. So this is kind of a nice life moment where I get to check off something. The only time I’ve ever experienced a Super Bowl is on TV. I’ve never actually been in a city where the Super Bowl was, either, so that’s two birds with one stone.

TPN: Do you have any rooting interest in this Super Bowl matchup?

RL: Yeah, I’m a Steelers fan … my dad is from Squirrel Hill, so we grew up Steelers fans … Honestly, I just do not like the Patriots, so that’s an easy choice for me to root against them.

TPN: What makes the city of Atlanta great for hosting a Super Bowl?

RL: I’m biased, but there’s no better place than Atlanta. I’m not trying to lay it on thick here, either. This place is just a sports hub. That’s why I wanted to live here and work here, because really it comes from like, every single perspective — the people, the location, the businesses, the government, we have so much going for us. We have a walkable downtown, we have a lot of public entities in place. We have the biggest and most efficient airport in the world, a lot of people can get here very easily. Atlanta’s located in the South, too, so the weather’s pretty nice year-round.

And on top of that, we have Mercedes-Benz Stadium, which is just a state-of-the-art facility. It’s really a marvel, like you go in and there’s this halo board in there, which has never been done before, you have the roof that can open for certain events, we really have the total package. And I think this Super Bowl is going to be a launching point because we had the College Football Playoffs Championship last year, Super Bowl this year, then next year we have the Final Four. So it’s kind of an unprecedented run we’re on right now. In 2026 we have one of the World Cup games coming here … we just have all these things in place to make us a destination.

TPN: Do you guys have anything at all to do with the [Maroon 5] halftime show?

RL: That’s one question we’ve gotten a lot, and the answer is we do not. The halftime show is solely chosen by the NFL. Obviously, our local market was not too pleased, which is to put it lightly, with who the halftime act was. So, in response to that, our event — called Super Bowl LIVE, which is a six-day festival leading up to the game — we have Jermaine Dupri, a local legend here in Atlanta and all over, to produce all the talent for Super Bowl LIVE. So we tied in our local market with Super Bowl LIVE to kind of, not compensate, but just to give that Atlanta feel to the Super Bowl that it was perceived to be lacking … So I think we’ve done a good job in representing Atlanta’s music scene, and I think Big Boi will also do that in the halftime show.

TPN: Last question — do you have any memories that stand out from your time at The Pitt News?

RL: There was a lot of micro-moments, I would say … there were a lot of, like, off-the-record conversations I’d have with [former Pitt basketball head coach] Jamie Dixon. He was just the nicest dude ever. And when he was let go, I felt that a little more, just because of how good of a guy he was. I thought someone like him was a once-in-a-lifetime type of guy to be the head coach at your school.

I will say, my experience at Pitt definitely helped pave the way down this path. I know Pitt’s not really known for its sports management or sports journalism program because it doesn’t have one, but it has all the pieces in place — a radio station, a TV station, Pitt News — where, if I’d have gone to a smaller school, I probably wouldn’t have had the type of resources or experiences that brought me to this position.