What are the odds: Super Bowl edition 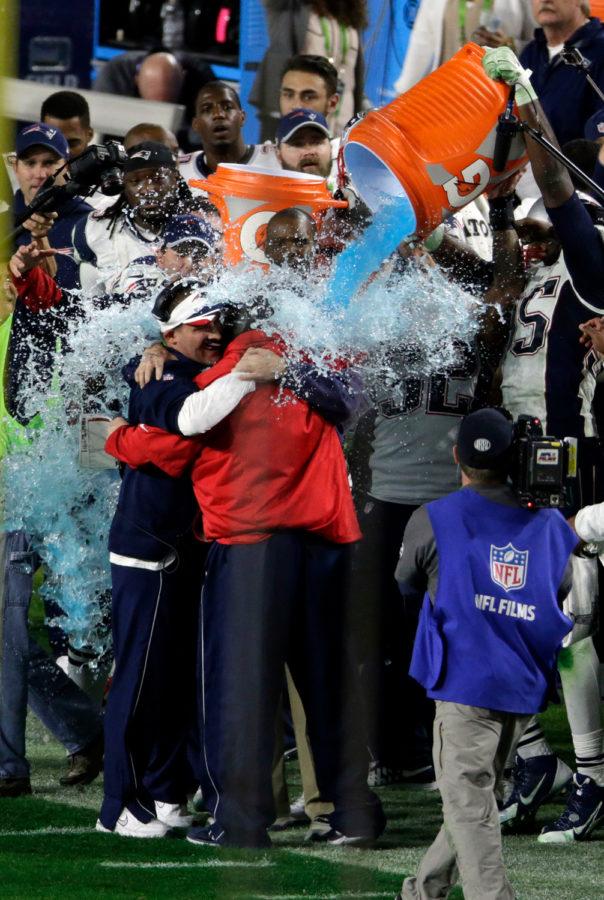 Patriots coach Bill Belichick is doused with Gatorade after winning Super Bowl XLIX on February 1, 2015, at the University of Phoenix Stadium in Glendale, Arizona.

There’s no better feeling than having a good weekend of betting — and that’s exactly what I got out of last week’s picks. After going 4-2 in my NBA bets last weekend, my season total now sits at 10-8. Despite some small struggles earlier this year, it feels like I’m back on a roll and ready for a big — no, scratch that — a Super weekend of betting.

Super Bowl Sunday, arguably the biggest gambling day of the year, is finally here. We are going to take a look at the game itself, featuring the veteran New England Patriots against the young Los Angeles Rams. But more importantly, we are going to look at all of the Super Bowl prop bets. Those consist of things like “How long will it take the National Anthem to be sung?” “Heads or tails on the opening coin flip?” and “What color Gatorade will be dumped on the winning coach?” There’s a prop bet for nearly everything you can think of during the Super Bowl. You can even bet on everybody’s favorite part of the day, the commercials.

Never bet before? Here are a few quick definitions. The spread is a figure that oddsmakers set that predicts by how much a team is expected to win or lose. The over/under is a prediction of the final combined score of both teams. The money line is the odds for a game based on $1.00. A “minus” (-) preceding the number indicates the option is a favorite. A “plus” (+) preceding the number indicates the option is an underdog.

Last year’s loss to the Philadelphia Eagles felt like it was the end of their dynasty. But in New England Patriots fashion, they are back in the Super Bowl once again. Tom Brady has been excellent this postseason, completing 71.1 percent of his passes, his best completion percentage in his playoff history.

The closest he’s gotten was during the undefeated season of 2007 when he completed 70.6 percent of his passes. It also helps that Brady’s weapons have played pretty well this postseason — especially running back Sony Michel, the non-Brady favorite for Super Bowl MVP. Michel ran for five touchdowns and 242 yards combined in the Patriots’ two playoff games. His big play ability is unmatched, and he could run all over the Rams defense. However, Aaron Donald will have something to say about that.

Donald, the Pitt alum and Rams star defensive tackle, could very well become the 11th defensive player to win Super Bowl MVP. The reigning Defensive Player of the Year had 20.5 sacks this season, and if he can get to Brady on Sunday the Rams will host the Lombardi Trophy. Sacking the Patriots quarterback has historically been the key to victory for opponents. The New York Giants made that clear in Super Bowl XLII, when they ended the Patriots’ undefeated season and sacked Tom Brady five times.

Luckily, the Rams don’t have to completely rely on their defense as the Giants did. Rams quarterback Jared Goff would love to join the two-name list of quarterbacks –– Nick Foles and Eli Manning (twice) –– to beat Tom Brady in the Super Bowl. Goff will also have the help of running back Todd Gurley on offense.

Gurley feels ready for a big performance, as the star back has struggled this postseason while sharing time with CJ Anderson in the backfield. Being a former Georgia Bulldog, I bet Gurley loves being close to home for the Super Bowl in Atlanta. Sometimes that’s all a guy needs to play well. The task of beating the Patriots in the Super Bowl is daunting, but the Rams will pull out all the tricks in their attempt to beat Goliath.

Bet: New England covers and bet the under.

Now for the best part of Super Bowl betting: prop bets. To those unsure what a prop bet is specifically, it’s the term used for a novelty or side bet. A simple prop bet example, and the one with your best odds, is the coin flip.

How long will it take Gladys Knight to sing the U.S. national anthem?

Bet: Knight will belt the Anthem, hit the over.

Will a fan run onto the field during the game?

Bet: Yes, of course — but only if you’re feeling really risky.

What song will  Maroon 5 perform first?

Analysis: There’s nothing more I’d love to see than Maroon 5 start the Super Bowl halftime show with a throwback classic song like “She Will Be Loved.” But they’ll likely play it safe and start with something more recent.

What will be the predominant color of Adam Levine’s top at the start of the Halftime Show?

Bet: Take a risk on Levine wearing literally any other color T-shirt.

Analysis: Brady is obviously the favorite, as quarterbacks have won the award the most all-time. If you think the Rams are going to win, then Gurley, Anderson or Donald are your best picks. I’d stay away from just about anyone else, except a super reach for Patriots tight end Rob Gronkowski at +3000.

Bet: Play it safe with Brady or take a shot with Donald.

What color liquid will be poured on the game-winning coach?

Analysis: When New England came back from down 25 points to beat the Atlanta Falcons in Super Bowl LI, there was no Gatorade dump on Patriots head coach Bill Belichick. Yes, the game did go into overtime so I understand hesitated celebration. But in his four other Super Bowl victories we have seen the hooded coach get drenched. If the Rams win this Sunday, I’d expect young head coach Sean McVay to fully embrace the shower.