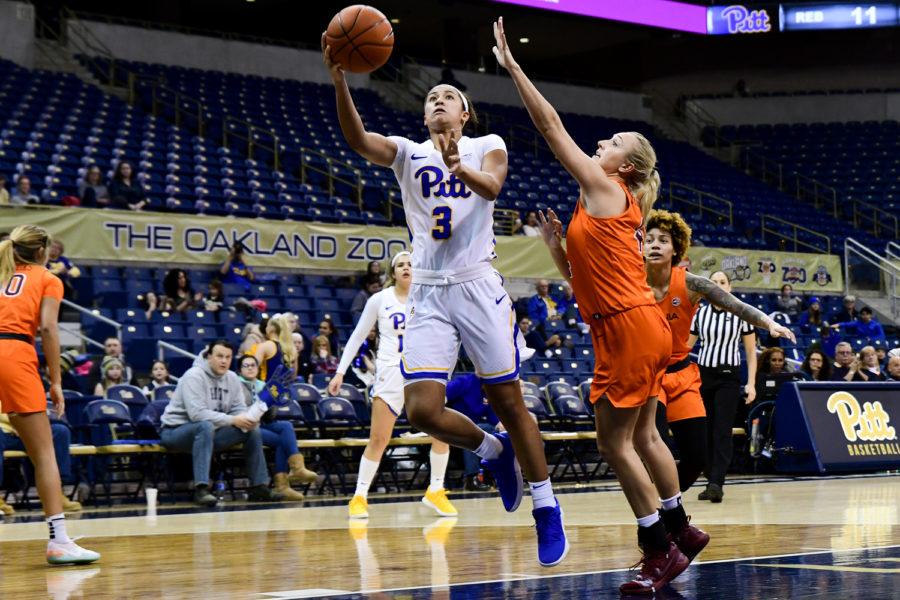 In a game between two ACC bottom dwellers each looking for their first conference win, the Pitt women’s basketball team saw its losing streak extend to eight games in a 74-58 loss to Virginia Tech at home Thursday night.

The loss drops Pitt (9-13, 0-8 ACC) into the bottom of the ACC and puts Virginia Tech (14-7 overall, 1-7 ACC) a spot above the Panthers in a tie with fellow one-win teams Wake Forest and Duke. In a game where both teams were desperate for a win, Pitt head coach Lance White expressed disappointment with his team’s play in the first half, but was satisfied with how they adjusted in the second.

“Well, a tale of two halves,” White said. “I thought our second half was the way you have to play. We talked to our kids a lot about hoping things will happen or making them happen and I thought the first half we did a lot of hoping. Hope that the shots would go in and not play defense or any of that stuff. And then the second half I thought we had a much better intensity and that’s how hard you have to play in the ACC.”

The game began evenly for both teams as the score stood at 6-6 with 5:46 left in the first quarter. Redshirt senior forward Regan Magarity got it started for the Hokies with a layup down low, and senior guard Taylor Emery had a layup. First-year guard Dara Mabrey also made two Hokie free throws. For the Panthers, sophomore Cara Judkins converted in the paint, junior guard Jasmine Whitney scored from mid-range off the fast break and sophomore guard Kyla Nelson drove in for a layup.

Virginia Tech quickly opened the game with a brilliant 3-point shooting display from Mabrey. The Hokies went on an 11-2 run as a team, starting with a layup from Magarity followed by three straight 3-pointers from Mabrey. Judkins was the only Pitt player to get a bucket during the run, and a 3-pointer from senior forward Kauai Bradley helped slow Virginia Tech’s first quarter momentum.

For the quarter, Mabrey shot 5-7 from the floor — including two free throws and 4-5 from the 3-point line — scoring 16 points and helping Virginia Tech earn a 22-13 lead. The Hokies were also more efficient on the boards, especially on offense, as they had 13 total and five offensive rebounds to Pitt’s six rebounds and one offensive.

The second quarter saw the Hokies completely outwork the Panthers offensively, stretching the lead to 48-29. Virginia Tech had two decisive 9-2 runs in the quarter, shooting 11-19 from the field and 4-9 from the 3-point line.

Emery took the reins after Mabrey’s hot first quarter and had a fantastic second quarter. She shot 4-8 from the field and 1-2 from 3-point range for 11 points, and contributed two rebounds, a block and a steal.

Pitt was once again out-hustled on the boards 13-5 by Virginia Tech, and Magarity was a huge part of it, building on her eight rebounds in the first quarter by adding six in the second.

“[Magarity’s] a great defensive rebounder and we’re not a great rebounding team,” White said. “So it’s a bad double-edged sword for us.”

With Pitt trailing 48-29, the game was essentially decided at halftime.

The third quarter was a bit more even as both teams shot poorly from the field, but the Hokies still outscored the Panthers, 16-14, and led 64-43 at the end.

Emery led again in the third quarter, scoring six points from a 3-pointer and three free throws, and Magarity was behind her with four points on a 3-pointer and a free throw. As a team, Virginia Tech shot 4-12 from the field.

Pitt shot better than Virginia Tech in the quarter, going 7-19 from the field but 0-4 from 3-point range. They were able to play well defensively, forcing nine turnovers and creating six steals. Whitney led the team with three steals and also had three assists with no turnovers. Afterward, Whitney — who finished with 13 points — said it felt good to contribute after being held scoreless in the previous two games.

“I would say it was my mindset,” Whitney said about Thursday’s performance compared to her previous two. “Coach kinda talked to me about having an attack mentality. If I can’t get the shot, get my other teammates open and just make stuff happen, make plays.”

Pitt finally outscored Virginia Tech in the fourth quarter, 15-10, but it was far too late for a comeback as the final deficit was a comfortable 16 points, 74-58, in favor of the Hokies.

Five different players scored for the Panthers in the quarter, with Garven scoring four points to finish as Pitt’s leading scorer for the game at 16 points.

Pitt’s next opportunity to win its first ACC game comes at Durham, North Carolina, where the Panthers will take on the Duke Blue Devils at 2 p.m. Sunday.