Blog: Shanghai from sunrise to sunset 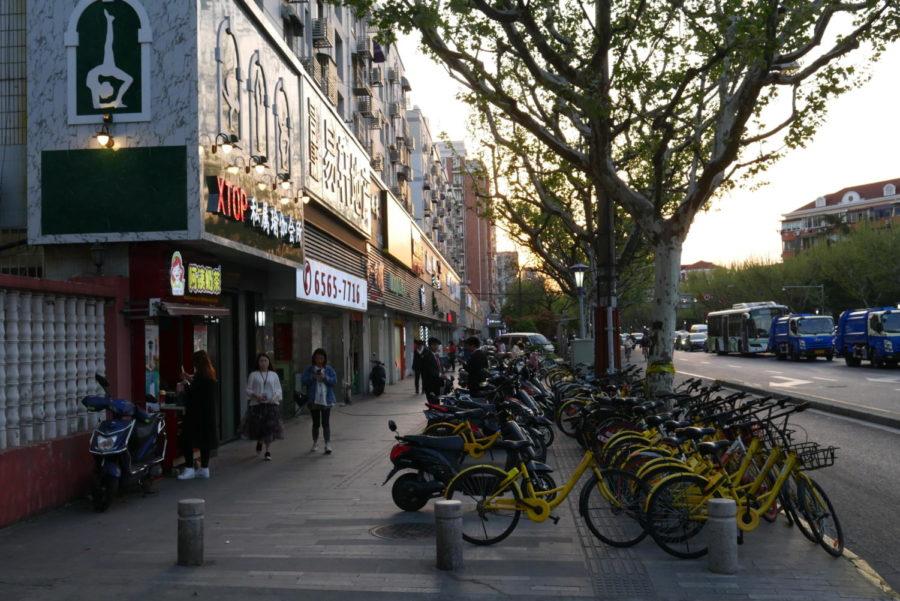 Scooters and ofo bikes line the streets outside of East China Normal University's campus in Shanghai.

Shanghai gave me a new appreciation for chaos. Between the insane driving, commerce and sheer number of inhabitants — 24 million or so — it seemed as if there was no way I could ever make sense of it all.

But the more my focus narrowed, whether on an individual life, a single small shop or even one of the many communities and networks in Shanghai, the more I began to notice steadiness over chaos.

Whether my observations were rooted in the contrast between Chinese and American life, or in seeing China as a total newcomer, I am not sure. But I felt that the steadiness of ordinary life allowed order to survive amidst the chaos of one of the fastest-changing places on Earth.

Most mornings in Shanghai I awoke to hot sunlight seeping through my curtains. I’d sleepily make my way to breakfast in the three-story cafeteria opposite my dorm, hungry and tired from a late night of memorizing Chinese characters. I’d usually follow the locals and grab a couple warm, soft baozi — staple wheat buns filled with vegetables or pork. Other delicious options included fried sweet bread, rice porridge with pickled vegetables, spiced eggs and warm soy milk.

I’d grab a bright yellow Ofo bike — one of the many bike share companies that flooded the streets of Shanghai — scan the QR code on the back and make my way to class. These bikes were so ubiquitous that they were essentially disposable. Some days I would snag a great one while other days they were bent or didn’t have a chain. It was a sort of Chinese roulette that would make or break the start of my day.

I’d teeter on the bike on my way to class, one hand holding a cup of soy milk, the other on the handlebars. Each day, the street was like a reliable little symphony of movement. Many Shanghainese warmed their bodies as the city warmed with the sun. Old folks in the volleyball courts outside my dorm moved gracefully to serene music in silk tai chi outfits. An elderly gentleman wore a 4-foot circle into the running track as he performed a gentle, endless routine of steady steps and fluid hand motions. Other early birds simply stretched or jogged around the track.

Electric scooters whizzed by, carrying deliveries or passengers. If Shanghai’s streets were rivers, scooters were the fish. I’d follow a little canal, watching landscapers carefully planting lotuses into the dark water, adding to the lush foliage that covered campus. Friendly stray dogs and cats roamed freely, often trying to sneak their way into the dorms and dining hall.

After arriving at the classroom, I’d squeeze in a few more minutes of studying for the vocabulary quiz that kicked off four hours of Chinese class.

A studious atmosphere prevailed on campus at all times, but there was also a comfortable sense of leisure and relaxation. My Chinese friends explained that college was the first time many of them were able to explore their extracurricular interests because of the amount of studying in high school. It seemed so many students exercised or walked around outside in the sun during the day.

The guys my age loved both watching and playing basketball. In the afternoons, my squad of study abroad friends would take on the teams of Chinese guys at the court. We often lost. Many of the local guys played for hours each day. It was a way of life. Their style of play was different than what I’m used to, much more focused on techniques like passing and shooting instead of physicality and driving to the net.

Evenings were filled with studying. In the months there I filled a notebook copying intricate characters over and over again. I knew no Chinese when I arrived in Shanghai, but seeing my more experienced classmates connect with the locals on the streets lit a spark in me. So I switched into an intensive language program. I could immediately reap the fruits of the extra hours spent learning on campus and on the streets as I navigated around the city. There’s no better way to learn a language than to live it.

For dinner we’d often visit our favorite dumpling — jiaozi in Chinese — place outside the campus gates. The owner, an older plump lady we called “nainai” — grandma — would greet us with a soft, holey smile and serve us up a plate of her ridiculously cheap dumplings. We’d play with her kitten that roamed the tiny, family-owned business, like most small shops around China. The leek and egg dumplings were my favorite, both salty and savory, each individually formed by nainai’s experienced hands. I’d dip them in a mixture of vinegar and spicy pepper, the most common condiments found on tables of Chinese restaurants.

Some nights, an hour or two before midnight, I caught a bit of wanderlust, hopped on a bike and made my way through the quieter areas to the north of campus. These were some of the pockets of Shanghai that were still relatively untouched by international development that defines much of the city center. Shanghai was a culture shock for me, but many Chinese say the city is too international, too much of a global hub to be representative of the rest of China.

Shanghai at night was filled with a brilliant neon glow. Restaurants stayed open late. Wandering couples, friends and family took in the smells and sounds of the night air. Groups of ladies gathered to play music on loudspeakers and dance on the sidewalks. Almost every street had a fruit shop that stayed open late, offering anything from tangy red lychee fruit to bananas to durian — a pungent tropical fruit that smells a bit like feet.

Weekend nights were for exploring the nightlife at different bars and clubs, often into the early hours of the morning. Most clubs followed a formula: a tiny dance floor, an abundance of extravagant tables, generic EDM pounding from the speakers and a lot of flashing lights. Some of them had dance floors that bounced like massive solid trampolines. It was clear many existed for the sole purpose of providing a place where the young and wealthy of Shanghai could display their new affluence in the grandest ways possible. Much of the money that flowed through the city was new money, brought about by China’s transformation in the past couple of decades.

There were also a number of less-known spots with great dance music and eclectic crowds. These places felt special, like threatened oases against the force of glamorous capitalism. Shanghai is so massive, stylish and international that you can truly find anything there — regardless of your style.

My Chinese friends found the idea of American-style bars — a place people gather to drink and talk — quite strange. I had no luck trying to explain a college house party to them either. Many Chinese people love to drink, but usually with friends and family over a big family-style meal.

Though many young people find it pretty repulsive, the most popular drink in China — which is also the most consumed spirit in the world — is a cheap, pungent, licorice scented liquor called baijiu. Many choose to drink the same things as Americans — Budweiser, Jack Daniel’s and tequila. Beer is generally light and served in double-sized bottles.

Some of my favorite memories involved taking a DiDi — the Chinese version of Uber — back to campus well past midnight on the massive overpasses that circled the city.

I always looked out the car window at the cool glow of endless apartment complexes and streets. I couldn’t have counted every window if I’d had a lifetime.