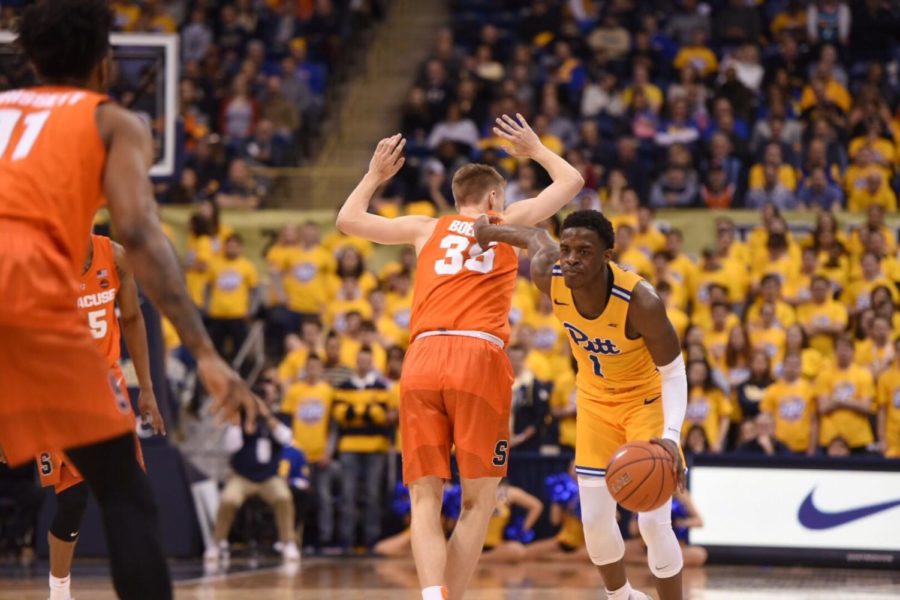 Pitt men’s basketball, dressed in their new yellow throwback uniforms for the first time ever, faced Syracuse in the 115th all-time meeting between the two programs. But the Panthers looked just as hapless against the vaunted 2-3 zone defense as they did in the 114th meeting a few weeks ago, falling 65-56 to the Orange and extending their losing streak to five games.

Pitt and Syracuse typically revive the hard-nosed spirit of their Big East pasts whenever they meet up, and Saturday was no exception. The game remained scoreless for almost two minutes before a layup from junior forward Malik Ellison unleashed confetti from the Oakland Zoo.

Not long after senior center Paschal Chukwu scored on an open layup to tie the game at two, first-year guard Xavier Johnson threw the first of three loud alley oops to sophomore center Terrell Brown and the Panthers led for a second time.

After a slow start that saw both teams shoot a combined 4-13 from the floor in the opening minutes, the Orange began to settle into their offense and sophomore forward Oshae Brissett powered a 7-1 run that gave the Orange a six-point lead.

Senior guard Jared Wilson-Frame nailed the first of four 3-pointers he would make on the evening to pull the Panthers within one possession with 11:30 left to play in the first half. After another easy layup from Chukwu inside, Wilson-Frame knocked down his second 3-pointer to cut the Orange lead to only two.

But that’s as close as the Panthers would get for the rest of the half. Syracuse outscored Pitt 22-11 over the next 10:37 to take a 35-22 lead into the locker room at halftime.

With their leading scorer, junior guard Tyus Battle, held scoreless in the half, the Orange needed strong contributions from their bench, and they got just that. Syracuse outscored Pitt’s reserves 11 to nothing in the first half. And as a team, they shot a blistering 50 percent from three, something that Coach Boeheim didn’t expect to see.

“I wouldn’t think we’d survive a a game where Tyus has four points late in the game.” Boeheim said. “He’s been so consistent for us all year long. He just couldn’t get the ball in the basket… They are a very difficult team to play here.”

At halftime, the hometown fans were given a reason to cheer despite their team’s struggles. The Pitt football team, with their 2018 ACC Coastal Division Championship in tow, was honored at center court. Then, a group of distinguished Pitt alumni made their return to campus, including legendary basketball players Charles Smith and Jerome Lane.

The Panthers came out of the locker room with renewed intensity, particularly on the defensive end. Pitt began the second half in a full court press, which immediately paid dividends. The Orange missed three of their first four shots and opened the door for a Pitt comeback.

About two minutes into the second half, the Panthers went on a 13-2 run fueled by the defense of first-year guard Trey McGowens and the offensive connection of Johnson and Brown, who capitalized the burst with a beautiful back door alley-oop that forced Syracuse head coach Jim Boeheim to call a timeout and brought the Panther fans to their feet.

The Orange went a full six minutes without scoring, and if not for the flurry of turnovers and missed layups from Pitt, might have found themselves trailing. But there was no such luck for the Panthers. After Brown collected an offensive rebound and put-back layup to cut the lead to 3 with 13:09 left to play, the Orange rallied to shut the door.

Brissett stopped the bleeding with a pair of made free throws. Then Battle found the bottom of the net for the first time on a short jumper, followed by senior guard Frank Howard hitting 3-pointers on back-to-back possessions. The Panthers were unable to answer.

A 2-point jumper from Elijah Hughes with 8:02 left to play extended the Orange lead to 14 and essentially put the game away. The Panthers seemed to deflate when on the very next possession for, McGowens was called for an offensive foul while shooting a 3-pointer. Postgame, head coach Jeff Capel aired some frustrations with that call and officiating in general during ACC play.

“Don’t understand it. Didn’t understand it — still don’t. Not sure I’ve seen that called in college, ever.” Capel said. “One of the interesting stats to me is that out first four games in conference Xavier [Johnson] took 33 free throws, Trey [McGowens] took 49. In the four games prior to today, Xavier has taken 14 and Trey has taken 4. The last four teams prior to today… they’re good, but man I don’t think they’ve mastered defense. That’s just an interesting thing to me.”

Capel added that he has reached out to the conference offices and gotten no response.

The Panthers responded briefly with a made jumper of their own, but on the ensuing Orange possession, Boeheim called for his squad to slow the tempo and eat clock. The final nail in the coffin came with 2:43 left to play and the Orange leading 59-52.

Syracuse ran the shot clock down to single digits before Hughes hoisted a long 3-pointer, which he missed but was able to gather the offensive rebound. He missed again from distance, and this time sophomore forward Marek Dolezaj collected another offensive rebound. The Orange did not score, but the possession took 1:12 off of an already dwindling game clock.

The Panthers were unable to come up with the big shots or rebounds down the stretch in the second half and despite an impressive turnaround defensively — Pitt held Syracuse to 32 percent from the floor in the second half — could not get the job done on offense.

Capel attributed some of that sluggishness to the so-called “freshman wall” that his young stars appear to be going through.

The Orange improved to 16-6 and earned their seventh ACC win of the season. On the other side, the young Panthers fall to 12-10, 2-7 in the ACC and get their next opportunity to break through the “wall” on Tuesday when they visit Wake Forest. Tip off is slated for 7 p.m.