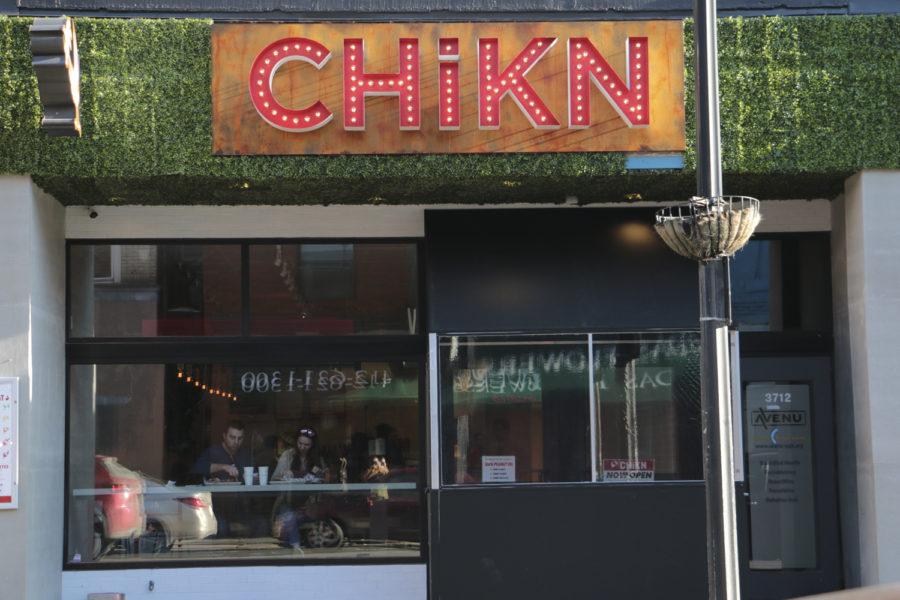 There is now a third location in Oakland that sells chicken and spells it wrong — CHiKN.

CHiKN opened its doors Jan. 18 on Forbes Avenue. The owners of Stack’d designed their fast, casual, no-cash location for Nashville-style hot chicken — spicy and fried — which they said Pittsburgh has not seen before.

Mike Garner, one of Stack’d’s five partners, said they have been planning the restaurant for eight months, after being inspired by the source of the trend, in Nashville.

“We fell in love with the Nashville hot chicken when we went down there for a bachelor party, like Hattie B’s, Prince’s, the original places. It’s blown up out west where one of the partners, Sean, lives, in LA. There’s a couple different restaurants doing it out there. There’s nothing like it in Pittsburgh,” Garner said.

The menu offers four variations of chicken — sandwich, tenders, salad and “CHiKN & Waffles.” Customers can customize the heat of the chicken based on their spice preference, ranging from “Southern” to “Damn Hot.” Garner said himself that the latter is too spicy for him.

“Our medium is most people’s hot. Then our hot is really hot and the ‘Damn Hot’ is only for the very few spicy people that really like it,” Garner said. “The feedback is good, it’s a different type of food, so no one’s really seen it before up here.”

Nashville-style hot chicken has been around for more than 70 years, when Prince’s first started selling its original dish. It has recently spread across the country at trendy locations, including cities like Los Angeles and Chicago.

Garner said their chicken breading recipe is a secret, since that’s where most of the chicken’s flavor comes from, but said it has nine different seasonings in it. (Prince’s has only ever confirmed that their chicken contains cayenne pepper.) Finding the exact method of chicken preparation took months of practice, he said, and the restaurant’s use of fresh ingredients helps balance the menu.

Garner said Oakland was a great place to bring Stack’d’s take on the hot chicken trend. The hospital and office buildings nearby offer a lot of foot traffic, and Garner said he and his partners decided to open in Oakland when a location on Forbes opened up.

Aaron Sett, a senior economics major, was excited to finally have a chance to come to CHiKN for the first time since the restaurant opened more than two weeks ago. Sett said he’s enjoying the transition from one restaurant to the next, although he misses the building’s previous tenant — Qdoba.

“It’s something new. I was a big fan of the Qdoba when it was here — I was hoping for something to replace that,” Sett said. “It took us almost a week to get here because it’s been so packed. Super spicy, but it’s really good food.

Compared to Stack’d a few doors down, CHiKN aims to provide fast dining rather than a sit-down environment. Store manager Zechariah Vanzo enjoys having the buildings so close to each other.

“It’s pretty nice [being close to Stack’d] in a way, for now we kind of steal our own business away. But we just figure eventually it will even out once the craze is over, with a new place starting here. We hope that we can just cover the to-go here and the sit-down over there,” Venzo said.

Garner emphasized that it wasn’t an issue of competition between CHiKN and Stack’d, because the stores sell two different things.

Since the fast and casual eatery opened two weeks ago, Venzo said he thinks the business is doing well as of yet.

“So far, it’s been very successful, we thought at first maybe the no cash thing would turn people away, but it hasn’t so far. We’ve gotten a lot of regular customers coming through, every day it just kinda keeps growing,” Venzo said.

According to both Venzo and Garner, the next item on CHiKN’s agenda is to start selling breakfast foods. Garner said the menu will be ready for orders in about two weeks, featuring options such as egg sandwiches and avocado toast.

Garner said CHiKN plans on being a quick breakfast option for Oakland.

“Chickens have eggs, so we have egg sandwiches,” Garner said. “There’s Pamela’s, but that’s sit down, McDonald’s is McDonald’s. This is gonna be a great chicken sandwich, or egg sandwich and stuff.”

Both the original and breakfast menus only have four options — which Garner said is key to a good product.

“We wanted to keep it simple, keep it small, just do one thing really well, so people were talking about us and trying to have the best fried chicken in Pittsburgh,” Garner said. “That’s the goal.”