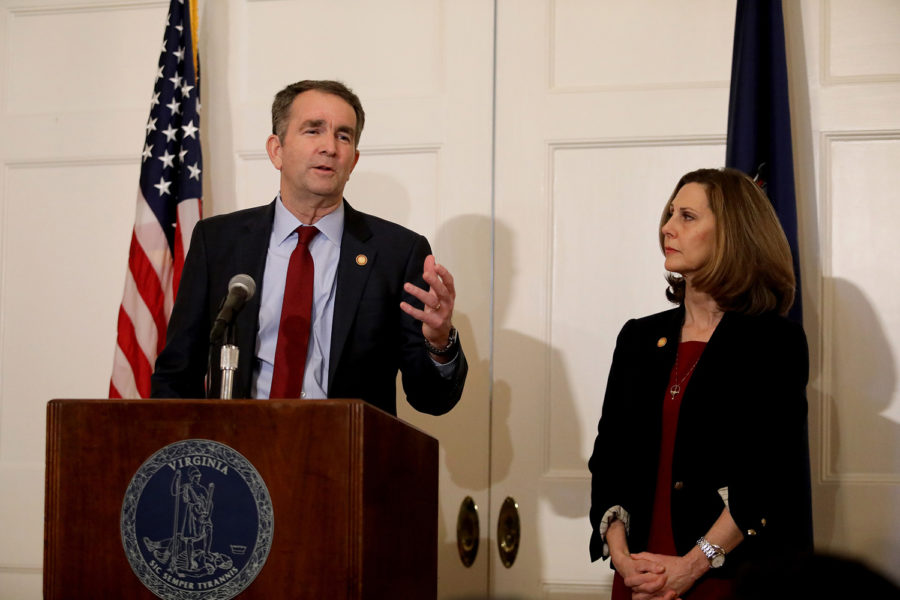 Virginia Gov. Ralph Northam, with his wife Pam at his side, said at a news conference in the Executive Mansion on Saturday, Feb. 2, that he is not the person in the racist photo in the East Virginia Medical School yearbook and he will not resign.

Gov. Ralph Northam, D-Va., was ready to moonwalk at a press conference this Saturday — he surveyed the stage, presumably to determine whether or not he had enough space to let loose, but his wife put a stop to the whole thing from beside him by saying, “inappropriate circumstances.”

Seemingly amused, Northam repeated his wife’s words to those gathered, as if he didn’t understand the gravity of the situation. The “inappropriate circumstances” involved a photo from his 1984 medical school yearbook that shows a man in blackface standing next to a man dressed in a Ku Klux Klan robe.

Since the photo surfaced Friday, the governor confirmed and then subsequently denied that he was one of the men in the photo. He currently faces calls from his party and his constituents to resign, which he is refusing to do. He is far too defensive of something that has no defense, and should immediately resign from office as the vast majority of his fellow Democrats demand.

“I am deeply sorry for the decision I made to appear as I did in this photo and for the hurt that decision caused then and now,” he said in his first statement Friday. “This behavior is not in keeping with who I am today and the values I have fought for throughout my career in the military, in medicine, and in public service. But I want to be clear, I understand how this decision shakes Virginians’ faith in that commitment.”

Then in a strange 180-degree turn the next day, Northam told press that after taking a better look at the photo, which was published on a page of the yearbook featuring his name and other pictures of him, he couldn’t remember that situation and therefore wasn’t one of the people in the photo.

Despite the overwhelming opposition to his continued tenure as governor, Northam seems intent on working through the scandal, as he mentioned in his original statement.

“I recognize that it will take time and serious effort to heal the damage this conduct has caused,” he said. “I am ready to do that important work. The first step is to offer my sincerest apology and to state my absolute commitment to living up to the expectations Virginians set for me when they elected me to be their governor.”

Whether he knows it or not, Northam’s political career is over. There are some offenses that are unforgivable, whether they happened more than three decades ago or just yesterday. That’s how it has to be in order to combat racism, sexism and bigotry, to prevent people from thinking such offenses can easily be forgiven. We can’t forgive and forget just because the perpetrator recognizes — or doesn’t — exactly what he did wrong and apologizes for it.