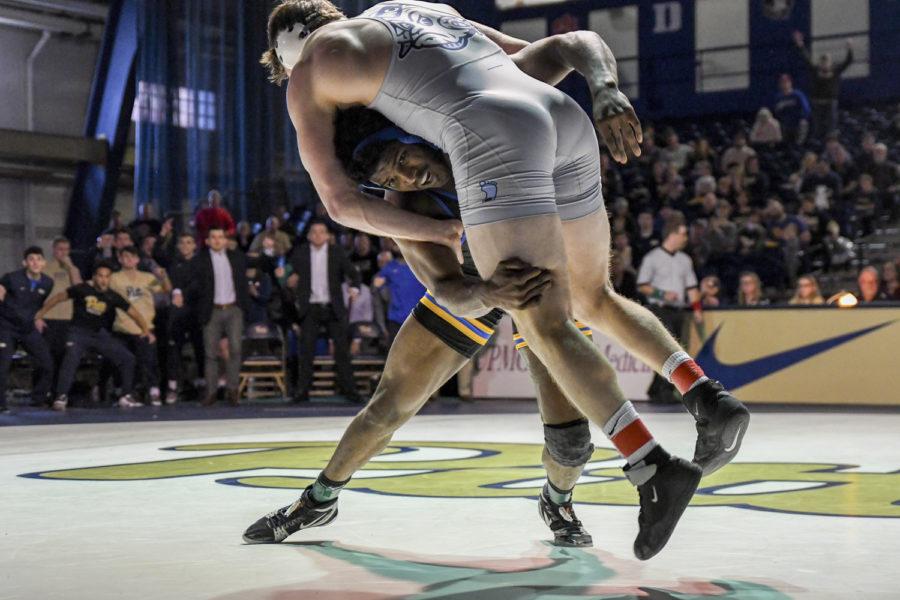 Among the wrestling team continuing its losing streak, the gymnastics team suffering a close loss and the swimming team falling to a high-ranked opponent, it was a weekend to forget for Pitt athletics. In an otherwise bleak three days, the tennis and track and field programs provided moments of victory with set wins and podium finishes.

Pitt’s tennis team had a busy weekend with back-to-back home sets against the University of Delaware Fightin’ Blue Hens and the West Virginia University Mountaineers.

The Panthers cleaned house against the Blue Hens on Saturday, winning five of six singles matches and then sweeping the doubles in a match that saw each Panther take part in at least one victory.

Senior Gabriela Rezende and sophomore Claudia Bartolome were the Panthers’ top performers of the day, both sweeping their singles matches by identical scores of 6-2 and 6-4, before combining to win doubles 6-2.

In the Backyard Brawl on Sunday afternoon, Pitt couldn’t muster the same success and dropped a 5-2 decision to the Mountaineers.

The duo of Bartolome and Rezende led the way in the losing effort once again, each recording singles victories and linking for another win in doubles competition. However, no other Panther was able to come away with a positive outcome.

The loss brings Pitt to 2-3 on the season, and the team will resume action at the Oxford Athletic Club when it hosts Akron Thursday at 8:30 p.m.

A number of individuals and relay teams from Pitt’s track and field team traveled to the University of Michigan this weekend to take on a number of top-tier teams in the Power Five Invitational, with several Panthers coming away with podium results.

Sophomore Greg Lauray cleared 2.13 meters in the high jump, good for the gold medal and a spot in Pitt’s record books as the second-best jump ever, while junior Shyheim Wright took second place in the 60m hurdles, his 7.97-second run also making the No. 8 spot on Pitt’s all-time top ten list.

On the women’s side, the distance medley relay team of Ally Brunton, Aysha Muhammad, Mikaela Vlasic and Miranda Salvo came in second place, the top point-earner for the Panthers. The quartet’s time of 11:39.01 also found its way into the Pitt record books as the third-fastest ever ran.

The Panthers’ next meet will be the Doug Raymond Invitational hosted by Kent State University on Feb. 8 and 9.

A week after sweeping the Western Pennsylvania Invite at home, Pitt’s swimming and diving team fell short in a dual meet against the Ohio State Buckeyes, whose men’s and women’s teams are ranked nationally at No. 13 and No. 15, respectively.

Sophomore Blaise Vera had another successful outing, winning the 25- and 75-yard freestyles as an individual. His relay teams starred as well, as he won the 200-yard medley along with junior Luke Smutny and sophomores Jason Young and Ellis Cannon.

The 200-yard freestyle relay with Vera and Cannon, as well as sophomores Armin Remenyi and Alec Hoch, broke the school record they set a week ago, but it was only good enough for second place.

On the women’s side, Pitt junior Krista Jones broke a school record in the platform dive with a score of 265.58 and junior Sarah Giamber won the 600-yard freestyle with a time of 5:56.40. But junior Valerie Daigneault was the star of the day, winning the 75- and 125-yard backstrokes and anchoring the gold-winning 200-yard freestyle relay.

Despite the losses, head coach John Hargis held faith in his squad after the meet.

“This is definitely the most confident team I’ve had during my time at Pitt,” he said.

Next up, the women’s team will take part in the ACC Championship beginning Feb. 20, with the respective men’s championship starting Feb. 27.

The gymnastics team lost a close tri-meet at Fitzgerald Field House this weekend, finishing third with 193.550 total points behind the Temple Owls (194.200 points) and the University of North Carolina Tar Heels (194.050).

Despite the tough loss, there were positives to be had from the matchup — senior Lucy Brett won the uneven bars with a score of 9.850, her first individual title of the season. First-year Kiley Robatin achieved a standout performance on the beam, scoring the Panthers’ first 9.900 in any event this season, but it was only good enough for second place.

Other podium appearances for Pitt included second place for senior Charli Spivey in the floor exercise (9.850), a second-place tie for first-year Olivia Miller on bars (9.750) and third place for sophomore Haley Brechwald on vault (9.825).

The Panthers will travel to Raleigh next weekend to take on the NC State Wolfpack in an East Atlantic Gymnastics League dual meet.

Pitt’s No. 13-ranked wrestling team continued its ugly skid this weekend, losing 19-16 to No. 17 North Carolina at home. It was the Panthers’ third loss in a row, and it happened in dramatic fashion with heavyweight Demetrius Thomas losing the deciding match in sudden-death overtime.

Despite the disappointing finish, the close result was at least improvement over the blowout losses of the past two weeks. Redshirt junior Kellan Stout had a clutch performance to tie the game in the penultimate round, and redshirt freshmen Micky Phillippi and Nino Bonaccorsi both recorded victories, along with redshirt junior Taleb Rahmani and senior LJ Bentley.

The Panthers will be back in action next week with a doubleheader against Gardner-Webb and Davidson on Saturday, Feb. 9, and then an ACC matchup at NC State the following day. The team is now 8-3 in the season, but 0-2 in conference play.