From High School to College, former teammates reunited at Pitt 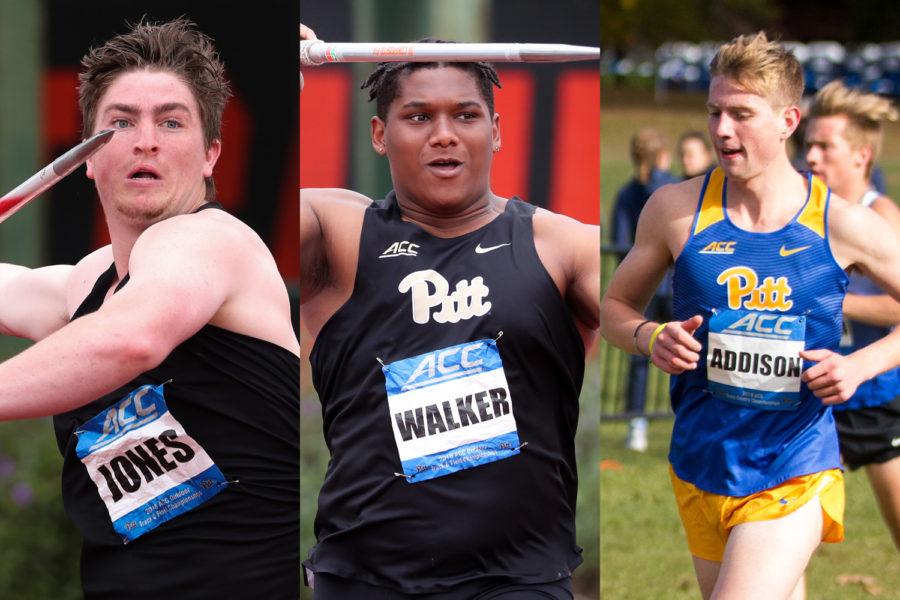 When Grant Jones was trying to convince Noah Walker, his former high school teammate, to come to Pitt, he probably didn’t know he would be recruiting his biggest competition in the coming years.
Jones, a redshirt junior thrower, and Walker, a sophomore thrower, are two of the three current members of the track and field team who attended La Salle College High School, about half an hour north of Philadelphia. The third is first-year distance runner Evan Addison.

“I was really close with Noah because he’s also a thrower. It’s been fun to watch him develop over time,” Jones said. “Addison was a freshman when I was a senior, so I didn’t know him well, but I knew he was good.”

When it came time for Walker to visit Pitt, Jones was the one who showed him around. But he was planting seeds about Pitt long before that first visit. Anytime Jones heard Walker’s family talking about college and Walker’s recruiting process, Jones would be quick to remind them of Pitt.

“I’m close with his family,” Jones said. “So when they would talk about college, I’d always remind them, ‘Pitt’s cool, you should think about that.’”

Walker considers Jones as a brother to him and also views him as the reason why Pitt coaches started looking at him in the first place. According to Walker, Jones told the coaches about him after he came to Pitt –– and it was because of Jones that they started to look at Walker.

While head coach Alonzo Webb did admit Jones helped put Walker on the radar, the recruitment process isn’t that simple.

“I have a recruiting coordinator. He recruits for all the different events, but the events coaches recruit their respective events,” Webb said. “It happened by chance.”

Jones and Walker both knew of Addison in high school, but they weren’t as close with him because of the difference in events and age.

“We were teammates [in high school] and had the same goals,” Addison said. “Being the lone wolf as a distance guy was weird, but knowing people coming in who were from the same school was nice.”

Walker could relate to Addison’s situation, knowing how much it helps to have people you know already there.

“Having other people from your school here, it’s a little bit more of a homey feeling,” Walker said. “You won’t be as nervous.”

While Addison was still in high school, he was following Jones’ and Walker’s careers. Walker placed third in the javelin as a first-year, becoming the second Panther to be named first-team All-ACC for javelin in school history. Jones came in fourth in the same event.

Addison knew both Jones and Walker enjoyed Pitt, so when it was time to make his decision, he reached out to them. For Addison, knowing that people he went to high school with were on the team and were enjoying their times there really helped his decision process.

But for the coaches, it made no difference.

“They just happened to be really good athletes all at the same school,” Webb said. “I don’t even know if our distance coach knew the throwing coach was recruiting guys from La Salle as well.”

Now the three are back on the same team for the first time in four years. And not much has changed since high school.

“Being in different events, I don’t see them on a day-to-day basis,” Addison said. “But at meets, I definitely see them and I always liked watching them in high school. I like to check up on how they’re doing.”

All three of the guys know what it’s like to experience success –– they all earned trips to the national meet as seniors in high school and won numerous medals.

Even though they are originally from Philadelphia, they have each managed to adjust to Pittsburgh just fine –– even though they still wear Philly gear.

“I’m a big-time Philly sports fan, and I’m not shy about it,” Jones said. “I do really like Pittsburgh. It’s a lot more of a homey feel, but I miss cheesesteaks. I really love Philadelphia, but I really love Pittsburgh too.”

Walker agreed that Pittsburgh is similar to Philly, but not as busy, which he likes. Addison said he likes both cities, but notes how much smaller Pittsburgh is.

Despite the close bond the three athletes share, they interact with the other members on their team just as much as they do with each other.

“It’s just been a natural progression, normal like the rest of the athletes,” Webb said. “It’s not like those three athletes only hang out together, they hang out within their event groups.”

“They want to be the best,” Webb said. “Grant wants to beat Noah, Noah wants to beat Grant. As far as Addison goes, he has a great relationship with them and they have a great bond because of the school they came from.”

The thing that stands out about all three, besides their hometown, is their competitiveness.

“All three of them are really, really good, and they want to be the best,” Webb said.