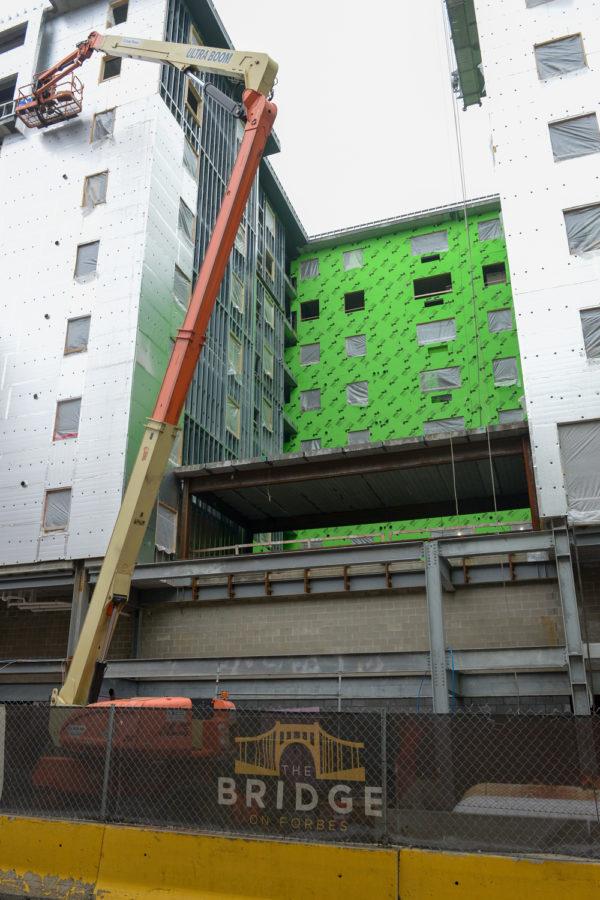 The Bridge on Forbes in West Oakland is currently still under construction.

Beginning this August, students will have another off-campus housing option.

Last week, Pitt approved a three-year lease for up to 230 students to be housed in 87 apartments inside The Bridge on Forbes, a new upscale apartment complex that is still under construction in West Oakland.

This additional housing is part of an ongoing effort to provide more housing for Pitt students. Beginning last fall, Pitt housed on-campus students on two floors in the Wyndham Hotel on Tennyson Avenue.

“The Bridge on Forbes has been great to work with and this is a real win-win for both parties. The need for additional housing is due to the increased demand from students wanting to attend the University of Pittsburgh. The three-year lease is designed to assist us with providing quality housing for our students,” Joe Miksch, a Pitt spokesperson, said.

Pitt will pay around $10,000 per apartment at The Bridge on Forbes each semester, but said students will be charged rates similar to other apartment-style housing options. Graphic by Jon Moss | Online Visual Editor

According to Miksch, the apartments on 3423 Forbes Ave. will be priced similarly to other apartment-style housing options provided by the University, like Bouquet Gardens.

“The price is comparable to the on-campus rate for apartment-style living. Since these are apartments with full kitchens, students will be charged the on-campus apartment rate,” Miksch said.