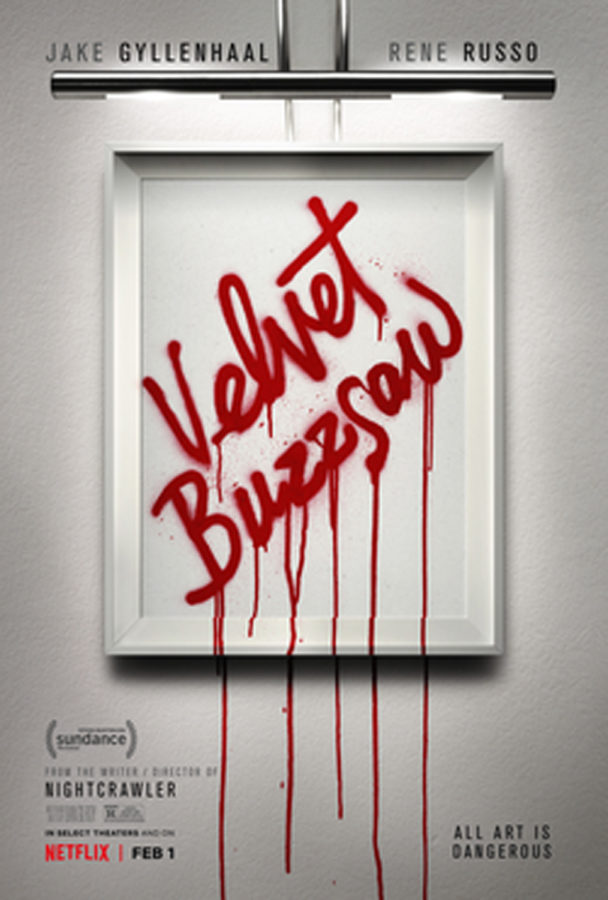 Following the success of “Birdbox” and “Roma,” Netflix has dropped its latest project, the highly anticipated film “Velvet Buzzsaw.” It is a story of art, murder and intricate instruments of murder, with Jake Gyllenhaal making a return to his cinematic roots in eccentric characters for the first time since Donnie Darko and “Nightcrawler.”

“Velvet Buzzsaw” follows various participants of the very niche contemporary art scene in Los Angeles. Rhodora Haze (Rene Russo) is a passionate musician turned into a soulless art gallery owner, consumed in a battle of greed and power with the other prominent gallery owner in town, Jon Dondon (Tom Sturridge).

To maintain her gallery’s position as the best in LA, she constantly panders to the interests of Morf Vandewalt (Gyllenhaal) a self-righteous, idiosyncratic art critic whose words have enough power to demolish an entire art gallery.

The story takes off when Rhodora’s ambitious assistant Josephina (Zawe Ashton) finds her neighbor, Vetril Dease (Alan Mandell), dead outside of his apartment with hundreds of his paintings scattered throughout his room. She takes his paintings and shows them to Rhodora and Morf with the intention of being promoted.

Morf is vehemently entranced by Dease’s art, an uncharacteristic behavior that Rhodora takes note of. Rhodora and Josephina see an opportunity here to make millions of dollars through exhibiting and selling Dease’s art, as Morf delves deeper into abstracting the meaning of Dease’s art for a book he intends to write and sell.

After a bit of circulation, Dease’s art reaches the peak of prominence in the LA art community with buyers tossing millions upon millions of dollars to get their hands on one of his exclusive, mesmeric paintings.

However, Rhodora, Josephina and Morf quickly learn the hard way that Dease’s macabre art is far from one of your simple canvas paintings, as people profiting from his art begin to die in strange and grotesque ways.

It’s ironic to write a review for Dan Gilroy’s latest film “Velvet Buzzsaw,” considering it scrupulously mocks the modern methodologies of all artistically inclined critics to either indelibly praise or condemn someone’s work with no middle ground. However, it’s even more ironic to consider that “Velvet Buzzsaw” serves as a perfect contradiction to its comment, as a film that hovers between the lines of good and bad.

On the surface, it appears to fit the stereotype of your typical A24-type thriller, with its fastidious attention to detail, psychologically troubled characters and complexly obscene plotline for the sake of being unorthodox, but really, it’s a comedic pastiche of this growing style of filmmaking.

As a comedy, which the director subtly implies the film to be, “Velvet Buzzsaw” brilliantly delivers a deadpan style of humor. It impassively presents these dialogues of highbrow jargon and exaggerated, insubstantial problems within this prestigious order of art aficionados, but doesn’t forcefully nudge us into emotionally investing in the humor.

The so-called scenes of horror throughout the film are grotesque in nature, yet organically funny because the director doesn’t in any way downplay the serious and horrific tone of the moment. Rather, he indulges in the sheer absurdity of the characters and the situation they’re in.

That being said, the brilliant comedy in “Velvet Buzzsaw” is counterbalanced by its structure. The editing is more reminiscent of a television show than a film, with odd fades to black during suspenseful and climactic scenes, as if a commercial break was about to happen. There are also some questionable edits littered throughout the film.

For example, the director chooses to follow up an intense death scene ending in a jump scare with an unrelated scene involving a plotline introduced 30 minutes earlier in the film. Directly following this unrelated scene is the aftermath of the death scene, which would have provided the morbid transition necessary to sustain tension.

These minor lapses in editing reflect poorly on “Velvet Buzzsaw,” but its primary flaw is its lack of a compelling story. The film is largely defined by its subliminal messages, and in that regard, becomes too absorbed in what it’s critiquing rather than what it is. The film narrative operates in a string of comedic or shocking moments with no redeeming end to cohesively tie it all together.

Though Gyllenhaal is known as an A-list actor, this film does not speak to his talent in the same way of his past films. “Velvet Buzzsaw” is a film that is seemingly obsessed with itself and only worth a watch if you want to see ironically funny horror.