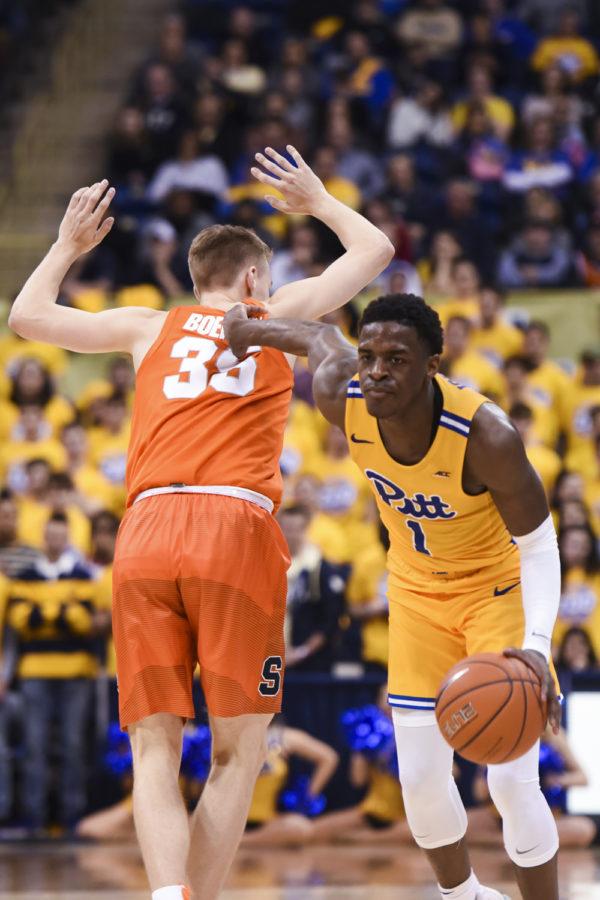 The Pitt men’s basketball team traveled to Wake Forest Tuesday night with both teams looking to snap a five-game losing streak. In a game that saw 10 ties and seven lead changes, the Demon Deacons made clutch plays at the right times to deal the Panthers yet another loss, 78-76.

Pitt got off to a hot start offensively, with first-year guard Xavier Johnson scoring the game’s first five points and senior forward Jared Wilson-Frame adding a 3-pointer to secure an 8-0 lead.

The Pitt perimeter defense suffocated the Demon Deacons — with fewer than eight minutes to go in the first half, Wake Forest had found almost no success offensively outside of the paint. The Panthers’ shooting cooled down as well, hitting below 40 percent of their shots from both the field and the 3-point line.

The leading scorer early on was Wilson-Frame, who drained three 3-pointers in the first half alone. He came in as Pitt’s best sharpshooter, having made at least four 3-point field goals in four of the past five games.

Notably, first-year guard Au’Diese Toney picked up some minutes throughout the first half after missing time with a hand injury over Pitt’s past few games.

Wake Forest continued to find its rhythm as the half carried on, as Hoard scored his team-leading eighth point to to make it 22-18 Pitt with about five minutes left. The Panthers answered with two highlight baskets, first a circus tip-in in by junior center Kene Chukwuka and then a spinning finish in transition from Toney to put the Pitt lead back at five.

Five unanswered from Wake Forest would tie things up right before the break, but Johnson hit a fast-break 15-foot floater just before the halftime buzzer to give the Panthers some momentum heading into the locker room up 28-26.

Wake Forest guard Brandon Childress, who led all scorers with ten points in the first half, got things going right away with a quick three in the second half to give the Demon Deacons their first lead of the game.

Pitt first-year guard Trey McGowens, who was held scoreless in the first half, looked to reverse that trend in the second half by going hard to the rim, drawing a foul and converting on one of two free throws.

Pitt and Wake Forest traded baskets in the possessions that followed, with multiple lead changes taking place and the most efficient offense of the game coming from both teams. Childress continued to be a problem for the Panthers defensively, hitting from deep no matter how close the nearest defender was.

Johnson helped Pitt answer, hitting an open three and then snagging a steal which he took coast to coast before dishing to McGowens for an easy layup to go up 48-46. Johnson continued his onslaught with an acrobatic lay-in to expand the Panther lead to two possessions.

Wake Forest needed a bucket to shift the momentum back in their favor, and they got just that on a corner three from first-year guard Sharone Wright on back-to-back possessions. Wright then knocked down two more field goal attempts, scoring eight points over the span of three possessions.

Things began to fall apart quickly for Pitt, with the Panthers turning the ball over multiple times and allowing Wake Forest to expand their lead all the way to eight after an unorthodox and-one finish by Wright.

But the Panthers had another run in store, stringing together a nice finish from graduate transfer guard Sidy N’Dir followed by another great finish by Johnson. A ferocious dunk by N’Dir, whose 15 points were 10 above his season average, brought the deficit to just one with 2:56 left.

With the game in the final two minutes and Pitt down two, Wake Forest got back to its roots and scored two points in the paint. N’Dir visibly wanted to will his team to victory, nailing a corner 3 and then playing great defense, which allowed Johnson to get a steal from behind, drawing a foul on the ensuing drive. He went one of two from the free throw line to tie the score at 65, then attacked the Wake Forest defense again on Pitt’s next trip down. This time, he made both free throws to put the Panthers up 67-65.

Johnson went back to the free throw line with 20 seconds to go, but he was unable to hit the first of a one-and-one set of shots. Fortunately for the Panthers, Wake Forest missed three very good looks at the basket before the ball bounced out of bounds. The Demon Deacons retained possession.

Pitt defended the initial shot attempt well, but failed to put a body on Hoard, who was all alone underneath the basket. He caught the airball attempt from Brown and layed it in to tie the game with one second left in regulation. A desperation heave from Johnson missed, and the game headed to overtime.

Johnson kept his hot hand heading into overtime, getting to the rim easily and finishing to give the Panthers early momentum. Wake Forest quickly answered, only to be outdone by Wilson-Frame’s fifth 3-point make of the game. Brown tied things up around the halfway point of overtime, as Pitt wasted two good looks with bad misses. After back-to-back empty possessions in the game, Pitt had the ball trailing by two.

Johnson’s theatrics at the rims could not be halted, and the Panthers tied things up at 74 with less than a minute left. But Brown nailed a heavily contested three on the following possession, and that proved to be the dagger. Pitt continued to shoot themselves in the foot with free throw shooting the rest of the way, missing two of four attempts down the stretch. After a final Johnson free throw miss, a long rebound allowed Wake Forest to dribble out the clock on a two-point win, 78-76.

Pitt’s next chance to snap its losing streak comes at home this Saturday against NC State, who beat the Panthers earlier in the season. Tipoff is set for 2 p.m.