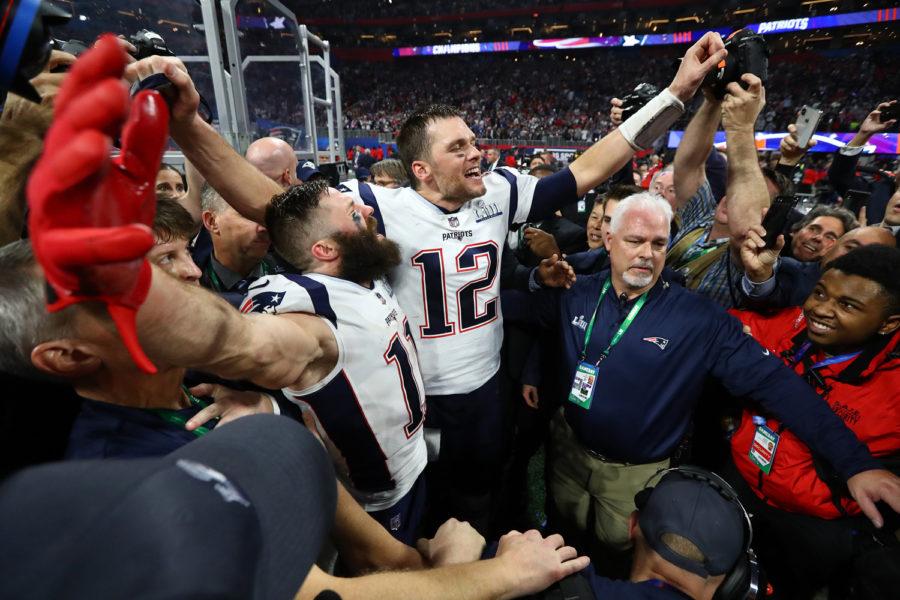 The Super Bowl may be over, but that doesn’t mean Pitt News writers are done talking about it. Tom Brady is 42 years old, and his time may have finally come — don’t be surprised if you don’t see him hoisting another Lombardi Trophy in the future. As for the Rams, they show promise, but their time hasn’t come yet. Offensive-minded teams need a strong defense before they can count on yearly trips to the Super Bowl. Lucky for all of them, the new Alliance of American Football is giving hope for football’s future.

The world saw the New England Patriots defeat the Los Angeles Rams Sunday 13-3 in a lackluster Super Bowl LIII. This was the lowest scoring Super Bowl in NFL history, an outcome that no one predicted. Super Bowl LIII was also Tom Brady and the Patriots’ sixth Lombardi Trophy in franchise history, joining the Pittsburgh Steelers at the top of the Lombardi Trophy food chain, each with six rings of their own.

The Patriot team that Brady just led to a Super Bowl victory was arguably one of the weakest teams he has ever played with. That’s not to say that his team was bad, but Brady is just used to having a better cast around him. He continues to prove all the doubters wrong and just keeps winning.

With potential retirements looming from star tight end Rob Gronkowski and safety Devin McCourty, next year’s Patriots squad will be even weaker than this season’s. That, along with Father Time catching up to Tom Brady, means Super Bowl LIII will be Brady’s last Lombardi Trophy of his Hall-of-Fame career.

The Los Angeles Rams fell to the New England Patriots dynasty 13-3 in Super Bowl LIII in the Rams’ first appearance under head coach Sean McVay. It appears the Rams themselves may be a dynasty in the making, boasting a young coach in McVay and solid talent across the board, from quarterback Jared Goff to running back Todd Gurley to defensive tackle Aaron Donald.

But don’t expect to see them back in the big game next year –– or even for a few years.

There are plenty of NFC teams waiting to take down the Rams. The Saints fell victim to the Minnesota Miracle last season and a brutal missed pass-interference call this season. The Bears are a young team with a solid defense and a smart coach in Matt Nagy. The Eagles have shown they can do it, and teams like the Seahawks and Falcons always have a shot.

Fans have seen this before in past NFC teams that have looked like they were bound for multiple Super Bowl runs in a row. Carolina Panthers quarterback Cam Newton looked unstoppable in 2016, his MVP year, and so did Atlanta Falcons quarterback Matt Ryan alongside a prolific Falcons offense. The 2018 Super Bowl champions, the Philadelphia Eagles, fell victim to injuries and a Super Bowl hangover this season.

The Rams could very well follow the path of teams like the Colts, Steelers and Broncos and make two appearances in three to four years. But a host of problems always seem to plague teams after losing the Super Bowl, and you should expect a brief hiatus before Goff and company get another shot at a ring.

Los Angeles Rams head coach Sean McVay was the darling of the 2018 NFL season. The 33-year-old prodigy captivated fans across the country with his offensive brilliance and boyish charm, while leading the Rams to a 13-3 record and an appearance in Super Bowl LIII. His meteoric rise has made it every team’s primary objective to find the next McVay.

While the Rams boasted the second-best scoring offense in the league, they ran into an absolute buzz saw against the Patriots in the big game. New England held them to just three points on the day, constantly confusing quarterback Jared Goff and allowing only 62 yards rushing. A mix of zone coverage and intricate blitz packages brought an offense that was explosive all season to its knees.

Yes, offense makes the headlines and sells the tickets, but time and time again great defenses have trumped elite offenses. In 2014, Peyton Manning’s Denver Broncos possessed the NFL’s No. 1 offense. They were shellacked by the Seattle Seahawks’ top defense 43-8. Two seasons later, the Broncos avenged the loss with a drubbing of the Carolina Panthers and their league-leading offense in a 24-10 victory.

Between 2000 and 2014, the league’s best defense won the Super Bowl five times. The NFL’s top offense hoisted the Lombardi Trophy just once during that same span.

If great defensive units regularly trounce flashy offenses, why are teams seemingly only pursuing offensive minds with hopes that they will be the next McVay? The Miami Dolphins were one of the few teams to hire a defensive head coach in former Patriots coordinator Brian Flores. Flores served as New England’s defensive play caller and was one of the architects of the scheme that shut down McVay’s Rams.

If the mantra “defense wins championship” really does ring true, then the Miami Dolphins are ahead of the curve. The rest of the league would be wise to follow.

With 10 receptions on 12 targets for 141 yards, Julian Edelman was well-deserving of the Super Bowl MVP award as he played a crucial part in New England’s victory in Super Bowl LIII.

In fact, Edelman’s postseason contributions have been consistently remarkable. Only the legendary former wide receiver Jerry Rice has more receptions and yards than Edelman’s 115 and 1,412, respectively, in the playoffs.

Edelman’s role as a constant target for Tom Brady and his essential contributions to the Patriots’ last three championships led many to begin wondering whether the shifty slot receiver, drafted as a quarterback in the seventh round out of Kent State, could possibly be bound for the NFL Hall of Fame in Canton, Ohio, when he shaves his beard and hangs up his cleats.

Because in case you had forgotten, Edelman was suspended for the first four games of this season for a violation of the NFL’s policy against performance-enhancing drugs.

In baseball, Barry Bonds, Roger Clemens, Mark McGwire and many others had as much success, if not even more, in their sport than Edelman has enjoyed. But they are tainted by their steroid use, continually rejected from enshrinement in baseball’s hall of fame in Cooperstown, New York.

The MLB has a rule under its PED policy that any player who is suspended for a positive test is banned from participation in the postseason. Perhaps it’s time for the NFL to enact a similar restriction. Until then, Edelman’s postseason accomplishments and Super Bowl MVP award will always come with an asterisk.

The AAF, the unofficial developmental league for the NFL

With the NFL season coming to an end, football fans are desperately searching for a new source of entertainment during the offseason. Enter the Alliance of American Football, with rosters filled with NFL hopefuls and former NFL players looking for a second chance.

Getting underway this Saturday with eight teams, the rosters feature former NFL players such as Christian Hackenberg and Zac Stacy, as well as all-time great Mike Singletary coaching the Memphis Express.

Why does this matter to the NFL? The answer is quite simple — the AAF can provide the NFL with a talent pipeline unlike anything it has ever seen before. It’s also a way for players to put their skills on film before entering the NFL. Most NFL teams are only currently able to evaluate new players with a tryout, which is far from replicating the actual pressure and situations of a professional football game. With AAF tape to refer to, NFL executives will have an easier time evaluating the talent of players who have been out of the league for a while.

The AAF has potential to succeed due to its focus on football and access to high-character players. Both the NFL and the AAF only stand to succeed from a strong inaugural season by the AAF.