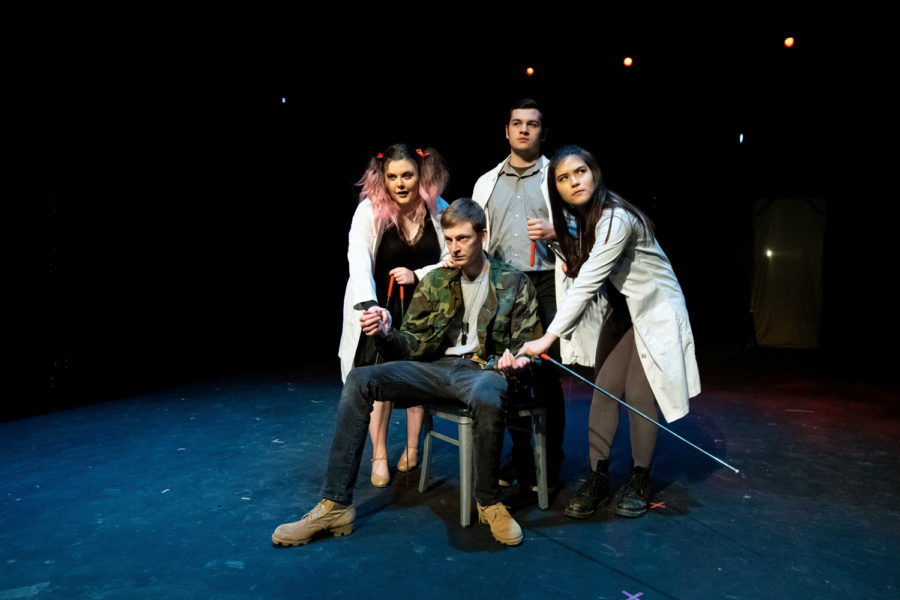 Kyle Corbin as Franz Woyzeck, surrounded by doctors as they attempt to calm him down after losing his temper planning to kill his partner Marie, in “Lab 3: Woyzeck,” directed by Christopher Staley, at the Studio Theatre Wednesday evening.

By Tamara Alchoufete, For The Pitt News

Tragedy is a common trope in the world of drama. It usually starts with a person of importance and favor slowly declining until all they have is lost. One is not used to seeing a working-class protagonist in a tragedy who begins a story with little to nothing. But “Woyzeck” is anything but your typical fall from grace tragedy, and the protagonist shows he is capable of falling even lower.

The German play “Woyzeck” — written by German dramatist Georg Buchner in the late 1800s — is a tragedy, but with a slight twist. It is not epic like “Hamlet” or “Medea.” It follows a normal man, working hard to provide for himself and his family. Because of this quirk, “Woyzeck” is known as a working-class tragedy.

Tragedy met insanity to create the chaotic atmosphere that was the Richard E. Rauh Studio Theatre on the opening night of “Woyzeck.” Buchner based his work on the horrific true story of murderer Johann Christian Woyzeck, who pleaded insanity after killing his wife in 1824. Woyzeck’s case unveiled the curtain on mental illness, among a host of other societal controversies.

Buchner died early at the age of 24 before he could finish his work. Playwrights have been adapting it ever since. Writer and translator Nicholas Rudall adapted the version of the play utilized by Pitt performers during the production Wednesday night. In the notes from the director, Christopher Staley, a second-year doctoral student, he inquires the audience to question “the actuality of the stories we tell ourselves.”

Woyzeck — played by every actor in the production at some point during the show — is a soldier stationed in a small German town, living with his mischievous and lustful wife, Marie (Cheyanne Neuenschwander). The couple has a tough time in the community since Marie and the child were never blessed by the church because the child was born out of wedlock. Woyzeck is soon able to earn money for himself and his family by working basic jobs for the Captain (Jenna Teplitzky) while also taking part in medical experiments and studies for the local doctors (Luke Pomrenke, Diane Brunke).

The doctors force everyone not to go to the bathroom, as natural human function requires, and put them in a stressed atmosphere where they are worked until ultimate exhaustion. Woyzeck seems to be the one affected most by these conditions and it puts everyone around him in danger until the climax of the story where he slits his wife’s throat. The twists and turns of the play, as well as Woyzeck’s spiral into insanity, will have the audience wondering if the murder was cold-blooded or out of his undeniable madness.

All actors had their time to shine through portraying the psychotic stage of Woyzeck’s mind, the intense environment of the militant village and internal conflicts that caused a heinous crime to occur. It was a flurry of emotions for those watching. The audience found humor in Alex Dolinger — a staff writer for The Pitt News culture desk — whose drunken soldier role carelessly played the guitar, sang and wobbled across the stage.

The audience also found terror in the show, as they gasped along with Woyzeck’s daughter (Diane Burke), who shrieked at the sight of Woyzeck during a telling of frightening stories. A portion of the play that resulted in a rupture of applause was when the narrator (Jahir Christian) completely owned the theater with a wig and a feather boa after an empowering duet with Marie about their fallout with the male species.

After finding out his wife was cheating on him with a horse — if you watch it, you’ll understand — Woyzeck spirals further downward. Unlike the nonfictional story the play embodies, Woyzeck is not beheaded for his crimes after being denied his plea of insanity. He is instead crushed by the weight of chattering voices in his mind.

There is no dramatic fall or heroic “Romeo and Juliet”-style suicide scene. Woyzeck simply falls to the ground. It is implied to the audience that his own insanity has killed him. Woyzeck fell to the ground, silently and in an instant. After a few moments of him lying on the stage, the audience erupted into applause, which soon turned into a standing ovation.

“Woyzeck” was an intricate production that called for the utmost professionalism of the actors and it was delivered with effortless skill. Some scenes — particularly those involving horses — could create a cringey facial expression in the viewers. Other times, the audience couldn’t help but laugh. Most importantly, the show took on the tough concept of severe mental illness with grace, a true nod to the performers. This production of “Woyzeck” has done the brilliant mind of Buchner justice amid the insanity and gnashing of teeth.

“Wozyeck” runs from Feb. 6 to Feb. 10 at the Richard E. Rauh Studio Theatre in the basement of the Cathedral of Learning.