What are the odds: NBA post-trade deadline matchups 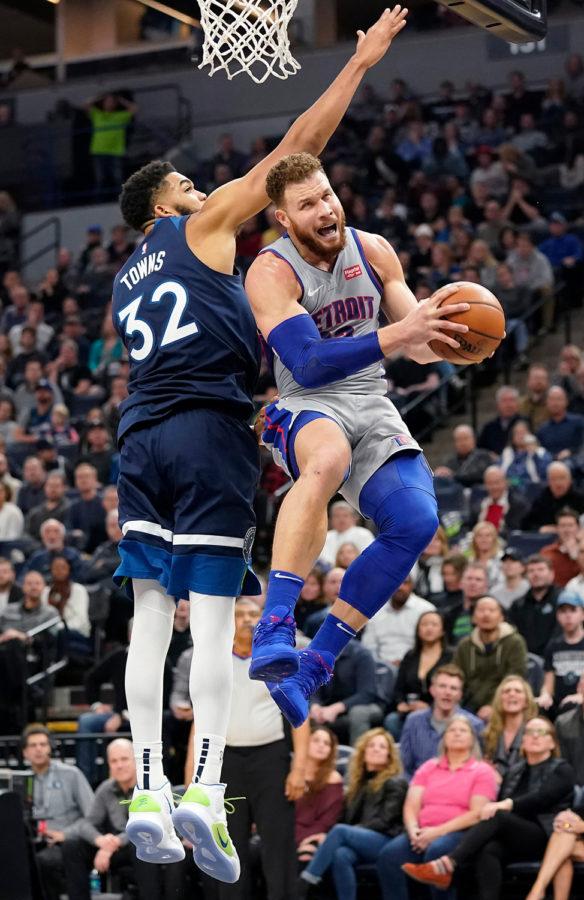 The Detroit Pistons' Blake Griffin shoots as the Minnesota Timberwolves' Karl-Anthony Towns (32) defends during the second half at Target Center in Minneapolis on Wednesday, Dec. 19, 2018. The Pistons won, 129-123, in overtime.

Talk about a boring Super Bowl. The New England Patriots defeated the Los Angeles Rams 13-3 for their sixth Super Bowl in franchise history, tying the Pittsburgh Steelers for most all-time. I finished the eventful betting night by going 5-5 overall, which may only be .500, but I won on almost all the important bets. My season record now sits at 15-13, with plenty of room for improvement.

Despite expecting the Patriots to win 30-24, they still covered the -2.5 point spread. The total for the over/under was a record 56.5 points — I’m very thankful for the lowest scoring Super Bowl in NFL History allowing my under prediction to happen. My incorrect picks included Maroon 5’s opening halftime song, the color of Adam Levine’s shirt and the lack of a fan running on the field. I also did not expect to see New England wide receiver Julian Edelman take home the Super Bowl MVP, but Tom Brady’s mediocre performance allowed Edelman to shine.

Now that football season is officially done until August (queue depressing music), we’ll take a look at some NBA games taking place Friday night. Thursday was the NBA annual trade deadline, meaning that teams had one last opportunity to improve their rosters before the playoff push. The Philadelphia 76ers made one of the biggest deadline deals by trading for Los Angeles Clippers forward Tobias Harris. The 26-year-old has had a tremendous season so far, averaging 20.9 points and 7.9 rebounds per game while shooting a ridiculous 49.6 percent from the field.

Never bet before? Here’s two quick definitions. The spread is a figure that oddsmakers set that predicts by how much a team is expected to win or lose. The over/under is a prediction of the final combined score of both teams.

Analysis: The great Frank Sinatra once sang, “Start spreadin’ the news, / I’m leavin’ today. / I want to be a part of it, New York, New York.” Knicks fans are hoping Kevin Durant and Kyrie Irving sing along with them, as the team made some huge moves to potentially sign the two All-Stars this offseason. They traded away star forward Kristaps Porzingis to the Dallas Mavericks in exchange for point guard Dennis Smith Jr. and center DeAndre Jordan. The move puzzled fans, as Porzingis is only 23 years old and full of potential — but he’s yet to play this season while recovering from a torn ACL, and recently expressed a desire to leave the Knicks. This move is great for the future, as the team is now more likely to land the No. 1 pick and prized Duke forward Zion Williamson.

In his first full season with the Detroit Pistons, All-Star forward Blake Griffin has played extremely well, averaging 26.1 points per game while shooting 47.7 percent from the field. The Pistons made a small move before the trade deadline in an attempt to help out Griffin going forward. They sent former No. 8 pick in the 2015 NBA Draft Stanley Johnson to Milwaukee (he was later traded to New Orleans) in exchange for big man Thon Maker. The Milwaukee Bucks decided to move on from Maker, who requested a trade earlier this season due to playing time. His 7-foot-1-inch frame should help the Pistons by creating space for Blake Griffin to score. Detroit is currently on the outside of the playoff picture, but only by one game. Maker could be the missing piece for the Pistons to sneak into the playoffs.

Bet: The Pistons cover and bet the over.

Analysis: The Chicago Bulls made a surprising trade by acquiring small forward Otto Porter from the Washington Wizards in exchange for forwards Jabari Parker and Bobby Portis. The deal means that Parker’s attempt at restarting his career in his hometown Chicago is over. The former No. 2 pick in the 2014 NBA Draft signed with Chicago last summer in a two-year, $40-million contract, with a team option for the second year. Parker has struggled with injuries throughout his career, including a torn ACL while in Milwaukee.

The Bulls now have Porter, the 2013 No. 3 pick, along with his massive $106.5-million contract that was signed in 2017. Adding Porter gives the Bulls a wing player they can easily work into the offense. The lowly Bulls will have a top pick in the NBA Draft this summer, and would love to add a guard like Ja Morant from Murray State or RJ Barrett from Duke.

The Brooklyn Nets just keep on competing, and showing the NBA how to rebuild slowly without tanking. Currently the No. 6 seed in the Eastern Conference, the Nets are ready to make the playoffs for the first time since 2015.  Guard D’Angelo Russell is averaging a career-high 19.8 points per game this season, and was recently named to the NBA All-Star team for the first time.

Returning to the lineup for the first time since his devastating injury on Nov. 12, 2018, will be guard Caris LeVert. The 24-year-old was averaging 18.4 points per game prior to suffering a subtalar dislocation of his right foot. Videos of the injury proved to be much worse than what actually happened, as most thought LeVert would be out for the season. With Russell and LeVert back together, expect the Nets to continue their growth as a team and prepare for the playoffs.

Bet: Brooklyn covers the spread and bet the over.

Analysis: In one of the biggest moves of the NBA season, the Dallas Mavericks traded for star forward Kristaps Porzingis from the New York Knicks. They gave up Dennis Smith Jr., the No. 9 pick in the 2017 NBA Draft, along with veterans DeAndre Jordan and Wesley Matthews. In addition to receiving Porzingis, who is not expected to play this season, the Mavericks acquired guards Tim Hardaway Jr. and Courtney Lee from New York.

Rookie star Luka Doncic playing with Porzingis will be incredibly fun to watch next season. In a separate trade, the Mavs got rid of Harrison Barnes and his $94.4-million contract; sending him to the Sacramento Kings in exchange for forwards Justin Jackson and Zach Randolph. Barnes is expected to accept his $25-million player option for next season, and should fit in well with a rebuilding Kings team filled with potential stars like Marvin Bagley and De’Aaron Fox. The craziest part of this trade was that Barnes was on the court playing for the Mavs when the trade was announced. The former University of North Carolina star looked shocked to get traded mid game, and I can’t blame him. This goes to show that the NBA really is a business at all times.

Led by potential NBA MVP Giannis Antetokounmpo, the Milwaukee Bucks sit at first place in the Eastern Conference and have the best record in the entire NBA. They are one of the highest scoring teams in the entire league, averaging 117.8 points per game. Against the depleted Washington Wizards on Wednesday night, the Bucks scored 148 points including a team-record 50 points in the first quarter alone. The Greek Freak scored 43 points in the team’s dominant victory.

The Bucks improved their chances of going to the NBA Finals by trading for stretch power forward Nikola Mirotic from the New Orleans Pelicans. Mirotic is averaging career highs this year with 16.7 points and 8.3 rebounds per game. He is known for his 3-point shooting, and the Bucks are the perfect fit — they average the second-most 3-pointers per game with 13.3. Acquiring Mirotic should help the Bucks for the rest of the season, especially during the playoffs.

Bet: Milwaukee covers and bet the over.