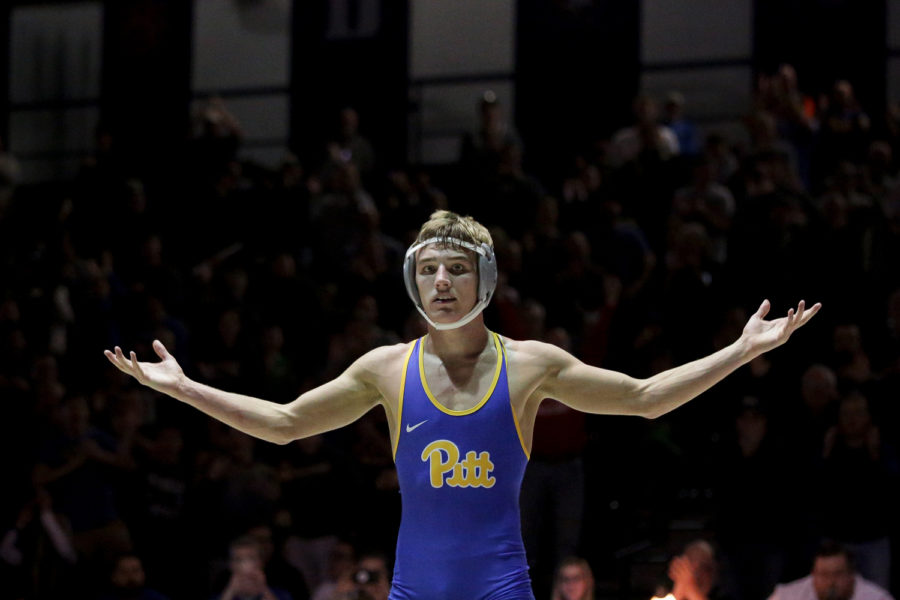 With most of the attention on Pitt men’s basketball’s current skid and the recruits who are and aren’t signing with the football team, it’s been easy for the rest of Pitt Athletics to get lost in the dust. But that isn’t for a lack of talent on the nonrevenue sports teams. The men’s wrestling, women’s basketball and women’s gymnastics teams have all had their ups and downs this season, but they are each anchored by talented players who give them hope for the future of the season and the program.

Pitt wrestling ended its three-game losing streak this past weekend with three wins, including one over No. 8 NC State on Saturday. The Panthers (11-3) have had a successful season thus far, mostly to the credit of redshirt freshman Micky Phillippi.

Phillippi, who transferred to Pitt last year from the University of Virginia, is ranked No. 5 in the 133-pound division. In his most recent win, Phillippi won 17-5, improving to 15-2 on the year.

His biggest win of the season came in Pitt’s loss to then-No. 3 Oklahoma State. Phillippi upset the No. 2 wrestler in the 133-pound weight class, Daton Fix. That was Fix’s first career collegiate loss.

Earlier in the season, Phillippi came in second place in his weight division at the 37th Annual Cliff Keen Las Vegas Invitational. He earned his first of two losses in the finals to the No. 3 wrestler in his weight class, Rutgers’ Nick Suriano.

Phillippi was named ACC Co-Wrestler of the Week on Dec. 4 of last year for his efforts. He will look to ride his current three-match win streak when Pitt takes on Duke Friday at the Fitzgerald Field House.

The women’s basketball team (9-16, 0-11 ACC) has been struggling, but it’s not due to lack of effort, especially from senior guard Cassidy Walsh, who is seeing her highest playing time this season.

After not starting a game the past three years, Walsh is the only player who has started all 25 games so far this season. She is averaging 30.7 minutes per game, a huge jump from 11.8 minutes per game last year. She also leads the team with 768 minutes, 47 minutes more than the next closest player, junior guard Jasmine Whitney, who has 721 total minutes.
Along with her minutes, Walsh’s production has also gone up this season. She has recorded 84 field goals on 267 attempts for a .315 shooting percentage. More than halfway through the season, Walsh more than tripled her 3-pointers from last season, leading the team with 48 so far this year compared to just 15 last year. She is second on the team in points with 239 this season, just behind senior forward Danielle Garven with 257.

Walsh has also played efficiently on the defensive side. She has had 30 steals, two blocks and 80 defensive rebounds so far this season. She had a season high of eight rebounds on Jan. 24 against Virginia and a season-high six steals against Clemson on Jan. 20.

She has been a ray of hope for the Panthers in a season where they lost two players to injury and are struggling all around. It is no question that her loss will be felt next season.

The Panthers and Walsh will look to end their 11-game losing streak on Thursday at the Petersen Events Center against UNC.

Prior to being named the rookie of the week, Robatin earned a 9.900 on beam, the highest score on any event for any Pitt gymnast this season. Her score also helped Pitt record the fourth-highest team score on beam in program history with a 49.100 at the tri-meet against North Carolina and Temple on Feb. 1.

Before her 9.900, Robatin’s career high on the balance beam was a 9.875. Her performances also help keep the Panthers as a whole in the spotlight. Pitt is ranked second in the EAGL in the vault, beam and floor categories.

The Panthers are currently 5-5 overall and 1-3 in the EAGL, but Robatin’s early collegiate success is a source of hope and motivation for the Pitt team, which is currently on a three-match losing streak.

Pitt gymnastics’ next meet will be a tri-meet against Ball State and rival West Virginia on Feb. 22.