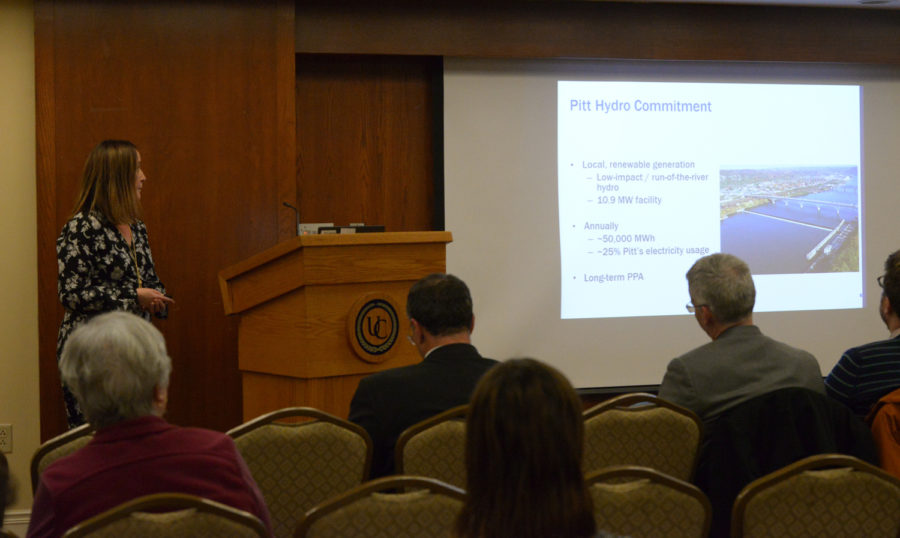 Illona Beresford, senior project manager at the University, notes the importance of sustainability in the University’s future development plans.

Pitt will unveil the finalized version of its campus master plan at the end of this week. It includes a plan for more housing, with a net total of 775 new beds and an increase in sustainability efforts.

But some in the Pitt and Oakland communities have questions about what’s been left out of the plan. At a public meeting at the University Club Monday, some Oakland residents worried the Master Plan will add to what they see as the negative effects of the University and student life on the neighborhood, and representatives of Pitt’s department of music said the plan doesn’t include room on campus for the arts.

At the meeting — the first of four Pitt plans to hold over the next several months — they were given a brief amount of time to voice their concerns. Ron Leibow, senior project manager for Pitt facilities management, who noted this was an “introduction meeting,” focused largely on the presentation of more than 100 slides of information about the master plan and stated the next two meetings would be oriented more toward community feedback.

Over the long-term, Pitt wants to decrease the number of students living in Towers and close Lothrop Hall, opening up a new residence hall near the Chevron Science Center, where Eberly Hall currently sits.

Two weeks ago, Pitt approved a lease for a new student off-campus living option at The Bridge on Forbes, an apartment complex in West Oakland. But it’ll be “sunset” for those apartments after the three-year lease is up, Leibow said.

Jim Earle, Pitt’s associate vice chancellor for business and auxiliary services, said leasing The Bridge, like Pitt’s lease of two floors of the Wyndham Hotel, is intended to be a short-term solution to the shortage of beds on campus.

“Obviously the building on the hillside can’t be up tomorrow,” Earle said. “We do have excess demand for housing, so the lease of The Bridge allows us an interim solution.”

But Mathew Rosenblum, the chair of the music department, expressed concern about what he called a “complete disregard for the arts” in the Master Plan.

“Where the music building currently is, you have student housing. We don’t even have a music department in the future,” he said. “Where’s the arts in this plan?”

Officials acknowledged the lack of a music building in the plan.

“It’s a recognized deficiency and we’re working with the provost’s office on how to deal with that,” Owen Cooks, the assistant vice chancellor for planning, design and construction, said.

Cooks did not say whether the final draft of the plan, which will be released on Friday, will address the issue.

Another Pitt staff member, Christine Berliner, echoed Rosenblum’s concerns. Though she’s an undergraduate adviser in the biology department and not officially affiliated with the music department, Berliner sings in the Pitt Women’s Choral Ensemble. Only a small minority of the women in the ensemble are from the music department, she said, and she’s worried about the lack of spaces for musical groups in the Master Plan.

“There’s a very strong interest in music and the arts, not just from the arts people,” Berliner said. “There is nothing about where those facilities would be reimagined.”

Initially scheduled for Jan. 30, the meeting was pushed to mid-February after frigid temperatures led to the cancellation of events and classes across campus on the original date.

Carlino Giampolo and Marshall Goodwin, who have long advocated for Oakland residents, did most of the questioning on how Pitt’s continued expansion will affect the neighborhood. Giampolo spent last Monday outside Pitt with a bullhorn and a sign that read, among other things, “Why are 5,000 faculty silent while Pitt destroys Oakland,” causing some questions from students.

“I don’t see anywhere in here where you acknowledge the negative impact your institution has had on Oakland’s residential component over the past 40, 50 years,” Goodwin said. “It should have been a premier neighborhood, and it no longer is, and we need acknowledgment, or I can’t believe that you’re sincere about anything other than expansion.”

Leibow said the University is fulfilling the obligations set for it by the City, which include only “mitigating the impact of the developments moving forward.”

Goodwin also suggested the implementation of restrictions that would limit student living to certain areas of Oakland, leaving other areas free from the “noise pollution” and other inconveniences of student neighbors. Some other cities have implemented similar zoning restrictions.

Andrea Boykowycz, another longtime Oakland resident, asked if Pitt would consider opening its shuttle system up to non-students, a possibility Leibow said the University is already exploring.

“The contraposition of the interests of the University and the resident community is longer than my lifetime,” Boykowycz said. “It’s our job to provide constructive feedback.”