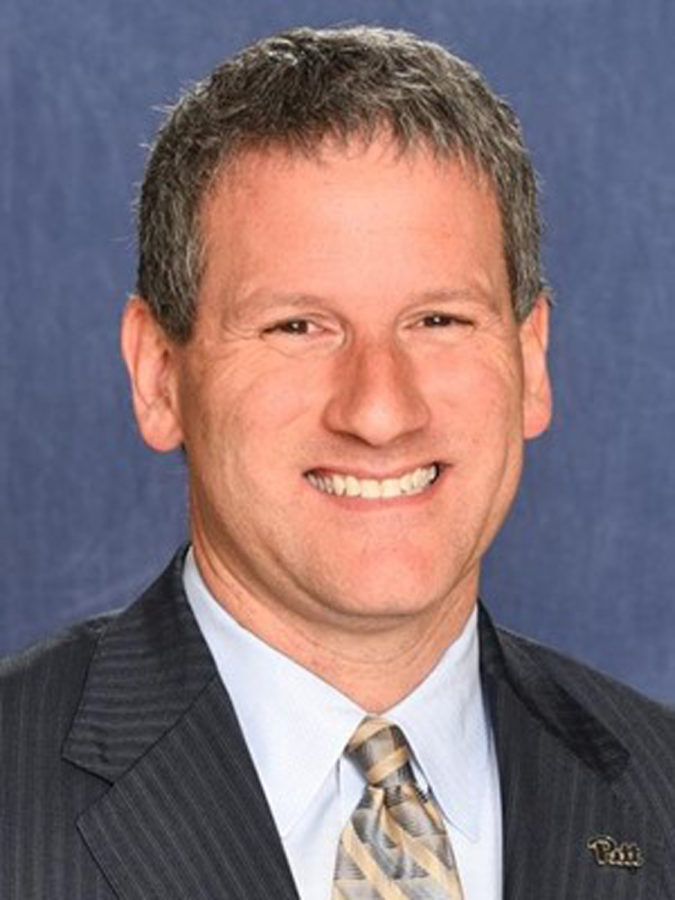 E.J. Borghetti is the executive associate athletic director of media relations for Pitt Athletics, where he leads media operations for Pitt’s 19 intercollegiate sports.

The 1982 Sugar Bowl was one of Pitt’s most iconic football games, featuring the legendary Dan Marino in a 24-20 upset over Georgia. Twelve-year-old Pitt fan EJ Borghetti watched excitedly from the Louisiana Superdome crowd as Marino threw the winning touchdown, recognizing it as an iconic moment.

“I didn’t realize it at the time but I think the excitement and the emotion and the moment and the passion of all the people in blue and gold who were a very small grouping among all the rabid Georgia fans, I think that more than anything else probably planted the seed for me wanting to work in sports,” Borghetti said.

Today, Borghetti serves as the executive associate athletic director of media relations for Pitt Athletics where he leads media operations for Pitt’s 19 intercollegiate sports, publicizing the same programs he cheered for growing up.

Borghetti was raised in New Castle and grew up in a Pitt household, a byproduct of his father, an All-American tackle for the Panthers in 1963. After attending high school, he had a brief stint with the Grove City College football team before injuring his shoulder and switching schools to Pitt.

“I considered Pitt my home and that’s where I wanted to be,” Borghetti said. “Ultimately it was a great choice to come down for my next year.”

For the rest of his college career, Borghetti was an intern with the same department he leads today. Thinking back on his time as a student, he said he valued his classroom education but his internship served him well and prepared him for the professional world. His duties included doing small jobs with all the sports, and his work with the Track & Field program helped him realize how diverse Pitt’s athletic pedigree was.

“Far too often, people just think about football and basketball,” Borghetti said. “We have a great athletic heritage across the board.”

An opening finally popped up at his alma mater, and he seized the opportunity and made the move to assistant director for media relations in 1998. One year later, he was promoted to director. In this role, Borghetti oversees the connection between Pitt athletics and the media, organizing availability among coaches and athletes and creating press releases for publication.

Borghetti has been working at Pitt for two decades now, and he said it never gets old. Borghetti’s family instilled in him a passion for sports and Pitt, and it shows in his dedication to Pitt athletics. Reflecting on his professional career, he made a point to express gratitude for the people who gave him opportunities.

“Hopefully I’ve repaid them with effort and commitment and dedication to the people here,” Borghetti said. “I consider myself richly blessed and I never want to take that for granted.”

In his role as the football SID, Borghetti is at the facilities every day during the season, not only dealing with the media but building connections with the coaches and players. He oversees player and coach interviews during the week, helping the media get interviews with certain players.

One challenge of the job is presenting players to the media after a tough loss or bad week. This is part of the reason why Borghetti believes that relationships are vital — having a rapport with the players enables him to offer guidance when morale is low. He values this time with the football players and is appreciative of the relationships that persist post-graduation.

“That’s part of the reward as well,” Borghetti said. “That’s what makes this profession, in my opinion, the most satisfying.”

Before football games, Borghetti can be found in the press box aiding and greeting members of the media with handshakes and a warm smile. During the game, he ensures there is professionalism in the press box, and gets a consensus for which players the media wants to interview. Postgame, he rushes downstairs to meet with the team and prep players for media availability. His department’s hard work has been recognized nationally by the Football Writers Association of America with the Super 11 award three times.

Borghetti also prioritizes strong relationships with his own staff. Julie Jurich started as an intern in late 2014 before she was hired full-time in the summer of 2015 as an SID. Anytime she needs help or a more experienced opinion, Borghetti weighs in on the matter. Jurich also noted how Borghetti carries a high reputation with other colleagues outside of Pitt.

“Everyone knows him and that’s one thing I’ve found to be pretty cool when I go other places and meet other SIDs. They ask about EJ and how he’s doing,” Jurich said.

While Borghetti can offer his experience as a tool for the younger staff, he also provides wisdom to the veterans on the staff. Matt Plizga joined the department as the basketball SID in 2015 after working at Duke University for 15 years in the same role. Even though Plizga had years of experience, he appreciates his time with Borghetti.

“EJ has been extremely helpful to me in my development in the industry,” Plizga said in an email. “He has provided me with the freedom to lead and grow our department.”

If you’re not involved in sports media, there are still a few places around campus where you can catch Borghetti in action. First and foremost is The Original Hot Dog Shop — or “The O,” as it’s often called — which he cites as the best restaurant in Oakland. He remembers going there with his dad for the first time back when it was just one room.

“I’d be lying to you if I said there isn’t something about those fries that just make my tongue get excited,” Borghetti said. “It’s a staple, an absolute staple.”

The second place is Schenley Park, a spot he has a particular affection and nostalgia for. He likes to bring his wife along on special occasions, and considers it one of the most beautiful parks in the country. That might seem like an overstatement — until you realize he lived right next to Central Park while he was working at Columbia University.

As a final bit of parting advice, Borghetti offered a word to any student lucky enough to call themselves a Panther.

“If an undergrad is reading this or a graduate student, a Pitt experience can change your life in so many wonderful ways, and in turn you can take your experience and change so many other people’s lives in so many different ways,” he said.