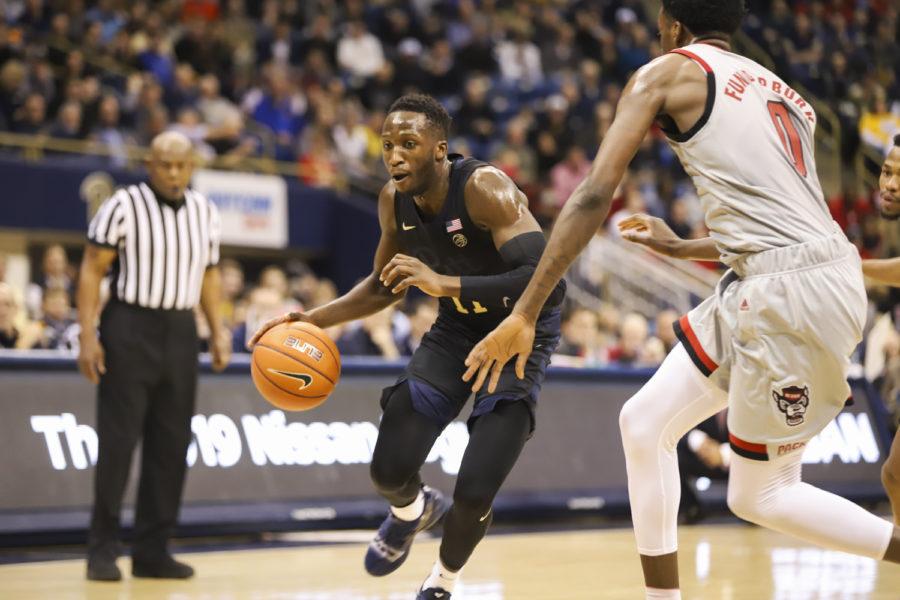 The stage seemed set for Pitt men’s basketball to break its lengthy ACC road losing streak Tuesday night at Boston College. After all, the Panthers’ last road win came in that very stadium against the Eagles in 2017. Like Pitt, BC had just two ACC wins coming into the contest and on top of all that, it was head coach Jeff Capel’s birthday.

None of Pitt’s current players were around when Pitt won its last road game two years ago, and names like Michael Young and Sheldon Jeter feel like memories of a distant past. But then-first-year guard Ky Bowman poured in 15 points for the Eagles in that game and has since developed into one of the ACC’s best players. Now a junior, Bowman entered Tuesday as the conference’s third-leading scorer at 20.3 points per game, as well as BC’s leader in rebounds (7.8) and assists (3.6) per game.

The Panthers managed to force Bowman into one of his worst shooting performances of the season, as he shot just 4-16 from the field. But the dynamic guard affected the game in other ways, and still led his team in every category with 14 points, eight rebounds, seven assists and two steals.

On any other night, Pitt may have been able to take advantage of Bowman’s poor efficiency. But the Panthers turned in their worst shooting performance to date, shooting under 30 percent as a team for the first time all season and making just 20 of 69 field goal attempts. They played especially ugly to end the game, making one of their final 16 shots.

The game featured seven ties and four lead changes, with the first coming at the 14:36 mark after consecutive 3-pointers from first-year guard Au’Diese Toney and senior forward Jared Wilson-Frame gave Pitt an 8-7 lead.

From there, the Panthers struggled to score and got down as much as 20-11. First-year guard Xavier Johnson struggled, missing his first seven shots from the field while turning the ball over twice. It ended up being a rough showing from Johnson, who shot an unsightly 3-19 and led Pitt with five turnovers.

Pitt started eroding the lead, and Wilson-Frame was again the primary catalyst. He entered Tuesday having made at least four 3-pointers in six of Pitt’s last seven games, and drained two more to narrow the deficit to 24-27 with 3:26 left in the half.

Johnson finally broke his scoring drought at the 2:21 mark, draining a corner 3-pointer to make it 30-27. Another Johnson 3-pointer brought the score to 36-32 Eagles at the end of one half.

Bowman led all scorers with 10 points at halftime, but Capel made a concerted adjustment at the break to slow him down. The opening of the second half saw Pitt employ a new defensive approach, which was to smother Bowman the entire way down the court and prevent him from touching the ball whenever possible. It worked, as Bowman scored only four points on 2-10 shooting in the second half.

Four minutes into the second half, first-year Pitt guard Trey McGowens tied the game at 40 on two free throws after an ambitious dunk attempt. Boston College gained yet another lead on a 7-0 run, but Pitt responded to tie the game at 47 with a McGowens 3-pointer. This was an encouraging sign, considering he came in shooting 3-21 from beyond the arc in his previous six games.

Pitt finally took a 49-47 lead on a layup from junior center Kene Chukwuka, and the Panthers controlled the game for the next couple of minutes. But Bowman, held scoreless in the half up to that point, made two crucial buckets to put his team back up 55-53 at the 7:25 mark.

Wilson-Frame nailed his fourth 3-pointer of the game — continuing his impressive streak — to make it 56-57. To answer, the Eagles made two tough 3-pointers of their own to essentially put the game away, holding a 63-56 advantage with 3:35 remaining.

For the remainder of the game, it was as though an invisible lid covered Pitt’s basket. The Panthers tried furiously but fruitlessly to bring themselves back into it, missing their last nine field goal attempts. BC took a double-digit lead, 66-56, and Pitt finally got unstuck from 56 points when sophomore guard Kham Davis sunk a junk-time free throw with 36 seconds left, making the final score 66-57 Eagles.

Pitt’s talented first-year backcourt duo of McGowens and Johnson was a nonfactor in this one, combining for 17 points on 5-27 shooting. Wilson-Frame was Pitt’s leading scorer with 12 points, but it took him 17 shots to get there. Meanwhile, Pitt’s frontcourt tandem of Chukwuka and sophomore Terrell Brown combined for only seven rebounds, once again highlighting the team’s need to snag a big man in the upcoming recruiting season.

Pitt has now dropped 18 consecutive ACC road games and 21 road games overall, casting a shadow over the Panthers’ chances of outperforming their last-place ACC preseason projected finish. Their next opportunity comes against Virginia Tech this Saturday at the Petersen Events Center, with tipoff set for 4:30 p.m.