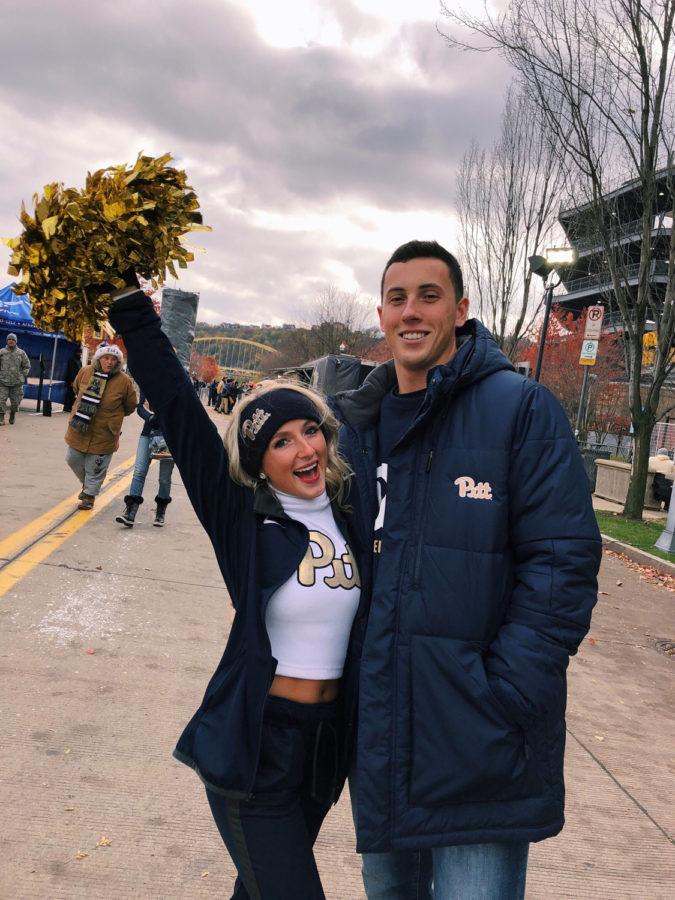 Lexi Blum didn’t think she had time for a relationship. The sophomore biology major was already a member of Pitt’s dance team and had a full class schedule as well.

But last year, she met Dan Hammer, a junior pitcher on the baseball team. They met through mutual friends and eventually formed their own friendship, which then turned into something more. Blum and Hammer have now been dating for six months.

“This year, I’ve somehow made time for another person,” Blum said.

Making time for another is one of the hardest parts of the Blum and Hammer’s relationship, with two hectic student-athlete schedules. In the fall, Blum attends every football game, both home and away. In the winter, she dances at men’s and women’s home basketball games, sometimes even making trips with the team. She also has different appearances and practices to fit into her schedule.

Hammer’s schedule is no easier. On top of practices and training sessions, he competed in fall ball last season and his spring season starts on Friday.

“We usually get to see each other at the end of the day, after practices and class,” Blum said. “We spend most of our time together at night.”

But with the challenges the couple goes through, there are some perks. Since Hammer and Blum are both D-I athletes, they have the advantage of relating to each other in ways other people wouldn’t be able to.

“The best part about dating a fellow athlete is that he understands my schedule,” Blum said.

According to Hammer, it’s all about compromise.

“Sometimes we have to understand that the other person may be too tired to hang out or have too much work to catch up on,” Hammer said. “We try to work around those obstacles.”

Another perk for the couple is getting to talk about their experiences with each other.

“It’s fun talking about the things we have in common, such as lifting routines,” Hammer said. “We also like to watch each other perform in our elements.”

According to Blum, when she and Hammer aren’t busy with practice or on the road, they always try to go watch each other. Her favorite thing about watching him is seeing how motivated he is during his games, and Hammer loves watching Blum dance.

But this Valentine’s Day, neither will be able to watch the other one in their respective sport.

Hammer will be on the road with the Panthers on Thursday prepping for the Diamond 9 Sunshine State Classic Series in Florida, which starts Friday.

While Hammer is on the mound, Blum will be on the court cheering for the women’s basketball team. The Panthers are set to take on UNC tonight at the Petersen Events Center.

Since the couple will not be together on what many say is the most romantic day of the year, they decided to celebrate a few days early — but not with anything fancy. According to Blum, Hammer loves Buffalo Wild Wings, so she got him different sauces and they made their own wings with them and baked cookies.

On the opposite side of the athlete relationship spectrum, there are some relationships, like senior rower Christina Conte’s, where just one of the two hearts belong to an athlete.

Conte and her boyfriend, Alex Bender, met while on a business study-abroad opportunity to Costa Rica and have been together for the past two years. Conte is studying supply chain management and Bender is studying finance. Managing their school work and her athletics around their relationship is a struggle for them both.

She and Bender try their best to meet up during the week after classes, but her rowing schedule is not easy to work around. She has to be up early in the morning for rowing practices, which takes her energy out of staying up late at night.

Unlike Hammer, Conte will be in Pittsburgh this Valentine’s Day and will spend it with Bender. The couple has plans to grab dinner at Nicky’s Thai Kitchen downtown.

Being a student-athlete in a relationship can be a difficult task, but according to Conte, if you are dedicated, you can figure it out.

“If you’re dedicated to the sport and to your significant other, then you will learn to manage your time properly,” Conte said. “Dedication will make your busy schedule more enjoyable and less stressful.”