Column: Semenya’s success due to talent, not hormones 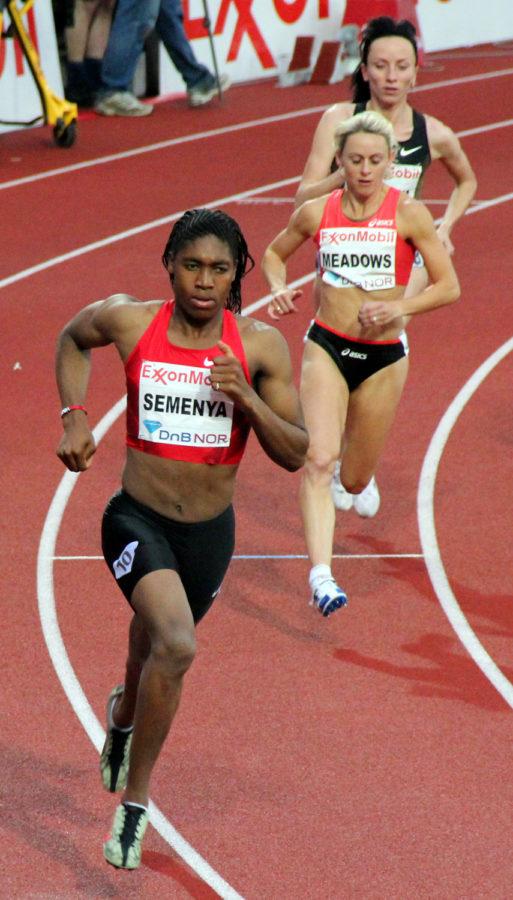 Caster Semenya, a South African track-and-field star, has faced criticism for competing with female runners because of her supposed hyperandrogenism.

For the past nine years, Caster Semenya, a South African middle-distance runner, has undergone scrutiny from the International Association of Athletic Federations, the governing body of track and field, because of her supposed hyperandrogenism. Hyperandrogenism is when there is an extra amount of androgens being produced in the body, including sex hormones like testosterone.

Semenya has been put under the microscope by the IAAF and the media because of her supposed condition, and accused of being a man by her opponents and the public. She and other disorder of sexual differentiation athletes have been treated ignorantly by the organization meant to represent them, with their successes attributed to biology and not their talent. Because of this, Semenya has had her privacy broken and has not been given the recognition she deserves as one of the world’s greatest female runners.

Semenya first gained attention in 2009 after winning the 800m run in 1:56.72 at the IAAF World Championships, the fastest time that year and four seconds faster than her time in the African Championships. But she has often been in the news more for biological reasons rather than for her track accomplishments. Soon after her first major win, many people started accusing Semenya of being a man or saying she had an unfair advantage due to her masculine features.

There were reports that Semenya had undergone a sex verification test to make sure she was a female and not a male in 2009. The results of this test were never disclosed to the public, despite one report from the Daily Telegraph, a publication known for its sensationalism, that she had three times the testosterone level of a regular woman and had internal testes, the gland that produces testosterone.

The IAAF made new rules on the issue of hyperandrogenism, limiting the level of testosterone in female athletes in 2011. In order to compete, these athletes, whose numbers are unknown, had to take hormone-suppressant pills, such as contraceptives, or had to have surgery to have internal testes removed.

After the new rules were put in place, Semenya wasn’t as fast as she had been before and finished second in the 800m at Worlds in 2011 and at the London Summer Olympics in 2012, losing to Russian Mariya Savinova.

She was eventually given the gold medal in both, though, when Savinova, who made comments implying Semenya was a man, was stripped of her medals due to doping.

The Court of Arbitration for Sports found there was no link to greater success of female athletes with hyperandrogenism and it was declared that the IAAF’s policy of hyperandrogenism would be suspended in 2015.

IAAF was given two years to provide evidence that would show athletes with hyperandrogenism were at a greater advantage than those who didn’t have the condition.

After the ruling, Semenya once again dominated the 800m. She won the event at the 2016 Summer Olympics in Rio de Janeiro and again at the 2017 World Championships in London. She also won the bronze medal in the 1500m in London.

But recently, the IAAF decided to once again put limits on testosterone for female athletes for the 400m, 800m and 1,500m runs. The IAAF argued they had the evidence to show that more androgens in the body, which Semenya allegedly has, is related to higher muscle mass and strength. Semenya will be challenging the ruling, along with South Africa’s Athletics Association.

Following this, there is no knowing what the next part of Semenya’s career will hold. The IAAF has released a statement on its findings, saying if a female has male levels of testosterone, they have an advantage.

“If a DSD athlete has testes and male levels of testosterone, they get the same increases in bone and muscle size and strength and increases in hemoglobin that a male gets when they go through puberty, which is what gives men such a performance advantage over women,” the IAAF released in a statement.

Interestingly, a study published in the Journal of the American Medical Association shows that there is “no fundamental difference between congenital disorders leading to elevated testosterone levels, functional or not, and an erythropoietin receptor mutation leading to high hemoglobin.”

Hemoglobin is important for those who are runners or deal with higher altitudes as it is a protein in the blood that helps oxygen get carried to the lungs. The more of it, the better someone is with breathing, running, sprinting and so forth.

The study also notes there are no known disqualifications based on higher amounts of naturally occurring hemoglobin in the body, something that improves lung function and can be very beneficial for runners. The study concludes that “all of these biological differences are miniscule compared with the suspected use of performance-enhancing substances.”

The problem with people continuously focusing on testosterone is that it ignores other factors that go into being a great athlete. These include hard work and dedication and also biological factors like genetics, height and muscle mass.

Banning females with higher testosterone levels is like banning athletes who are naturally taller than others or who can easily build more muscle. There might as well be a ban on athletes born into wealth for having economic advantages that give them access to better training and resources.

It’s also interesting that IAAF is only concerned with the 400m, 800m and 1,500m events –– two of the three events Semenya participates in. The IAAF could also focus on field events and even other sprints, like the 100m, or any of the hurdle events.

This treatment is also only seemingly directed at women athletes for being too strong, too athletic or too fast. No one gets mad at LeBron James for being as athletic as he is or for Usain Bolt for being as fast as he is. Nobody talks about how great soccer player Lionel Messi is, despite the fact he was treated for a growth hormone disorder he had as a kid. It’s likely that without the use of human growth hormones, Messi would not be the type of the player he is today.

Athletes like Semenya should be celebrated instead of consistently criticized. It is incredible to see the strides women have made in sports over the past half century and Semenya is a clear example of that.

There is so much more to her than her supposed high testosterone levels, and to see the amount of time she puts in to be one of the fittest athletes in the world then be labeled as having an unfair advantage is sad to see. Hopefully, the ruling will be in favor of Semenya and courts will find the IAAF will not be allowed to regulate the levels of testosterone in females and will allow women to compete as they should.