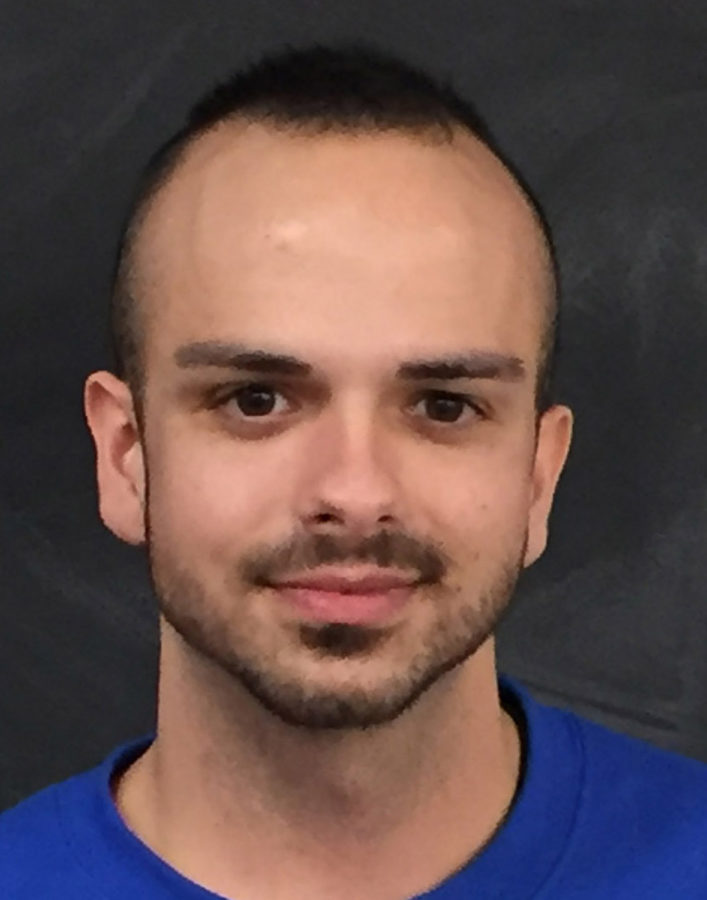 Michael Campbell is a workshop assistant in the Center for Creativity and chair of Pitt Queer Professionals.

To most members of the Pitt community, Michael Campbell has quite the day job. He’s a workshop assistant in the Center for Creativity, a small enclave nestled in the basement of the University Store, where he designs workshops for students that include toppling Jenga towers or making abstract chalk artwork.

But Campbell said he looks forward to weekday evenings the most, when he often gets to network and socialize with fellow members of Pitt Queer Professionals — an organization he chairs.

“I’m a workshop assistant by day, PQP chair by night … Well, I think about my night job during the day, too,” he said with a chuckle, pushing a Lego monstrosity off the couch in the Center for Creativity.

PQP is the only major affinity group on campus designed specifically to serve Pitt’s LGBTQ+ faculty and staff, and it’s somewhat new. When Campbell finished his graduate degree at Pitt in 2016, no such group existed for LGBTQ+ staff, and he said that needed to change.

“During my staff orientation in 2016, the only really active affinity group on campus was the African-American/Black Affinity group,” Campbell said. “When I was hired to work for the Center [for Creativity], PQP was just a concept, so I reached out to the affinity groups coordinator and asked to get involved.”

Under Campbell’s leadership this past year, PQP’s membership has grown from fewer than a dozen when the organization was founded in 2016 to more than 100. PQP secretary Anthony Verardi said the organization provides an important outlet for him and his peers to discuss issues plaguing the LGBTQ+ community on campus.

“The core, unifying mission of PQP is simply the improvement of the University of Pittsburgh for queer people,” Verardi said. “I personally see PQP as a space to convene, as employees, with others who share facets of their identities in order to find support for mutual interests and advance common goals.”

Those spaces are often bars around Pittsburgh where a couple dozen members meet to socialize and network once a week, and where the organization does nearly all of its fundraising.

It’s a setting Verardi said he and many other members enjoy very much.

“It’s therapeutic to have a space to go to and just have a laugh with people who get where you’re coming from in ways that sometimes my non-queer peers and colleagues can’t,” Verardi said.

Topics of conversation at these meetings can range from Pitt to politics to sports. But Campbell said as the organization grows in numbers, it needs to move past idle chit-chat and actually affect positive change for LGBTQ+ people at the University. He wants to hold more events and fundraisers with that goal in mind.

Verardi thinks PQP should put some of its money toward an LGBTQ+ Research and Outreach fund, which would support students doing research or services specifically related to the LGBTQ+ community, where he said funding is often difficult to attain.

In order to actually get LGBTQ+ faculty on the radar at the University, PQP held its first panel in October, “Queer Issues in the Workplace,” which brought together a range of faculty and staff to discuss the “good, bad and ugly” experiences with being LGBTQ+ at work.

“I would say we feel both understood and supported by the University,” Verardi said. “We aim to foster an atmosphere where people are welcome to share their viewpoints openly.”

But Beaulieu did say it’s important for Pitt’s LGBTQ+ faculty to be a voice for students.

“I would like to see more [student] engagement with PQP,” Beaulieu said. “These forms of mentorship are incredibly valuable given that we, as LGBTQ+ people, do not always have access to queer mentors or elders.”

Campbell said he’s already working on several initiatives to connect LGBTQ+ students and faculty, including one in his own work environment — the Center for Creativity.

“We’re gonna have a once-a-month queer crafts hour,” Campbell said. “The organization tends to focus on faculty and staff but we also want to build a larger community that includes students.”

Of the many LGBTQ+ organizations that have cropped up on Pitt’s campus in recent years, nearly all of them are exclusively for students. The Gender and Sexuality Living and Learning Community, for example, houses a dozen LGBTQ+ first-years in Lothrop Hall and boasts the University’s only gender-neutral communal bathroom.

Ryan Ferrante, the resident assistant and a sophomore biology major who spearheads the LLC’s inclusivity discussions, said it’s important for all LGBTQ+ people on campus to have access to safe spaces, whether they’re first-year students or tenured faculty.

“[Safe spaces] just add that extra feeling of knowing people are there for you,” Ferrante said. “Students and faculty can come together and support each other even when the outside world doesn’t.”

As LGBTQ+ organizations continue to grow and flourish on Pitt’s campus, many members, including Beaulieu, look forward to the progress that is to come.

“We respond to the needs of our group members, which means that we will continue to change and grow as our community grows,” Beaulieu said. “I’m always excited to see community service partnerships that inspire Pitt faculty and staff to serve the broader LGBTQ+ community in Pittsburgh.”