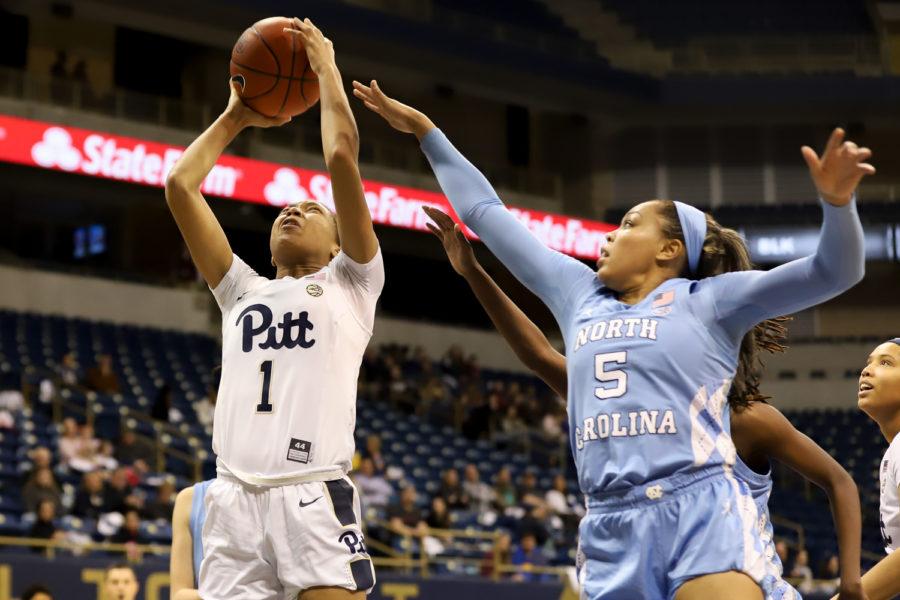 While this season in the ACC has been long, arduous and winless for the Pitt women’s basketball team, the Panthers finally got their first ACC win of the season against North Carolina, 91-78.

It was a special moment for first-year head coach Lance White, who couldn’t hide the joy on his face after notching his first ACC win at Pitt.

“First off, I’m extremely excited and proud of the way our team played today,” White said. “If you stay the course and you keep fighting then great things are gonna happen, and tonight a great thing happened. And I’m really, really proud of them.”

Pitt began its hot shooting right away, hopping out to a 15-6 lead in the first four minutes thanks to a 3-pointer from senior forward Kauai Bradley and two more from senior guard Cassidy Walsh.

UNC went on an 8-3 run to cut the lead back down to four. Sophomore center Janelle Bailey got a shot to go down in the paint, junior guard Taylor Koenen made two foul shots and a jumper and junior guard Shayla Bennett made another jumper on the fast break. Walsh was the only Pitt player to score, knocking down her third 3-pointer of the game.

The rest of the quarter was close, with Pitt taking a slight edge to lead 28-21 by the buzzer. Walsh provided another 3-pointer and a fast-break layup, senior forward Danielle Garven made a layup and a free throw and Bradley made a jumper for the Panthers, while Bailey scored all the points for the Tar Heels on a 3-pointer, two free throws and a layup.

The Panthers did even better in the second quarter and were able to extend their lead to 16 points entering halftime. Pitt ended the period with a 15-5 run, making it one of the team’s best first-half performances this season. Bradley made two free throws and a 3-pointer, Garven got a layup and a jumper, first-year guard Jahsyni Knight scored on a layup in the paint, sophomore forward Jaala Henry made a foul shot and junior guard Jasmine Whitney made a 3-pointer to end the half up 53-37.

The third quarter was closer than the first two, with both teams shooting poorly. UNC outscored Pitt 21-19, but the Panthers still led 72-58 at the end of the third.

Bennett was the leading scorer in the quarter for UNC, scoring eight points on 4-4 free throw shooting and 2-4 shooting from the field. Bailey also was important, scoring six points on 2-4 shooting and 2-4 free throws. Garven was the star for Pitt, tallying eight points to bring her total up to 17 in the game. Other contributors were Walsh, who made another 3-pointer to give her 20 for the game, and Whitney with six points.

The fourth quarter saw the Panthers keep their lead early on, as Pitt led by 13 with five minutes remaining. Then, the Tar Heels went on a quick 7-0 run in less than a minute to bring the game back within six and make the Panthers wary of letting the game slip away. Redshirt senior guard Paris Kea, who entered the game as one of the best players in the ACC, scored only her second bucket of the game with a layup, and Bailey converted an and-one opportunity from a layup of her own.

Pitt responded in clutch time, scoring the next two baskets off a Garven layup and a Walsh jumper. Bennett cut the deficit to seven points with an and-one, but Pitt put the game away on a 7-1 run. Bradley made a 3-pointer and a layup and Garven scored two more points, creating a comfortable 13-point lead when the final buzzer sounded.

“I just want to say thank you to my teammates. They have more confidence in me than I do in myself,” Garven said. “And [White] was preaching confidence before the game started, and one basket led to another and they just kept telling me to keep going, keep going.”

The Panthers have struggled this season with poor shooting, averaging 57.9 points per game, tied for dead last in the ACC. They hadn’t scored more than 60 points in any ACC game this season, and they are 1-16 in games when they score less than that. Afterward, Bradley was asked what gave Pitt the confidence to outscore its season average by over 30 points.

“Our mentality,” she said. “Being able to play in the now. Just overcoming our past mistakes and not letting doubt and mistakes affect what we’re doing in our current situation.”

Pitt will look to get its second straight win when they take on White’s former team, Florida State, this Sunday in Tallahassee, Florida, at 2 p.m.