What are the odds: NBA All-Star Weekend 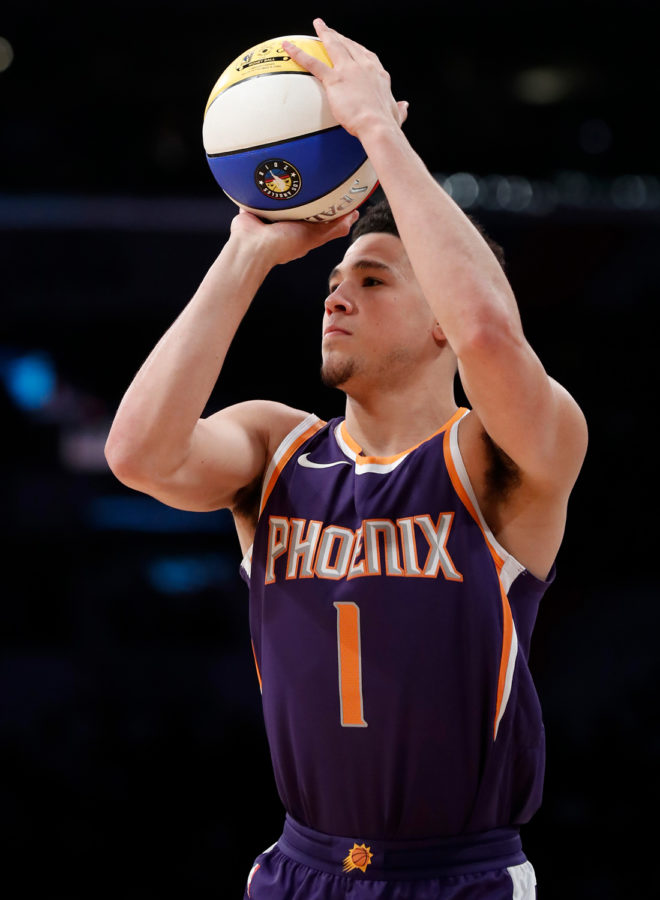 Phoenix Suns guard Devin Booker puts up a shot during the 3-point shooting contest at the 2018 NBA All-Star Game at Staples Center in Los Angeles on Feb. 18, 2018.

Last week’s post-NBA trade deadline betting went extremely well, as I went 5-1 in my picks. My only misstep was that the Brooklyn Nets didn’t cover the spread — they lost in a surprising blowout to the Chicago Bulls, 125-106. Luckily, the high-scoring match up was enough to hit the over, which I correctly picked. My season record now sits at 20-14, and I’ll look to continue my winning streak this weekend.

The NBA’s annual All-Star Weekend takes place this weekend in Charlotte, North Carolina. The weekend’s festivities consist of a Celebrity Game and Rising Stars Challenge Friday night, the Skills Competition, 3-Point Contest and Slam Dunk Contest Saturday night, then the All-Star Game Sunday night. The Slam Dunk Contest has historically been the most popular event over the years, but more recently, the 3-Point Contest has become just as exciting. With a fun All-Star Weekend ahead of us, let’s take a look at who is expected to win these competitions.

Never bet before? Here’s a quick explanation — the numbers next to each player’s name indicate how much money you would win if you bet $100 dollars on them.

Analysis: The Skills Challenge is usually the first event of the jam-packed Saturday night. During this event, players face off in a race down the court to complete passes and make shots as fast as possible. Last year, Brooklyn Nets guard Spencer Dinwiddie emerged from relative anonymity to win the obstacle course-like competition.

My affection for Spencer Dinwiddie grows. Some clutch threes from the Brooklyn guard crowned him the Skills Challenge winner. pic.twitter.com/S8lXD8dKrR

I think Dallas Mavericks rookie sensation Luka Doncic has the best chance of winning, with his ability to make precise passes as a huge advantage. Denver Nuggets star center Nikola Jokic is the best passing big man in the NBA and has the best chance among all nonguards. Sacramento Kings guard De’Aaron Fox deserves to be the favorite since he has a reputation as being the fastest player in the NBA, but my money’s still on Doncic.

Bet: Doncic is my pick to win, and Jokic is a great dark horse.

Analysis: Last year’s champion Devin Booker is back to defend his 3-point champion crown, but he’s going to have a tough time doing so. This year’s competition is filled with the NBA’s best 3-point shooters. Brooklyn Nets guard Joe Harris is second in the NBA in 3-point field goal percentage at 47.1 percent. Portland Trail Blazers guard Seth Curry — brother of Steph — is third in the league at 46.5 percent, and Sacramento Kings guard Buddy Hield is right behind him at 44.9 percent.

Devin Booker left no doubt in the three-point contest with this record-setting performance! pic.twitter.com/TJgEGTGVcE

The Curry brothers will compete for bragging rights over one another for the next year. The elder Stephen Curry of the Golden State Warriors is favored to win because he’s already the most prolific 3-point shooter ever. Someone to also keep in mind is Dallas Mavericks forward Dirk Nowitzki, as the future Hall of Famer is playing in his last NBA season and could go out with a bang.

Analysis: The NBA’s annual Dunk Contest has always been must-see television for fans, as the game’s best dunkers bring out all of the tricks to impress the judges and score the highest dunks. In the past few years, judges have been very willing to give out 10 out of 10s on dunks when the participants don’t really deserve it. I hope this year’s competition will see stricter scoring, making the event more competitive.

Recently acquired New York Knicks guard Dennis Smith Jr. is the favorite, with his high-flying ability seen throughout the season. Smith Jr. can jump like a pogo stick and is expected to show off his ability Saturday night. Rookie Miles Bridges of the hosting Charlotte Hornets and guard Hamidou Diallo of the Oklahoma City Thunder are both big-time dunkers that would love to win the contest in their rookie season. Atlanta Hawks forward John Collins is the lone big man in this event, and is known for powerful dunks.

Bet: Miles Bridges wins in front of the home fans.

At first glance it looks like James was the better GM and selected an unbelievable starting lineup. For reserves, Antetokounmpo selected Bucks teammate Khris Middleton, Oklahoma City Thunder guard Russell Westbrook and special addition Dirk Nowitzki of the Dallas Mavericks. James made a special addition with friend Dwyane Wade of the Miami Heat, as the NBA decided to give both teams a veteran All-Star playing in their final season. Also on Team LeBron are potential future Lakers teammates Anthony Davis and Klay Thompson. James definitely did a better job selecting overall talent, and his team should win the usually high-scoring and defenseless All-Star Game.

Bet: Team LeBron should come out on top by enough to cover.

Analysis: The NBA All-Star Game MVP is an award that gives you bragging rights for life. It shows that you were the best player in a game filled with the league’s best players. Some recent winners include James in 2018, Davis in 2017 and Westbrook in both 2016 and 2015.

It’s been seven years since Golden State Warriors forward Kevin Durant won the All-Star Game MVP, and he’s the favorite for a reason. Durant will be a free agent this summer with speculation that he could leave the Warriors for either the New York Knicks or Los Angeles Lakers. It wouldn’t shock me if James force feeds Durant the ball and lets him go on a scoring explosion, in hopes of showing him what could be next season. Expect captain Antetokounmpo to do his best at winning the award, as well as teammate Curry — both are yet to win the coveted trophy.

Bet: Durant is my pick to win MVP, but if you think Team Giannis will win the game, take Walker — he’s the only member of the hosting Charlotte Hornets and may want to put on a show in front of the home crowd.