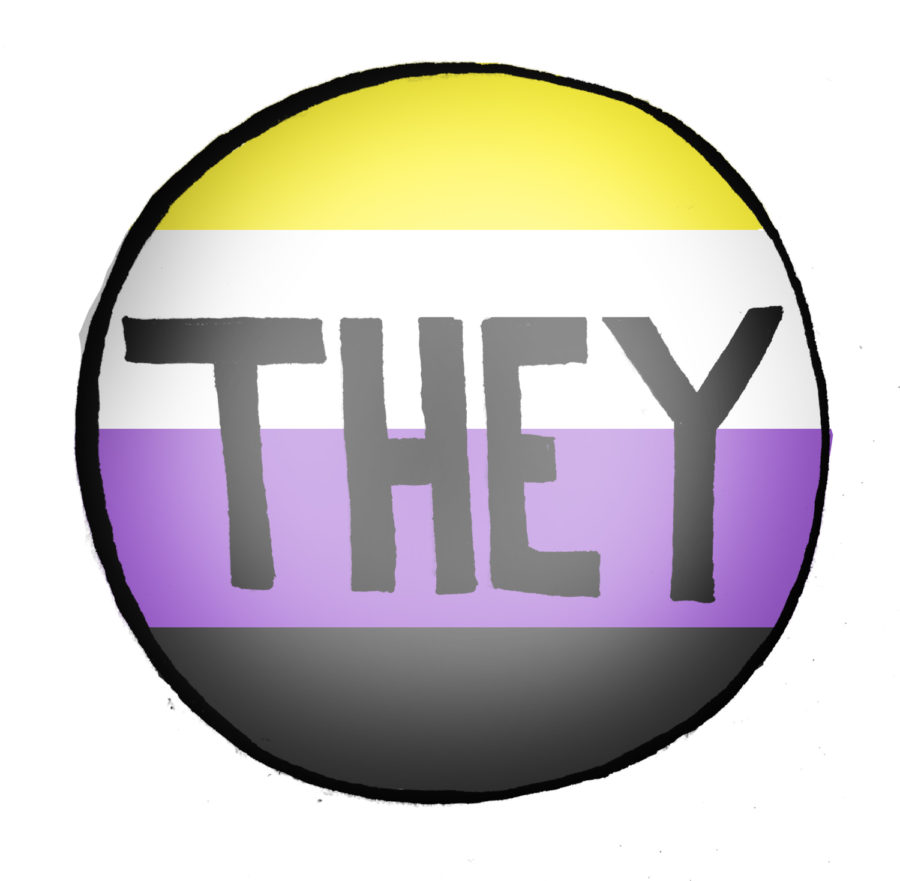 Many of my go-to phrases include words like “girl,” “queen” and “dude,” which are gendered. Even though I used to say these phrases nonchalantly they could have triggered someone who didn’t identify with the genders in these phrases.

Gender’s deep roots in our language — pronouns, nouns, possessives, phrases, etc. — never occurred to me until I tried to talk about a person who identified as non-binary, meaning they identify as neither male nor female and use they/them pronouns. My position of privilege as a cisgender woman allowed me to breeze through daily interactions without considering how gender in speech is triggering to many.

The person I had difficulty describing was Bethany C. Meyers, the host of the body-neutral fitness program called “the be.come project,” which is designed for people who want to become healthier and to accept and love their bodies, regardless of their shape or size. But as I was trying to explain Meyer’s fitness program to my mother, I noticed myself slipping into the conventional she/her pronouns instead of actually using their preferred pronouns, because I never thought much about how gendered my everyday speech was.

I’m lucky that I wasn’t talking to Meyers while I tripped over the pronouns and kept saying she/her instead of they/them. Even though I don’t know how they would have reacted, it is important to not assume that misgendering is something trivial.

Pronouns, for the cisgender community, might not seem like a big deal. But many individuals who identify as non-binary lose accurate representation and feel excluded when people are unfamiliar with the gendered phrasing they’re using.

Instead of assuming a person’s gender identity based on outside appearance, ask them what pronouns they use. Even if you don’t currently know a person who would benefit from gender-inclusive grammatical choices, it is important to attend to what you say, so you don’t run into the same problem that I faced.

Gender-neutral language demonstrates inclusion for people who do not identify with the stereotypical gender binary. It also ensures that you don’t dredge up potentially harmful memories for people through incorrect language usage.

Few people have conducted research that would accurately assess the number of non-binary people in society, and much existing research, including this study from the Pew Research Center about gender in the United States, does not include gender identities outside of “man” or “woman.”

Many people also conflate non-binary identities with being intersex, which describes individuals born with anatomy that differs from the rigid male and female definitions. People have a limited understanding of gender, sex and sexual preferences.

Since people identify as non-binary or simply prefer to not be limited to a gendered system, the practice of gender-neutral vocabulary is essential. It is impossible to tell who identifies as non-binary, so language inclusivity is critical. One way you can practice using they/them instead of he/her pronouns is to say a person’s name when you would typically insert a pronoun.

If a person was named Charlie, instead of saying he/she, you would say “Charlie wants water.” Even better than that is using Charlie’s preferred pronouns, and saying “they want water.” There is even a guide that MIT students made about how to pronounce and use gender-neutral words and pronouns, like “ze,” “xe” and “e,” which are gender-neutral subject pronouns like “he” and “she.”

This example represents the most basic of situations, but it’s easy to slide back into habits when you stop thinking about it. Even so, gender-neutral speech needs to be a priority.

And language goes even further beyond pronouns and possessives. For example, words like chairman, freshman and policeman all include “man,” which indicates gender. However, alternatives for those words such as chairperson, first-year and police officer can all be used in lieu of the other, gender-indicative words.

The prevalence of gender in our language highlights the reasons why it’s important to begin using gender-neutral vocabulary to be more inclusive to people of all gender identities. People should consider the incorporation of gender-neutral speech in their daily life not as extravagant, but as essential.

If you were addressed in a way that did not reflect your identity, you would be uncomfortable. The basic understanding that people want to be addressed in a manner that reflects their identity reinforces why gender-inclusive language is not a luxury.

You might make mistakes. Then, all you can do is apologize and make sure it doesn’t happen again. The advantage of being cisgender does not absolve you from accommodating those who are not. Teen Vogue even made a how-to guide for incorporating gender-neutral words into everyday life.

The next time use gendered nouns or address someone with pronouns that you assume to be true based on appearances, take time to think about other people who simply want to be addressed in a way that matches their identity.