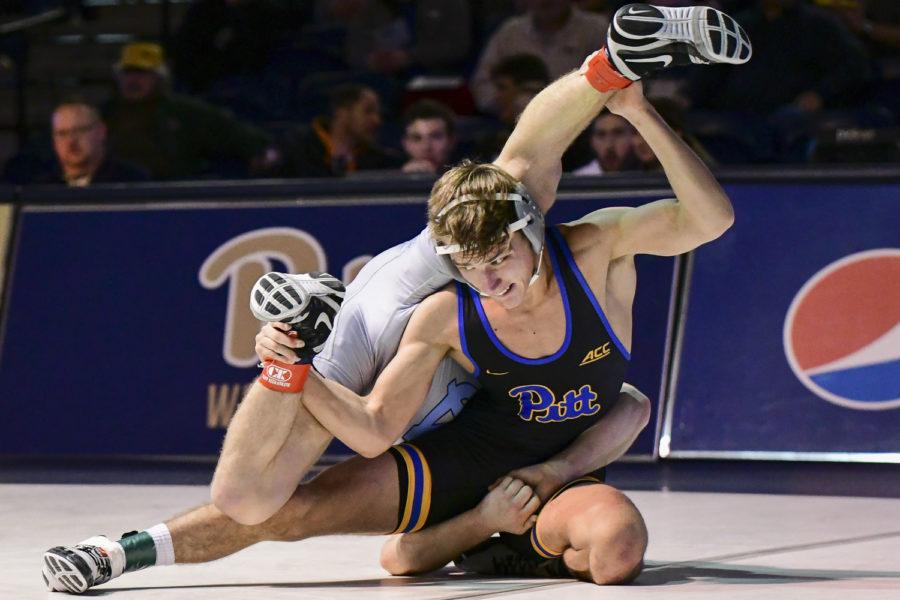 Pitt’s nationally ranked wrestling team edged out another ACC opponent over the weekend, courtesy of a late victory from clutch junior heavyweight Demetrius Thomas. But the Panthers didn’t fare so well on the diamond — the baseball and softball teams went a combined 1-7 in their respective tournaments.

Pitt’s No. 15 wrestling team earned a nail-biting 20-19 win Friday night over Duke, as has been the theme lately. The score was 19-15 Duke after 10 matches, with each team recording five victories. Pitt’s junior heavyweight Demetrius Thomas made the difference for the second straight week, winning by technical fall in the final match to complete the comeback.

The Panthers are now 12-3 on the season and 2-2 in the ACC, with a big matchup against the University of Virginia Cavaliers coming up in Charlottesville, Virginia, this Friday.

The tennis team took care of business against Bowling Green on Saturday, winning 5-2. Seniors Luisa Varon and Gabriela Rezende, as well as sophomore Claudia Bartolome, all swept their singles matches, and senior Natsumi Okamoto downed her opponent in the extra set. Those four accounted for all of Pitt’s wins in the match, as the doubles pairs of Rezende/Bartolome and Varon/Okamoto were also victorious.

The win gives the Panthers a 4-4 overall record, 0-2 in the ACC. They’ll get the chance to improve upon their conference mark next weekend, with a home match against Virginia Tech and an away match at Georgia Tech.

The Pitt baseball team started its season with the Diamond 9 Sunshine State Classic Series in Kissimmee, Florida. It was a shaky start, with the Panthers winning one of four games over the weekend.

The team opened with the first win of Mike Bell’s head coaching tenure, defeating the Villanova Wildcats 7-2 on Friday.  Pitt scored four runs in the third inning to take a lead that never let up, with senior catcher Cole MacLaren driving in two runs with a double. Junior second baseman Alex Amos’ plate discipline was on full display during the game as well, as he plated two runs on full-count walks.

The Panthers faced Iowa the next morning, with the Hawkeyes dominating in a 10-1 rout. Senior Connor Perry scored Pitt’s lone run, a pinch-hit home run in the eighth inning to break up the shutout. Pitt suffered another loss in the afternoon, falling 7-2 to Marshall University.

Against Milwaukee on Sunday, the Panthers surged to early leads of 2-0 and 4-2 before giving up five unanswered runs on the way to a 9-5 deficit. They scrapped their way back by scoring three runs in the bottom of the ninth, but an RBI fielder’s choice by junior Nico Popa and a strikeout by first baseman Kris Soto with runners on second and third left the Panthers just short of the comeback.

Pitt’s record sits at 1-3 after its first regular season action, with games against USC Upstate, Radford and Bucknell next weekend in the Wofford-USC Upstate Tournament in Spartanburg, South Carolina.

Pitt gymnastics went 1-2 in a quad meet against West Virginia, Utah State and Cornell this weekend in Morgantown, West Virginia, coming in third place with a season-high road away score of 195.100 points, as well as a season-high 49.025 on the bars. First-year Olivia Miller scored a career-high 9.825 in that event, while junior Rachel Dugan and senior Lucy Brett, both earned season-high scores of 9.850.

The team is now 6-7 overall and 1-3 in EAGL play in what has been a streaky season. Nearly every week has seen career bests and season highs in individual events, but the Panthers have struggled to put together a complete team performance across the board.

Next Friday, Pitt hosts the Ball State Cardinals and the West Virginia Mountaineers in a tri-meet at the Fitzgerald Field House.

Pitt’s softball team had a rough weekend, losing all four of its games — including three shortened by the mercy rule — in the Big Ten/ACC Challenge in Raleigh, North Carolina.

“This obviously wasn’t how we were hoping to start the season, but we still have the time and the talent to turn it around,” head coach Jodi Hermanek said.

Pitt opened play versus Wisconsin Friday morning, falling 8-0 to the Badgers in a shutout loss. The box score was slightly deceiving, as the game was essentially even aside from a six-run second inning from Wisconsin. This was Pitt’s only game all weekend that went the full seven innings — the rest were shortened by the mercy rule, which stops the game after five innings if one team is ahead by eight or more runs.

The Panthers had to turn right around and face Nebraska in the afternoon, and this game made the first one look close. The Cornhuskers dominated, scoring runs in every inning except the fourth while holding Pitt to just one hit. With Nebraska leading 14-1 after five innings, the game stopped there.

Wisconsin and Pitt faced off once again on Saturday, although the result was the exact same — an 8-0 victory by the Badgers. It only took five innings this time, as the Panthers managed just two hits on the day and couldn’t draw within eight runs.

The Panthers’ worst defeat came on Saturday, again at the hands of Nebraska. The Cornhuskers showed no mercy, racking up 14 runs in three innings to put the game away quickly. Sophomore Brie Horrell provided Pitt’s lone bright spot with a two-run home run in the bottom of the fifth inning, and the Panthers would lose 16-2.

Pitt falls to 1-8 on the season, and will look to improve on that record at the UCF Knight’s Classic next weekend.