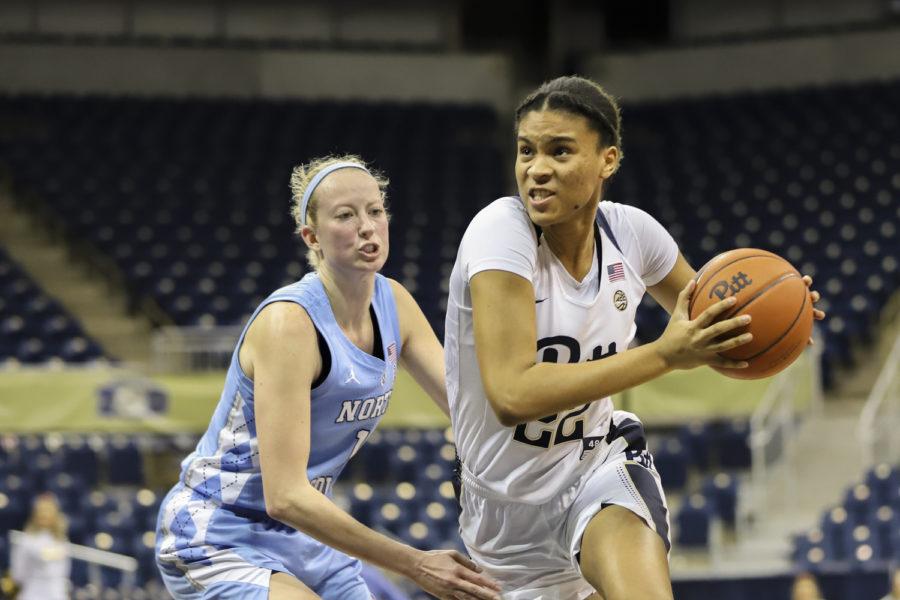 Last week, the Pitt women’s basketball team notched a momentous win over UNC to snap a lengthy ACC losing streak. But the Panthers reverted back to their old ways Sunday, losing 78-46 to No. 21 Florida State in Tallahassee, Florida.

The Panthers (10-17 overall, 1-12 ACC) struggled to make baskets all day, shooting 18-59, or 30.5 percent, from the field. This was Pitt head coach Lance White’s first game against his former team, where he was on the coaching staff for 15 years before taking over the Panthers this season.

The Seminoles displayed their dominance early, jumping out to an 8-0 run and prompting a timeout from White just two minutes in. Junior guard Nicki Ekhomu made a 3-pointer and redshirt junior forward Kiah Gillespie made a layup and a 3-pointer to cap the run.

Senior forward Danielle Garven and sophomore center Cara Judkins both made jumpers to narrow the deficit back to four, but that was the closest the score would get. The Seminoles responded with a 9-0 run to take a 17-4 lead at the 4:48 mark.

The teams essentially drew even for the remainder of the quarter with the Seminoles having a slight advantage, 11-10, to take a 28-14 lead into the second quarter.

Junior guard Jasmine Whitney was big for the Panthers, making two jumpers and a 3-pointer for seven points, and senior guard Cassidy Walsh hit a 3-pointer. For the Seminoles, first-year guard Kourtney Weber made two foul shots, Savannah Wilkinson scored down low twice, first-year guard Morgan Jones made a layup and Ekhomu hit her third 3-pointer of the first quarter.

Despite shooting a formidable 46.2 percent from the field in the opening frame, the Panthers turned the ball over four times compared to just one for Florida State. The Seminoles also dominated on the boards, outrebounding Pitt 12-5.

Both teams scored significantly less in the second quarter. Pitt managed just seven points and Florida State didn’t fare much better, scoring 12 to take a 40-21 lead into halftime. The Panthers shot an abysmal 3-14 from the field and 0-5 from 3-point land while the Seminoles were almost as bad, going 5-13 and 0-3 from 3-point range.

Judkins scored a jumper and a free throw to lead Pitt with three points in the quarter, while senior forward Kauai Bradley scored down low and first-year guard Ismini Prapa made a mid-range jumper. Pitt’s leading scorers on the season — Garven, Walsh and Whitney — were all held scoreless in the quarter.

For Florida State, Gillespie, junior guard Nausia Woolfolk and first-year forward Valencia Myers each had four points in the quarter. Gillespie made a jumper and scored on the fast break, Myers made two free throws and scored down low and Woolfork made a jumper in the paint and from mid-range.

The Seminoles still outrebounded the Panthers in the second quarter, 12-8, but committed more turnovers, 7-5, with the Panthers getting three steals on those turnovers.

The third quarter saw the exact same scoring margins as the second, with Florida State once again outscoring Pitt 12-7. It was another ugly shooting performance all-around, with the Seminoles shooting 5-14 from the field and the Panthers going 3-17, including 0-6 from 3-point range.

Garven finally found a rhythm in the third quarter after scoring only two points in the first half. She made two layups and a jumper to lead the team with six points. A free throw from first-year guard Jahsyni Knight provided Pitt’s only other offensive contribution of the quarter, and the Panthers trailed 52-28 heading into the fourth.

Florida State shot fantastically in the fourth quarter to extend its lead and completely run away with the game. The Seminoles shot 8-11 from the field and 8-10 from the free throw line, while Pitt still couldn’t get much going, shooting 6-15, or 40 percent, from the field.

Gillespie led the Seminoles with eight points in the quarter on two 3-pointers and a layup to give her a game-high 18 points. Myers chipped in seven points on three layups and a free throw, Ekhomu made four free throws, Jones had a layup and a free throw and both Woolfolk and redshirt first-year guard Sayawni Lassiter scored two points to round out the scoring for Florida State.

Garven once again led the Panthers in the fourth quarter with six points, giving her a team-high 14 on the day. Walsh and Judkins each scored three points, and Knight chipped in four to have Pitt score 18 in the quarter. Walsh finally hit a 3-pointer for the first time since the first quarter, highlighting a bad day from 3-point land for the Panthers as they shot 3-18, or 16.7 percent.

Pitt will look to bounce back from this tough loss as they travel to upstate New York on Thursday to take on Syracuse in the Carrier Dome.