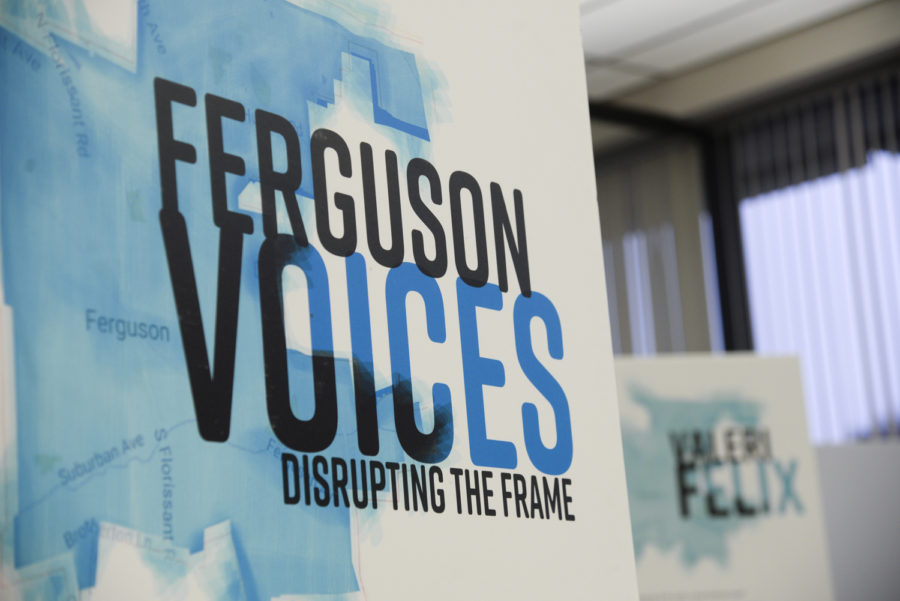 “Ferguson Voices” was created by students at the University of Dayton working in conjunction with PROOF Media for Social Justice to draw attention to problems of state violence and structural racism.

By Nithil Harris Manimaran, For The Pitt News

Pitt students walking through the front doors of Hillman Library during the month of February are greeted by a quote on one of the exhibits featuring Elizabeth Vega, a Chicana artist and educator from Ferguson, Missouri.

“Activism is believing that people can be persuaded to act in a collective way that also benefits their humanity,” the quote reads.

This quote is part of Ferguson Voices: Disrupting the Frame, a collaborative initiative between PROOF: Media for Social Justice and the University of Dayton Human Rights Center commemorating the life and death of Michael Brown Jr. The exhibit at Pitt is being featured in the lobby of Hillman Library throughout February in support of Black History Month.

PROOF is a nonprofit organization based in New York City that uses visual storytelling to inspire attitude and policy changes across the globe. “Ferguson Voices” was launched in January 2017, then under the name of “The Moral Courage Project.” The multimedia storytelling initiative consists of a physical traveling exhibit and a podcast, and is based on original interviews and photographs collected in 2016.

The physical exhibit on the first floor of Hillman consists of more than a dozen standing banners, with half featuring portraits of Ferguson residents — taken by photographer Mark Katzman — whose lives were touched by the death of Brown after he was shot by a Ferguson police officer in 2014. Quotes taken from interviews conducted in 2016 with those Ferguson residents, including Vega, are featured on the other half. The full interviews, along with several hours’ worth of other interviews with more residents, can be found at www.fergusonvoices.org.

Brown, a black teenager, was shot and killed by a white police officer in Ferguson on Aug. 9, 2014. The officer, Darren Wilson, claimed Brown was violent and he shot him in self-defense. Police accused Brown of robbing a convenience store minutes before the shooting. Brown had no prior criminal record and was unarmed.

When Wilson was not indicted by the grand jury, the situation escalated, resulting in militarization of the police. The incident stirred unrest among the residents of Ferguson, who took to the streets with the slogan “Hands up, don’t shoot.” By the end of the final wave of protests, more than 300 members of the public were arrested.

Michael Goodhart, director of the Global Studies Center at Pitt, offered his own perspective on the protests.

“While there are many similar incidents [to Ferguson], I don’t know of any similar exhibits that combine a physical and an online presence and offer a comprehensive treatment of the context surrounding the infamous events themselves,” Goodhart said.

According to Goodhart, the GSC believes this project would deepen conversations on such issues that are widespread globally and are not just unique to the United States.

“Global Studies mobilized partners to bring the exhibit to campus, not because Ferguson and the killing of Michael Brown are somehow more important than other examples of police violence or structural racism, but because the exhibit gives us an opportunity to think about the broader issues in transnational perspective — to think about the global processes and connections that help to shape the racial regime in the United States today,” he said.

“What happened in Ferguson and what the implications of that are [not only] for things like the ‘Black Lives Matter’ movement, but also to recognize that what we’re offering is a different angle on these events that cause people to relate them to developments elsewhere in the world,” Rouse said.

The idea behind this is to create an atmosphere that enables students and faculty to consider these events in new perspectives that may contribute to a deeper understanding of the processes behind them, Goodhart said.

“Our primary goals in bringing the exhibit were to draw attention to global dimensions of the problems of state violence and structural racism, and to provide a space for conversation about these issues,” Goodhart said. “I hope the event inspires students to think about the broader social impact they can have and want to have.”

The GSC and its partners have planned a series of events to take place throughout the month to bolster the exhibit. Upcoming events include an interactive session titled “Racial Regimes in Transnational Context” with Dr. Michael Hanchard, chair of the Africana studies department at the University of Pennsylvania, and a hands-on community writing workshop with poets and artists Saretta Morgan and Bekezela Mguni, whose work focuses on social justice issues.

Abhijith Segu, a Ph.D. student from India in the chemical engineering department at Pitt, said the exhibit made him reflect on his own experience in the United States.

“I traveled halfway across the globe, like many aspiring people who come to this country, to focus on my education, to learn,” Segu said. “We come here expecting better experiences, and the most important thing we can do is be broad-minded and communicate better. What we can do now is learn from the past and move on to a better future.”

According to Rouse, Ferguson Voices encourages people to step forward and talk about the event in ways that other exhibits about Ferguson haven’t.

“The whole point is to encourage more conversation,” Rouse said.