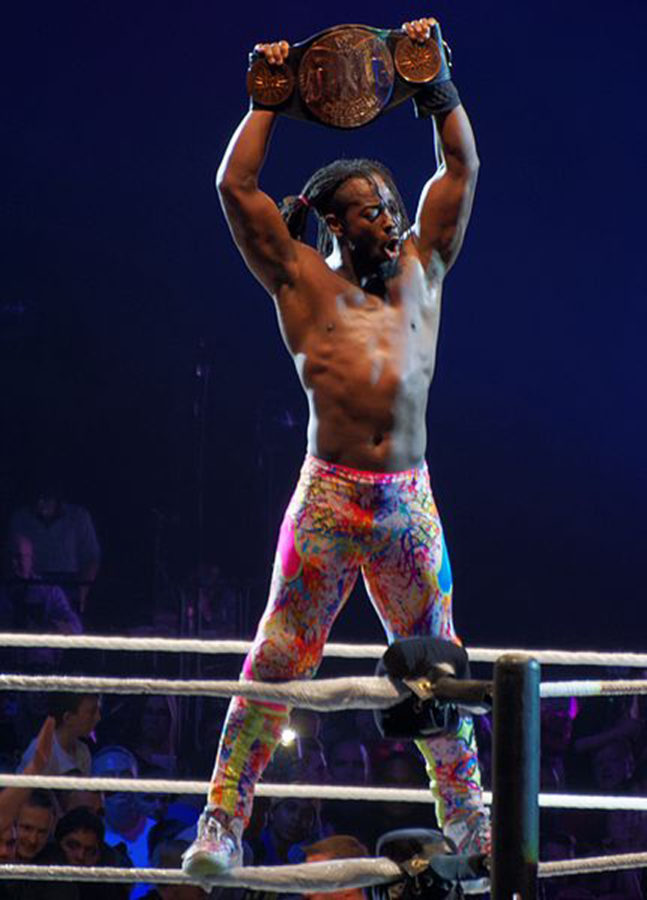 WWE superstar Kofi Kingston is in his late 30s and still has as much dexterity and agility as an Olympic gymnast, but has yet to hold a world title in WWE.

At the “Elimination Chamber” pay-per-view Sunday, Kingston got a chance at one in an elimination chamber match with an enthusiastic crowd fully on his side in the Toyota Center in Houston.

But WWE still couldn’t — or rather, wouldn’t — pull the trigger on giving him the belt. WWE hasn’t had a black world champion since Mark Henry’s 2011 stint with the World Heavyweight Championship.

Kingston has been a reliable worker for the company since his main-roster debut in 2008, providing countless entertaining matchups as well as just being a fun performer to watch. He has had main-event and championship caliber his whole career. He has also won multiple lower-card and tag team titles, so it’s curious that Kingston hasn’t drawn WWE’s eyes as a potential face of the company.

In fact, Kingston wasn’t even supposed to be part of the chamber match in the first place — he replaced an injured Mustafa Ali. Ali is still too green in the ring to hold a world title, so it seemed that putting Kingston in his place would still serve as a throwaway character.

But on last week’s episode of “SmackDown LIVE,” Kingston earned the iron man moniker during a gauntlet match to determine which superstar would enter the chamber match last, which is a huge advantage. Competing for more than an hour, Kingston managed to eliminate three competitors before tapping out to A.J. Styles. While that accolade wouldn’t do Kingston any favors in the chamber, it showed a hint of hope that WWE might finally greenlight a long overdue Kingston world title run.

At Sunday’s show, Kingston entered the match third out of six men, already putting him at a disadvantage. But The New Day’s head guy performed as spot-on as ever, delivering fun spots and exciting offense throughout his duration in the ring.

Seeing him compete one-on-one with WWE Champion Daniel Bryan as the last two men in the main-event chamber match felt just like 2009, when it felt certain that the newcomer would cement himself as a young champion. Kingston was able to counter and endure Bryan’s signature offense for much longer than anticipated, but wasn’t able to capitalize in the end.

Since WrestleMania is fewer than two months away, it would normally be strange to have a title change so close to the show — despite the three that happened earlier in the PPV. The veteran Kingston deserves not only a lengthy run with a big championship, but also his first singles match on the grandest stage of them all.

Kingston has competed in nine WrestleManias so far, but only in multi-man matches. While he still shines in a crowded ring, like during his famous Royal Rumble elimination saves every year, it is a crime that he hasn’t been able to show his true wrestling ability at WWE’s equivalent of the Super Bowl.

While The New Day could have just been the tag team of three black men whom WWE had no idea what to do with, the team has soared since its inception without looking back.

Professional wrestling is weird, which is why it makes total sense to have pancakes or cereal thrown at you during a show. Crowds across the world cheer hard for The New Day and its power of positivity, but it’s almost shocking that it’s still intact, considering Kingston’s starpower eliminates the team from the “greater than the sum of its parts” mold.

The pairing certainly helped Xavier Woods and Big E become more mainstream names, but being in a goofy gimmick for as long as he has really isn’t doing much for Kingston’s long-term career. The man is 37 years old and is certainly not the oldest performer in WWE, but wrestlers competing after their prime usually don’t have the success they imagine.

If WWE ever hopes to rake in the profits that a Kingston world title reign will bring, he needs to be in that picture within at least the next four years. WWE is notorious for treating its tag team division poorly or as an afterthought, and avoiding singles competition could lead Kingston into obsoletion.

Even if the company is dead set on keeping The New Day together, it should entertain the idea of letting Woods, Big E and Kingston also compete as individuals. Sure, it’s entertaining when The New Day freebirds their tag titles, but imagine how much better The New Day would be if it consisted of WWE Champion Kingston flanked by the now six-time tag team champs, Woods and Big E.

The New Day could be what WWE wanted the Nation of Domination to be — a staple promoting and displaying black excellence.

Based on the crowd reaction at the “Elimination Chamber,” Kingston would make a wonderful babyface champion who could appeal to child and adult fans alike as well as sell tons of merch. That’s a win-win for WWE and its fans.

WWE’s next PPV on the road to WrestleMania is “Fastlane,” at the Quicken Loans Arena in Cleveland, Ohio, on Sunday, March 10. The show kicks off at 7 p.m. live on the WWE Network.