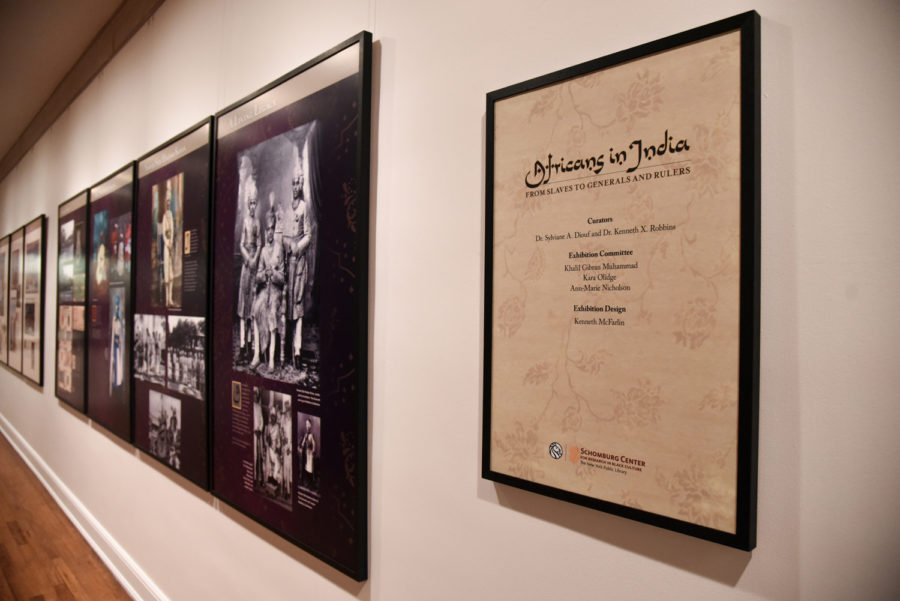 The “Africans in India” exhibition is open at Pitt until March 21.

Clad in a regal white gown and holding a red sword, 17th-century Ethiopian military leader Malik Ambar is painted on a green canvas now sitting in the Frick Fine Arts building. His image is centered in the frame and occupying all of the space. His history and legacy as an African elite in India was unknown and forgotten until very recently.

This painting is one of many featured in the exhibition “Africans in India” that recently arrived at Pitt’s University Art Gallery in the Frick Fine Arts building. The exhibit opened on Friday in celebration of Black History Month and the United Nations International Decade for People of African Descent (2015-2024), with a reception and introductory talk by guest speakers, including psychiatrist and author Dr. Kenneth X. Robbins, University of North Carolina at Greensboro historian Dr. Omar H. Ali and University of Chicago doctoral candidate Jazmin Graves.

The exhibition was originally curated by Robbins and historian Sylviane Diouf for the New York Public Library’s Schomburg Center for Research in Black Culture and is on loan to Pitt until March 21, with a closing reception and film screening on March 18. It features paintings and text that showcase the histories of various African elites in India who rose from the ranks of slaves and had a large impact on the art and politics of the country.

Africans first arrived in India beginning in the fifth century as soldiers, sailors, merchants and slaves. Many of their descendants still live in India today as members of the Siddi minority.

The exhibition works to highlight an otherwise forgotten and erased history, giving recognition to the many African elites and Indians of African descent and their contributions to India.

“It’s really great to have it be at a university that gives it the gravitas and the legitimacy that it deserves and for students and people in the community to be able to access it,” Ali, the first speaker of the evening, said. “It’s a wonderful teaching opportunity.”

Ali is a professor of comparative African Diaspora history and the dean of the Lloyd International Honors College at UNC Greensboro. His most recent book, “Malik Ambar: Power and Slavery Across the Indian Ocean,” is a biography of Ambar. Ambar was an emblematic example of the African presence in India and the connections between Africa and India.

Ambar was captured as a slave in Ethiopia, educated by his master in Baghdad and then brought to India, where he rose to the rank of a general and ruler of a Southern Indian principality. He represents one of many African slaves who were to rise through the military slave system to an elite position of high official rank. The exhibition features two paintings of Ambar.

Ali stressed the importance of recognizing the amount of work that went into producing the traveling “Africans in India” exhibition, based on scholarship by experts in the field. The content is grounded in primary sources and material culture such as paintings, coins, architecture and manuscripts.

The African Heritage Nationality Room, one of the sponsors of the exhibition, has helped publicize the exhibition in the Pittsburgh community.

Graves, whose research at the University of Chicago focuses on the African-Indian Sufi tradition in western India, spoke after Ali. She focused on the power of images, specifically how it is the material media, architecture and artwork left behind by African elites that provides access to their history and legacies.

“It’s important to understand that the legacy of African elites is one that’s tangible, not only in the monuments, the artworks, the literature, the coins, but also in the Indians of African descent who are here today,” Graves said.

She described the “jaali,” or window lattice, found in the western wall of African elite Sidi Saiyyid’s 16th-century mosque in Ahmedabad, Gujarat, a state in India. A photograph of this jaali is featured in the exhibition.

There is a plaque near this mosque that reads, “This mosque was built in 1572-1573 by Siddi Sahid, an Abyssinian from Yemen.” It is through these artifacts that tangible proof can be seen of the stories of the formerly enslaved Africans rising to positions of power in India.

“You see these enlarged images of all the African elites of India and that leaves a visual impression,” Graves said. “So just the fact that it’s easily accessible and it’s just so visible is really something that’s going to be impactful.”

Leslie Rose, a University of Pittsburgh Hot Metal Bridge Fellow in art history who curated the exhibition “Movements,” adjacent to “Africans in India,” found the exhibit to be impressionable and important.

“I think projects like this bring attention to a history that’s untold,” Rose said. “What I was trying to do was draw connections that people might not have heard about or learned in history, and thinking about how that works in terms of the expressions and representations of black people across the globe.”

The third speaker, Robbins, a psychiatrist who has written a number of books about Africans and Jews in India such as “African Elites in India: Habshi Amarat,” was the original co-curator of the exhibition. His interest in the African diaspora in India was sparked by his hobby of collecting paintings, when he discovered the presence of Africans in paintings from the 17th to the 19th centuries, as well as ancient Ethiopian coins in India.

Robbins discussed the images of Africans on coins in Bengal, a region of India. It was difficult to identify the Africans in paintings or other artifacts because skin color alone was not enough of a determining factor. The clothing — and more importantly, the names — of these people gave more of a clue to their African identity. If they were called Habshis, they were of African descent, because this was a local name for Abyssinians or Ethiopians.

He concluded his discussion by talking about the educational purpose of the exhibit as a whole and the hope it gives him.

“The idea is to create a collection that any scholar who comes to this exhibit will find things that they didn’t know about,” said Robbins. “It will lead them in a new direction.”

The gallery at Frick Fine Arts is open on weekdays from 10 a.m. to 4 p.m. with extended hours on Thursdays up to 7 p.m. It is closed on weekends. “Africans in India” will be on display through March 21.